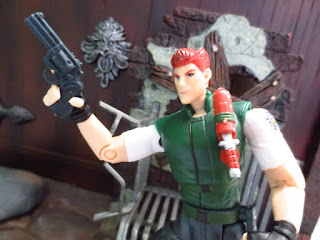 Merry Christmas Eve! Today's toyline on the list of my 12 favorite toylines of all time is Video Game Superstars Presents: Capcom's Resident Evil by Toy Biz. Released by Toy Biz in 1998, the line had three series of figures that covered characters from Resident Evil and Resident Evil 2. It might sound kind of odd but I have really strong, nostalgic memories of this line. At the time when these were released video game based action figures were actually somewhat of a rarity, so these were a very big deal at the time. There have been many Resident Evil toys made by different companies but few have ever been as expansive as the Toy Biz line. For as massive of an entertainment property as Resident Evil is, no company seems able to sustain a toyline for very long. I've actually reviewed the entire line previously, so rather than offer a review I'm going to post links to all of the previous reviews and then share my wish list for a hypothetical fourth series.

If we were getting a fourth series of figures, I would stick to characters who would have conceivably been available at the time, including some characters from Resident Evil 3: Nemesis that was reeleased in 1999. Remember that these were largely offered as two-packs, so here's who I would pick: