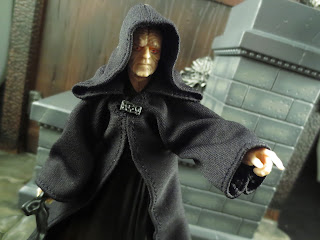 While things have improved a little bit, over the past few years Hasbro has had some terrible distribution for their Star Wars product line. I'm talking bad. If Hasbro were an Imperial-class Star Destroyer, Vader would be on board force choking fools. That's how bad their distribution has been. Honestly, I kind of hoped that things were going to improve with the release of The Force Awakens so I held off on ordering some of the Star Wars: The Black Series Phase II figures from online sources. Well, now that we're knee deep in the middle of Phase III, I decided to jump in and pick up a few figures I missed. Fortunately, ol' Emperor Sheev Palpative (AKA Darth Sidious, AKA Big Papa Juicemaker) wasn't very expensive. Honestly, I ordered him online for less than I would have paid retail. The Emperor is one of those figures that I initially passed on but then recently decided I wanted to own. I mean, I'm sure we'll get a Darth Sidious at some point but who knows if and when Hasbro will ever revisit a Return of the Jedi styled Emperor in the 6-inch scale? Emperor Palpatine is a very middle of the road Black Series figure and presents a great example of what Hasbro needs to do to improve this line. Ready for a closer look at Sheev? Then join me after the break... 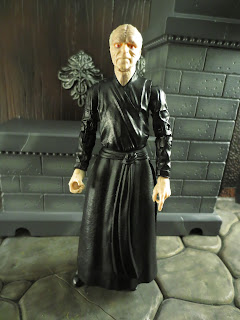 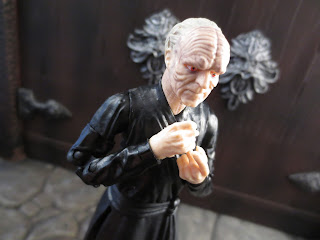 * For an old man, Palpatine is more articulated than most other figures in this line. Besides all of the basic stuff, Palpatine also has double hinged elbows with a bicep swivel. That's incredible and completely unexpected! I wish more figures in the series had those, but as it allows Sheev to put his hands together in all sorts of wicked poses I'm in favor of them. 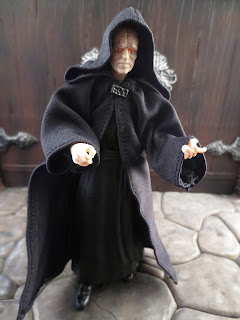 * Cloth goods are definitely a polarizing subject among action figure fans. Some folks love them and some folks dislike them with the fiery passionate hate that Anakin reserved only for the sands of Tatooine, but I find myself somewhere in the middle. I love soft goods when used for cloaks and robes and Palpatine's looks pretty nice. It's a little baggier but overall much nicer than what a full body plastic robe would have offered. It doesn't inhibit Palpatine's movement at all and drapes nicely over his smaller frame. The material seems to be of a fairly high quality and even has a plastic clasp that keeps things shut. This is definitely an improvement over the "salt and pepper shaker" Emperor Palpatine figures we got in the vintage and POTF2 lines. 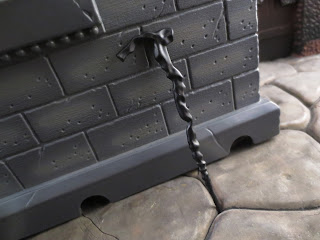 * Other than his robe, which is vital to his appearance, Palpatine's sole accessory is his cane. An unidentified Sith artifact which Sheev uses to appear weaker and frailer than he is, the cane is designed to accommodate him in a bit of a hunched over position. The cane is really nicely sculpted and fits perfectly in either hand. 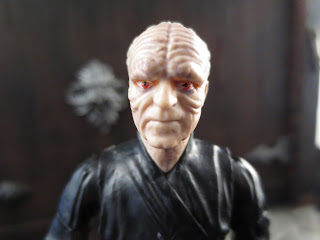 * I'm going to address the sculpt in a second (I'm not a fan) but the paintwork on the eyes and skin looks pretty good. The eyes are well detailed and Sheev's skin has a creepy pallor to it. 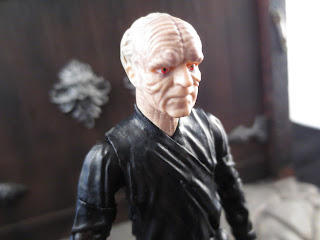 * This just does not look like a Return of the Jedi era Emperor Palpatine to me. It doesn't. The brow looks too large and the wrinkles under the eyes just aren't right. It looks more like Gary Oldman's Dracula without the weird hair. Honestly, it's been awhile since Hasbro has released a good sculpt of the Emperor and I'm sad that they failed again. 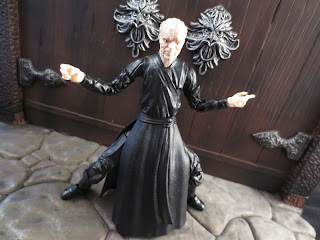 * When you think of stuff that Emperor Palpatine does, what is the first thing that comes to mind? My guess is that you either said zap people with Force lightning or sit in that funky space chair. I'm going to address the Force lightning in a second, but I first want to address that Palpatine can't sit. While he has a soft outer robe, the skirt of his inner robe is made from a semi-hard plastic that definitely won't allow him to sit. I usually wouldn't be hung up on this, but Palpatine is all about sitting and chillaxing. It's what he does. 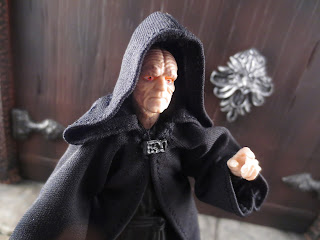 * Palpatine's a master of the Dark Side and has shown his combat prowess in utilizing lethal Force lightning and his lightsaber to slaughter those who oppose him. Sadly, Hasbro didn't include either of those accessories with him. Yeah, he didn't use the lightsaber in Jedi, but the Empire Strikes Back Yoda came with his lightsaber so it seems like a precedent was set. Missing some Force lightning bolts was a huge misstep, though. I mean, that's what Palpatine does: He zaps people! 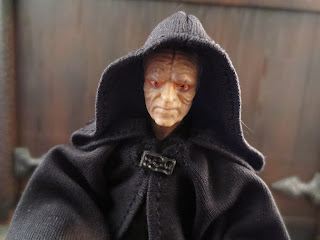 When he has his robe on and is carrying his cane, Palpatine's a decent figure. I'm just disappointed that Hasbro really messed up the headsculpt as this looks far more like a Revenge of the Sith Palpatine than an Original Trilogy Palpatine. The lack of accessories is the biggest negative, though. I can see Palpatine having no lightsaber, but no Force lightning? That's a crime! Sheev sits and shoots Force lightning, and the fact that this figure can't do either of those things really sours me on this guy. I'm giving this guy a Good, but deserves a better figure.


If you're looking for more figures of the Emperor, please check out my review of the Hero Mashers two-pack with Yoda Vs. Emperor Palpatine.