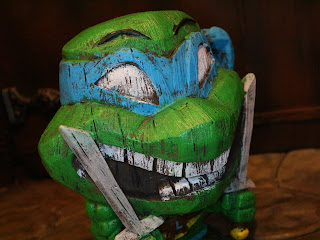 Recently FOCO reached out to me and asked if they could send me some toys to check out and review. There are two things I never turn down and one of them is free toys (the other is smoked salmon) so I definitely let FOCO know they could ship some stuff to the top secret lair/ studio of Action Figure Barbecue Worldwide Limited.  FOCO sent me a few of the Teenage Mutant Ninja Turtles Eekeez figures and first up I'm checking out Leonardo. Leonardo was released as part of the first series of TMNT Eekeez which I believe released in January of this year. Alongside Raphael and the Shredder, Leonardo introduced FOCO's line of tiki inspired resin mini-statues to the masses. Let's check out Leonardo a bit more closely after the break... 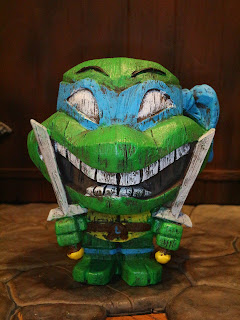 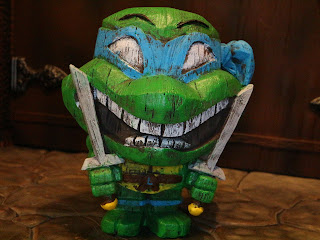 * Stylized figures can be hit or miss as you have to take into account how the original source material will mesh with the new, stylized depiction. Fortunately, I think the Turtles blend well with nearly anything and thus FOCO has delivered a really cool collectible. While he's made of resin, Leonardo really does look like a worn and weathered painted tiki statue. The aesthetic works really well with the character and makes for a cool and fairly unique looking TMNT collectible. 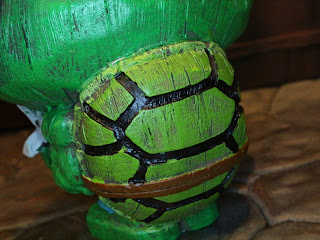 * The paintwork really does help sell the idea that these are weathered, rough, wood sculpted tiki statues. Again, while these are sculpted from resin the paintwork and texture really make these seem like wood carvings. I honestly thought the figure was made of wood until I got it out of the package. 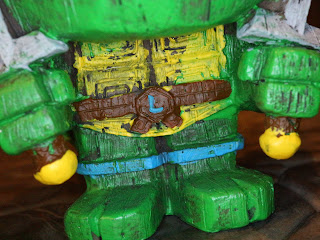 * There's a lot of detail here and the way it is handled is part of the charm. Everything you'd expect from Leo is here: The belt, pads, plastron, etc., but the paint coverage is rough and somewhat intentionally messy to help sell the handcrafted vibe. Glance at this guy from just a few feet away and it blends together seamlessly. 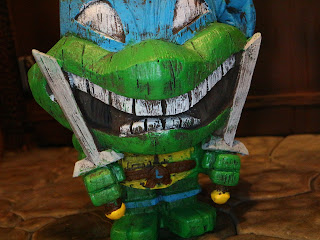 * I love the expression on Leonardo's face. It's clearly a classic animated depiction of Lenardo, but that's probably the most popular depiction, right? The teeth look great and add a lot of personality to the figure. Again, I don't think this style would work for every property but it suits the TMNT really, really well. 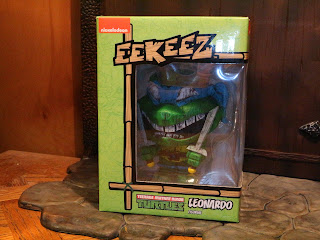 I was only barely familiar with Eekeez before receiving these from FOCO but I have to say that I'm impressed. They really do have a very charming, handmade feel to them. This is definitely something that might attract some attention if you placed it on your desk or on the mantle in your living room. They have a very unusual charm and feel much more substantial than a number of other comparable stylized figures. I bet the TMNT look slick as a set! 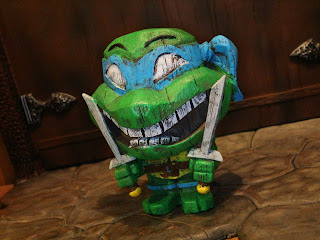 Leonardo is a Great collectible. I know it's getting really close to Christmas but if you have a TMNT fan in your life to shop for, these wouldn't be a bad selection. They're fun, funky, and definitely less expensive than I thought they would be. They're classy collectibles and their handcrafted appearance really makes them standout. If you dig them check around at your favorite e-tailers, specialty stores, or visit Foco's website. These are actually some really cool depictions of the turtles and I really think I might complete the set of four. Not every property seems made for this style but it works swimmingly for the TMNT.


I've reviewed a few Leonardo action figures on the site including the TMNT 2012 Playmates Battle Shell Leonardo, the Ninjas in Training Leonardo and Donatello, and Stealth Tech Leonardo, and the TMNT Classics Secret of the Ooze Leonardo.

The subject of this review was provided to me free of charge by FOCO.
Posted by Barbecue17 at 12/22/2018