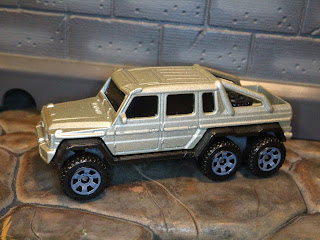 Here's another somewhat obscure from Jurassic World and Fallen Kingdom released in Mattel's Matchbox: Jurassic World series: The Mercedes-Benz G63 AMG 6x6. This is another of those vehicles that I couldn't recall from the film but, after checking out the incredibly informative Jurassic Park Wiki, my memory was jogged. The InGen security team drives one of these in Jurassic World during and apparently one shows up at the creepy old Lockwood Estate in Fallen Kingdom. It's definitely another vehicle that doesn't scream Jurassic Park to me but I'm still digging the line, so why not, right? Let's check it out after the break... 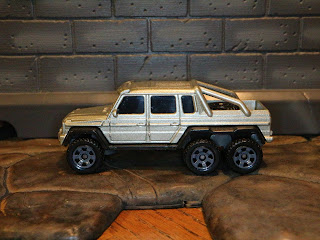 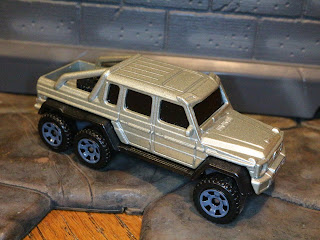 * The Mercedes-Benz G63 AMG 6x6 has a darn long name. It's also a fairly long vehicle with a full sized cab and a pretty expansive pickup styled back as well. The license plate on the front matches the one seen in Jurassic World (G-012) meaning this is the vehicle that transports the Asset Containment Unit when they're going after the Indominus Rex. 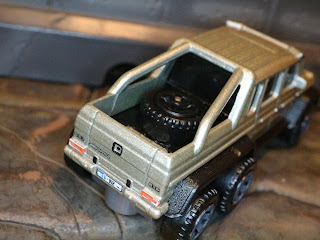 * The back license plate and various logos are all printed on, quite sharply I might add. G63, AMG, and 6x6 are all visible. There is also a spare tire in the back. 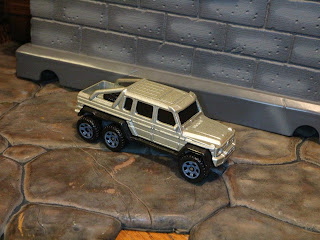 While it's not one of the most recognizable vehicles from the films, the Mercedes-Benz G63 AMG 6x6 is a really cool addition to the line. I like the size, the sculpt, the paintwork, and the painted details and logos. There's a lot more going on here than you might think, making for a Great vehicle. While Matchbox cars are largely plastic (versus Hot Wheels which feature diecast metal), they're still solid little models. This one turned out to be a surprise favorite for me.