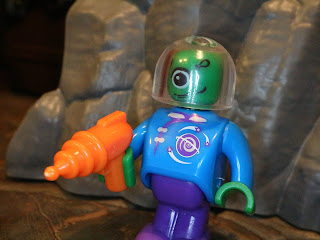 Last month while grocery shopping for Thanksgiving at Lidl my daughter and I stumbled upon a series of blindbagged minifigures from Playtive Junior, a product range of kids toys that seems to be solely distributed by Lidl. They have lots of wooden food items, toy cars, games, and such, but the little blindbagged minifigures definitely were what caught my attention. Most of the minifigures were pretty standard things (traffic cop, doctor, Sherlock Holmes styled detective) but the Alien stood out t me. Thanks to his domed helmet he was easy to find and I picked him up for the somewhat steep price of.... $1! Yup! These little guys retail for $1. I'm not that into the rest of them (I do dig the Sherlock Holmes, I guess) but the Alien was a must have, especially for the price. He's a very traditional looking space alien design and seems like something out of a 50s or 60s low-budget sci-fi film. Let's take a look at him a bit more closely after the break... 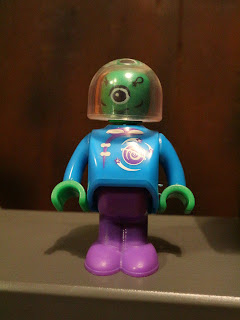 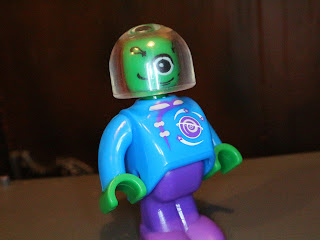 
* I just like the look of this guy. He's very simple but the green skin, unusual body shape, and shirt design that kind of reminds me of the 1980s Lego Space figures won me over. 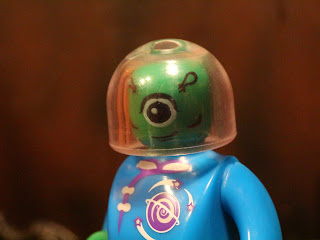 * The single eye and the antennae are painted but they look cool. I love the clear dome, though. It reminds me of the domes from an 80's building toy series I can't quite remember the name of but that I owned. I don't think it was Construx. Wait, it was Zaks! Remember Zaks? And here's a picture of the dome! They could be used as eyes, heads for space figures, or placed on G.I. Joe figures to make diving helmets. 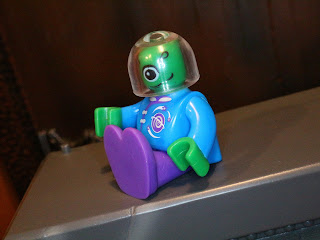 * The Playtive Junior minifigures do have some articulation, kind of like a Playmobil Klicky, actually. The waist is hinged while the arms and neck are simple swivels. He feels durable and well made. 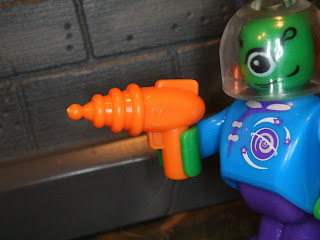 * I dig the laser pistol, too. That's a cool extra that makes the figure just a bit more fun. It's bright orange and has a great retro feel to it. 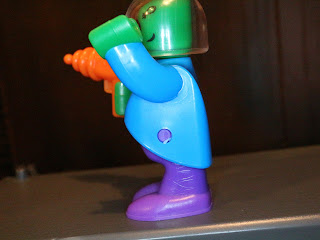 * The side of the figure looks a bit odd and the legs seem to have scratches in the plastic. It's not terribly noticeable but it is a bit odd. 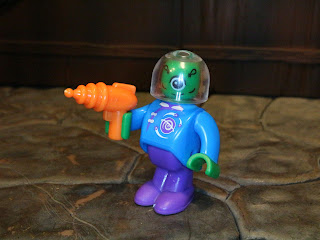 For a buck this is a pretty cool little minifigure. I'm not terribly excited by the rest of the offerings but I can definitely understand that other minifigure collectors might dig them. A dollar is a nice deal on an articulated minifigure like this, especially one that's kind of cool with a vintage feel like the Alien. He's a Good and a 1/2 little toy and definitely worth hunting down if you have a Lidl near you (it's a German discount grocery chain that is a rival of Aldi). These don't make for bad stocking stuffers, either, so you might want to hit them up during your Christmas shopping.


This is the first figure from the Playtive Junior line that I've reviewed on Action Figure Barbecue.
Posted by Barbecue17 at 12/08/2018