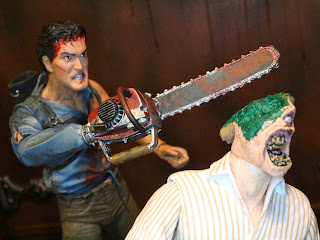 While the had released a handful of figures from Army of Darkness over the years, in 2012 NECA finally released some action figures from Evil Dead 2: Dead by Dawn. It's been a few years since then but NECA did release a deluxe Ultimate Ash in 2016 that largely reused pieces from the previous sets with improved leg articulation. NECA has teased this set for a few years, however, and it finally made it out this year. This set includes the "Hero" Ash figure, which features Ash Williams in his standard outfit with a ripped, bloody shirt, and "Evil" Ed Getley, Professor Knowby's assistant who becomes a deadite. It's a good concept for a two-pack as we get one tweaked Ash with lots of accessories and a brand new deadite figure. I like it and I hope that we see a few more Evil Dead figures at some point (NECA needs to take a swing at the Pit Witch from Army of Darkness, Evil Ash, and some characters from the original film). I recently received this set as a gift and I'm eager to take a look at it. Let's check it out after the break... 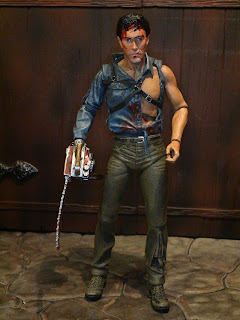 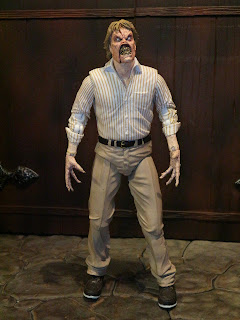 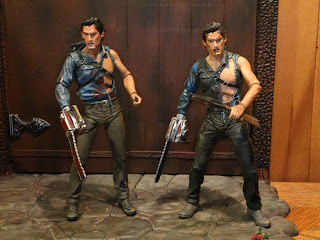 * Here's a shot of this set's Hero Ash (left) with NECA's 2012 Hero Ash (right).  The biggest difference between these figures is presence of swivel/hinge hips. The 2012 Evil Dead II: Dead by Dawn figures were kind of an evolutionary link between NECA's static Cult Classics styled figures and the Rocky line which showed NECA really starting to offer some fully poseable figures. While Ed is a thoroughly modern figure, Ash does feel a bit dated, although fans will notice the minor improvements. 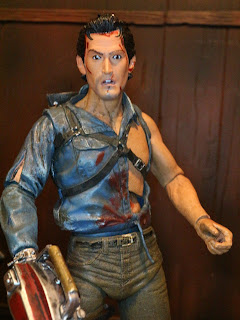 * Despite being over 6 years old, NECA's Ash sculpt still holds up quite well. In fact, the work on the body and clothes is still downright impressive as it features lots of detail. Ash's shirt is a separate piece from his torso, so the figure really displays a very layered appearance that makes for added realism. You've also got some great paintwork, particularly on the grime and blood spatter on Ash's shirt. It's groovy and I dig it. 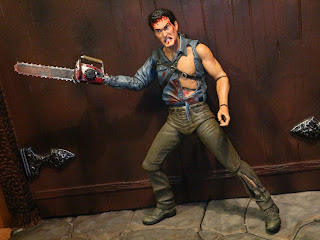 * NECA did improve the articulation in the legs, so you should definitely be able to get more poses out of Ash. The hip joints are new but it's amazing how much better the figure is with them. 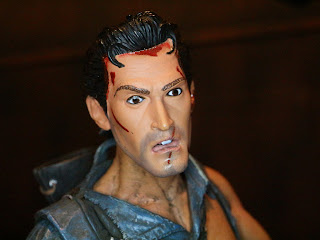 * Ash includes three headsculpts to give your figure a variety of expressions. I believe two of the three are truly new but the paint applications make the third feel new, too. They take a little effort to switch out, but a good, firm pull should help. First up is the somewhat wide eyes, open mouthed appearance. Hero Ash had this portrait and it came with the Ultimate Ash as well. It's pretty solid and definitely looks like a younger Bruce Campbell. Remember that Bruce's appearance really seemed to change a good bit between Evil Dead 2 and Army of Darkness, so this is far more accurate than I think most folks will realize at first. 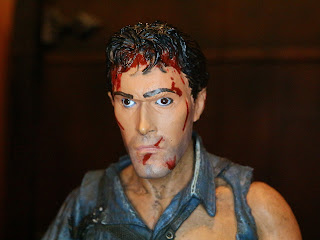 * Next up is what I believe is the first new headsculpt. It's a standard, neutral Ash sculpt. The features are all still accurate though it's unusual to see an inexpressive Ash. To be honest, this one makes me think of Ash from The Evil Dead rather than an Evil Dead II Ash. Still, I like it. The blood paint applications are quite solid and the paintwork all around is nice. The stubble is pretty good, too. Not too heavy nor too light. 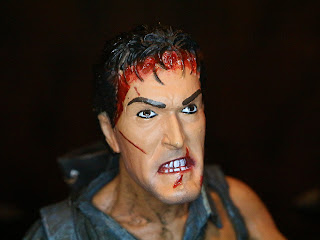 * My favorite headsculpt is the angry Ash headsculpt. I love the open mouth, gritted teeth, and angry eyebrows. This is Ash at his angriest and he's ready to carve up some Deadites. This is my favorite of the three just because it goes so well with the set and it fairly different than what we've seen in the line thus far. 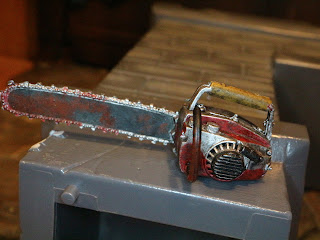 * Here's a look at Ash's chainsaw. It isn't intended to be removable, but it can be removed. More on that in a moment. Still, the accuracy and the paintwork is amazing. I'm a sucker for chainsaw accessories (don't judge me) and this one is a great one. This is another piece that is the same as the Hero Ash figure, but the paint is so much of an improvement that it doesn't even look the same. 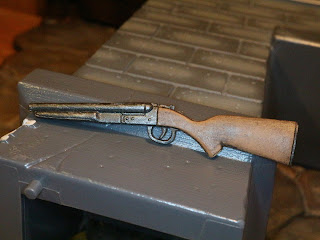 * Can you have an Ash figure without a boomstick? The answer is no, you cannot. It's another reused item but who cares, right? I'm also a sucker for double barreled shotguns. Seriously, those are two of my favorite action figure accessories. 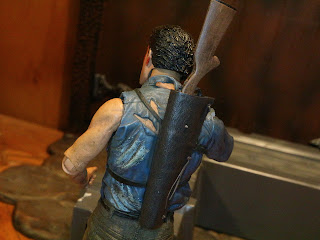 * If you're gonna have an Ash figure with his sawed-off, you gotta have a place for him to store it. This Ash does. He also has lots of rips and detail on his back. To quote the Rock from Moana, "You're Welcome!" 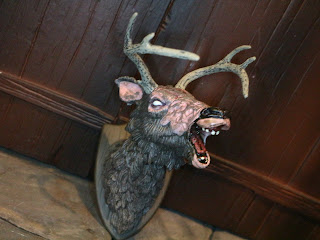 * Another reused accessory is the laughing mounted deer head. It's still an incredible accessory and a cool inclusion (it didn't come with the Ultimate Ash figure) that makes sense here. Remember that the deer does have a balljointed head, so he can move around and mock Ash. 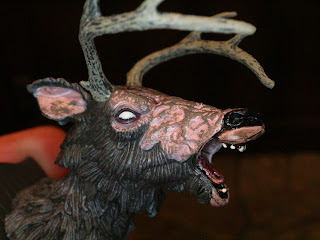 * The paintwork is so much improved here that it makes the head look like a new sculpt. The rotted flesh and the fur looks so much mangier now! 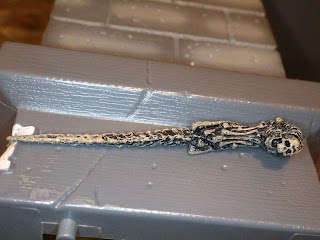 * One of the new accessories is the Kandarian dagger and, wow, this is a pretty slick accessory. The sculpt is sharp with lots of detail and a great paintwash to give it a very life-like appearance. I'm loving this as it really offers something new to the line. 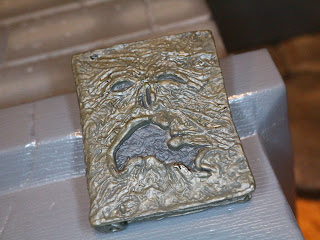 * Of course, you gotta have a copy of the Necronomicon. This one has a better surprise than most, however... 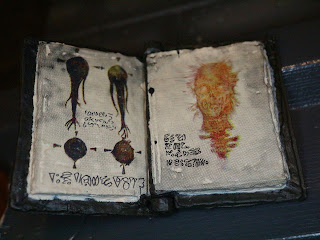 * It opens! It opens! Look at this! The Necronomicon opens up and you can see some of the images from the book printed on the inside. How cool is this? This is accessory of the year stuff right here, believe men. Just don't try to translate it... 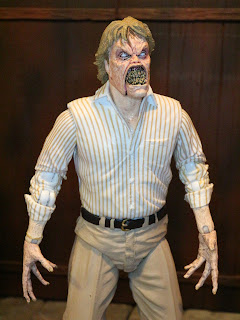 * The second figure in the set is Ed Getley, aka Evil Ed. The marketing for this set constantly calls him Evil Ed although anytime I hear that I think of Fright Night. This guy is awesome. He's a fully new sculpt and he shows off many of the advances NECA has made over the years. While he's a dude in khaki pants and a button up shirt, the sculpt is solid and the demonic expression is insane! 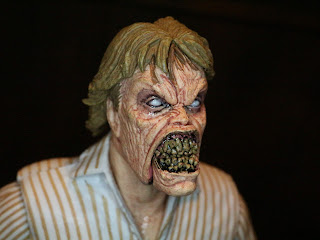 * This is easily one of the best headsculpts of the year. Look at that! That is pure nightmare fuel. I don't even need to talk about it much. Just look at it! Yikes! 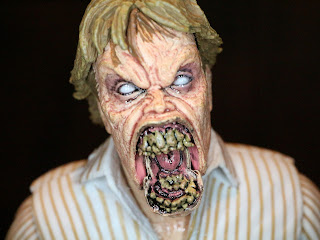 * So, not only is the portrait incredible but the jaw is hinged! It opens up and shows off some incredibly terrifying teeth. The paint, the sculpt, this is easiest one of the best I've seen this year. 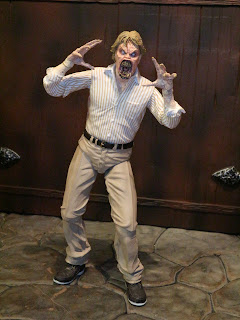 * The articulation is really good here. It's much better than Ash's articulation as it features really useful double jointed elbows that allow for some great, expressive poses. This guy would be tons of fun to pose with a stand that allows for "floating" poses. The Deadites are creepy suckers and you can really convey that with this guy's articulation. 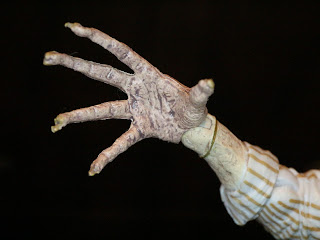 * The hands are icky! They should be. Score! 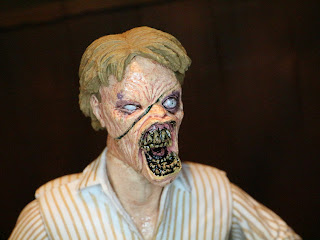 * Ed Getley comes with a second head that features some battle damage (and a hinged jaw again, as well). He's got a big cut in his face. What's that for? 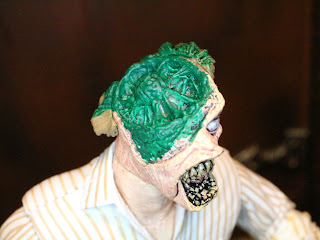 * Because it can be cut in half, that's why. Yup! You can have Ash really slaughter this baddie and send him right back to Hell. That is a fun play feature if I've ever heard of one, I'll tell you what. Look at the crazy green brain inside this guy's corrupted head. Nice! 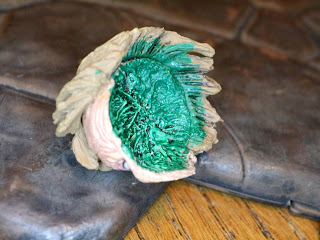 * Here's the top of the head. It's an extra piece and looks great just strewn about by Ash's feet. Lots of icky detail here, too. 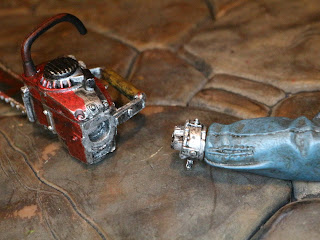 * So.. it isn't broken but while posing Ash his chainsaw did come off. It will go back on (or could easily be glued as it was glued originally) but it ca fall off again. Kind of weird, but more of an annoyance and minor QC issue than an outright defect. 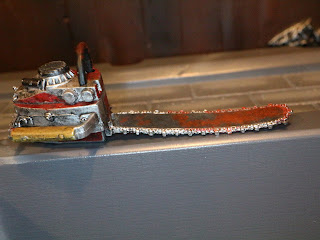 * The chainsaw blade looks amazing but it's kind of rubbery and has a wilted appearance to it. 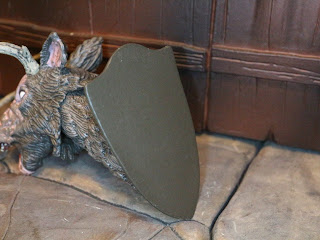 * I love the deer head, but it would have been tremendously improved if it had some kind of hole or bracket to hang it with. As it is, you'll have to use tape, glue, or sticky tack to mount it to something. 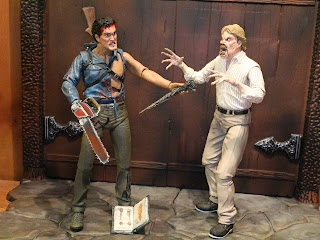 Despite the issue with Ash's chainsaw, this is an Epic set. NECA took a solid Ash figure and improved it, through in a ton of accessories (both new and reused), added in the amazing Evil Ed Getley figure, and released it for a really good price. The retail may be around $56 but you can get it for less than that which is incredible. You'e getting a ton of stuff here, all of which is fantastic (particularly that Necronomicon!) in this set. NECA does a fantastic job of getting you more bang for your buck than any other toy company and this shows. Great job, guys! Now, let's get some more Evil Dead stuff out! I need it!

I've reviewed a few Ash Williams before, though it's been awhile. I've reviewed the Cult Classics S-Mart Ash and the Evil Dead II Deadite Ash and Hero Ash.

This is the first figure of Ed Getley I've ever reviewed.

For more Evil Dead II figures from NECA, check out the following: