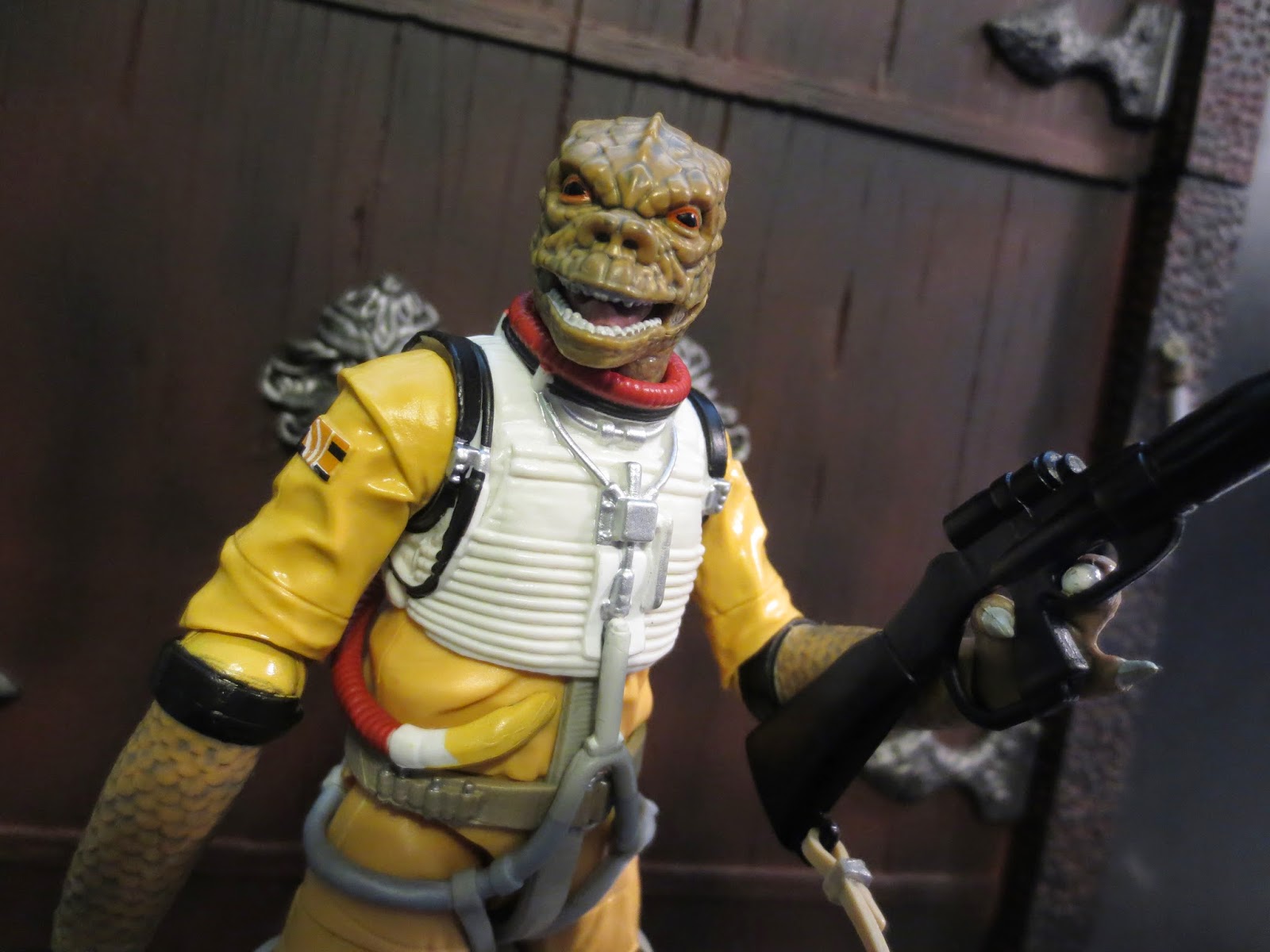 One of the best things about Star Wars is that even the most minor characters can evolve into fan favorites and take on an important role in the universe. Take Bossk: The guys appears for just a few seconds in The Empire Strikes Back and for even less time in Return of the Jedi and yet everyone knows who he is (of course now he has also had a fairly lengthy appearance in The Clone Wars to help continue the Bossk love). Bossk has had multiple action figures and statues based on his likeness which have often been some of the best action figures released in their respective lines. I still remember how impressed I was by the Power of the Force 2 Bossk from 1997 as he turned out to be one of the best Star Wars figures released in that line. Today, however, I'm looking at the newest version of Bossk from the 6 inch scaled The Black Series line. Bossk ships in a case along with Han Solo (Stormtrooper Disguise) and repacks of Chewbacca and the TIE Pilot and seems to be hitting store shelves in fairly decent numbers right now. Ready for a look at everyone's favorite Trandoshan bounty hunter? Then join me after the break... 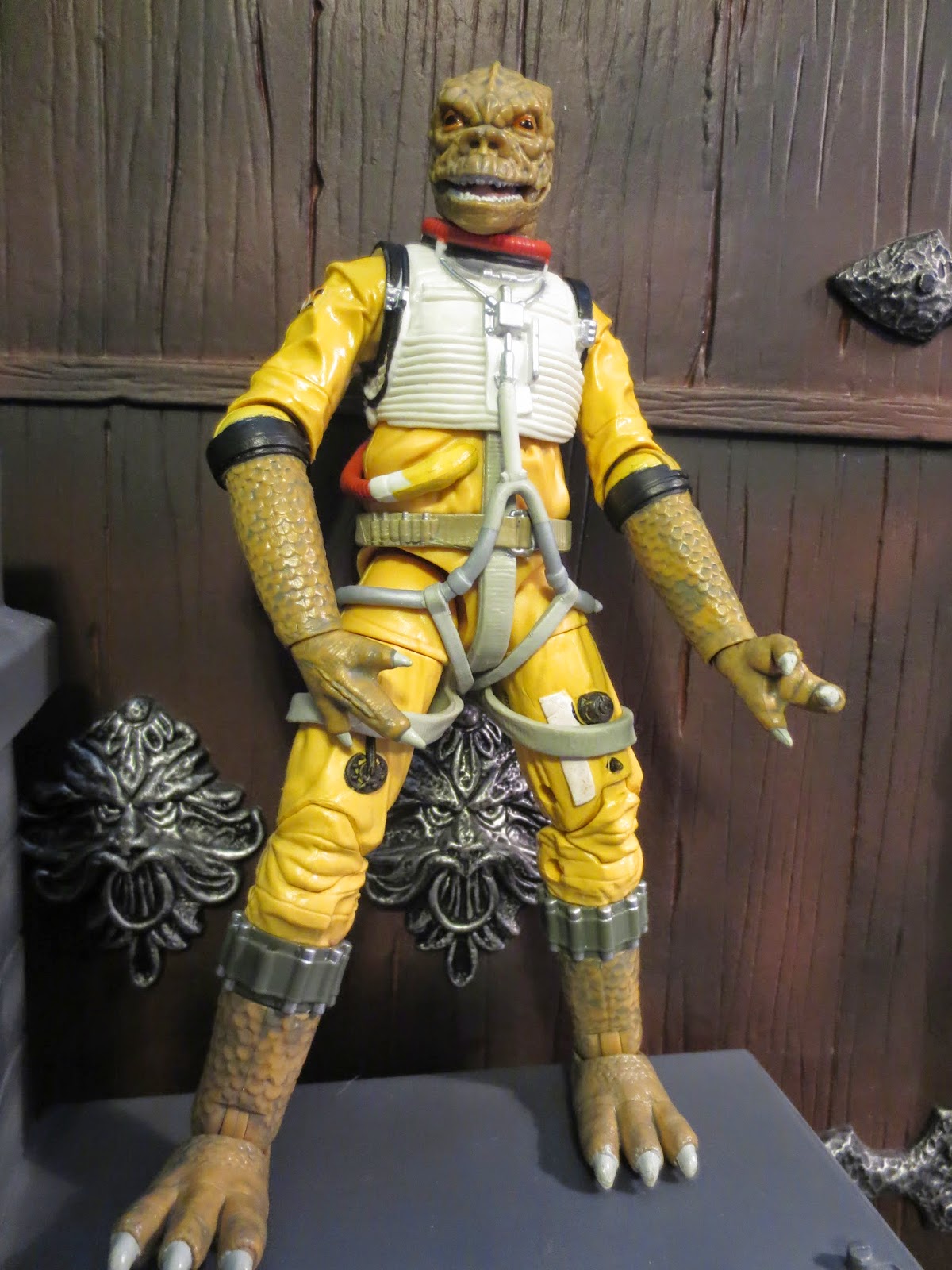 *For the most part, Star Wars Black figures can be lumped into three tiers. The top tier (best) are typically the armored characters, the bottom tier (worst) are typically the humans, and the middle tier are the alien characters. Bossk adheres to the established tiers pretty well as he's better than most of the human figures but not as slick as figures like the Stormtrooper or the Tie Pilot. He looks as realistic as basically any movie based figure from Marvel Legends or other similar lines and probably wouldn't look too out of place next to some NECA movie figures. He might look a bit short compared to a Predator or Alien, but I think the style would mesh well. I've heard a few folks complain about the proportions, but I don't think they're very noticeable in person. 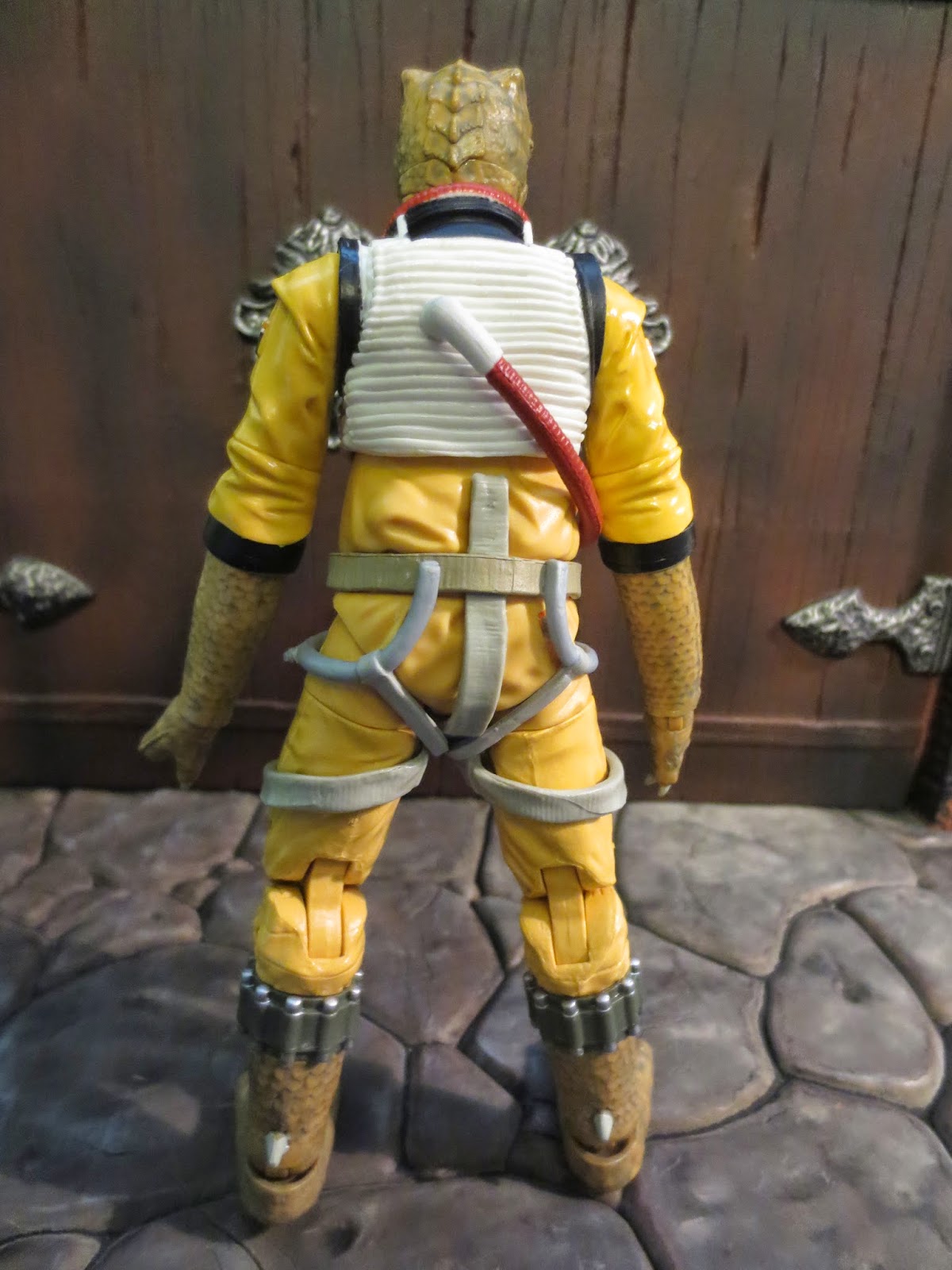 *There's a nice amount of detail on the sculpt and both Bossk's skin and his flight suit (in actuality a British Windak high-altitude suit that may or may not have appeared in an early Doctor Who episode) features all kinds of little bells and whistles. He's got appropriately reptilian (Trandoshan) skin, tons of straps and tubes all over his legs, and small bandoleers filled with projectiles on his shins. 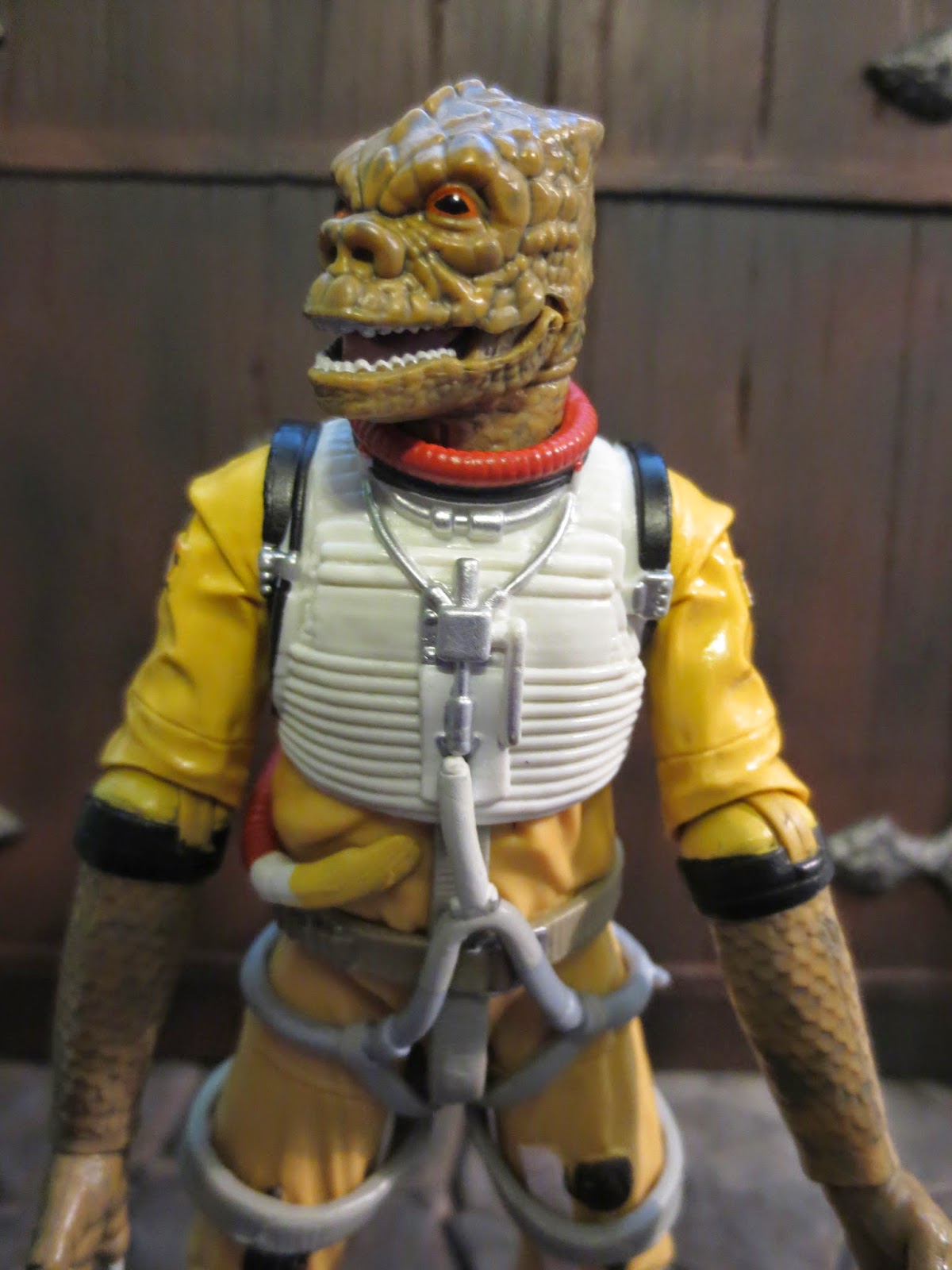 *I love the opening mouth! It really gives him some character and gives you some display options. I think it looks awesome and am happy Hasbro went with this feature. The paint is pretty nice on the head, too, and makes for a convincing portrait. 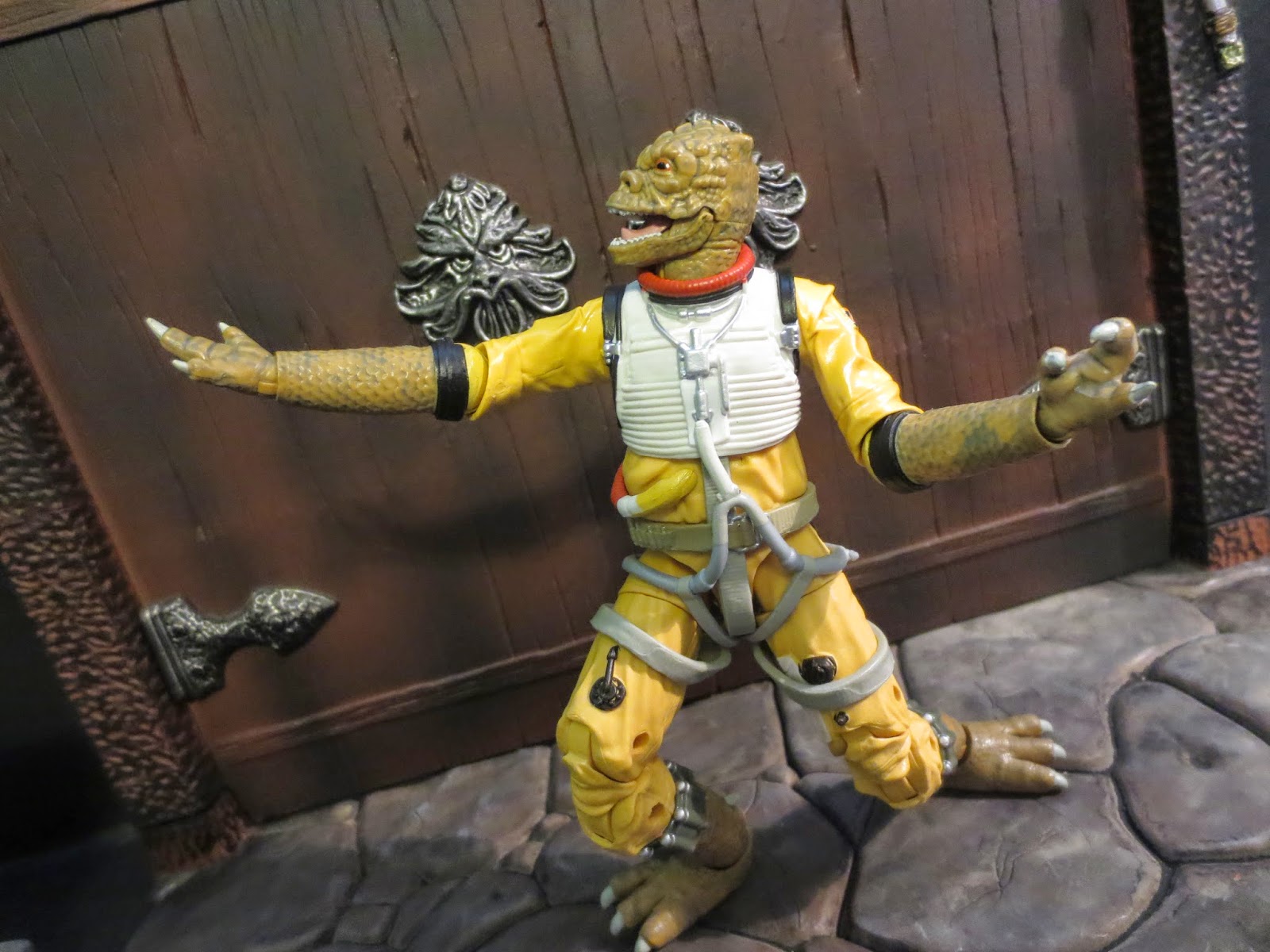 *Bossk, like most Star Wars Black figures, feels very sturdy. There are no brittle joint or rubbery plastic here to make playing around with this guy stressful. Hasbro has done a nice job in making these figures sturdy and durable. There aren't many collector focused lines that seem like they could handle playtime with kids these days but I think ol' Bossk here would do just fine. 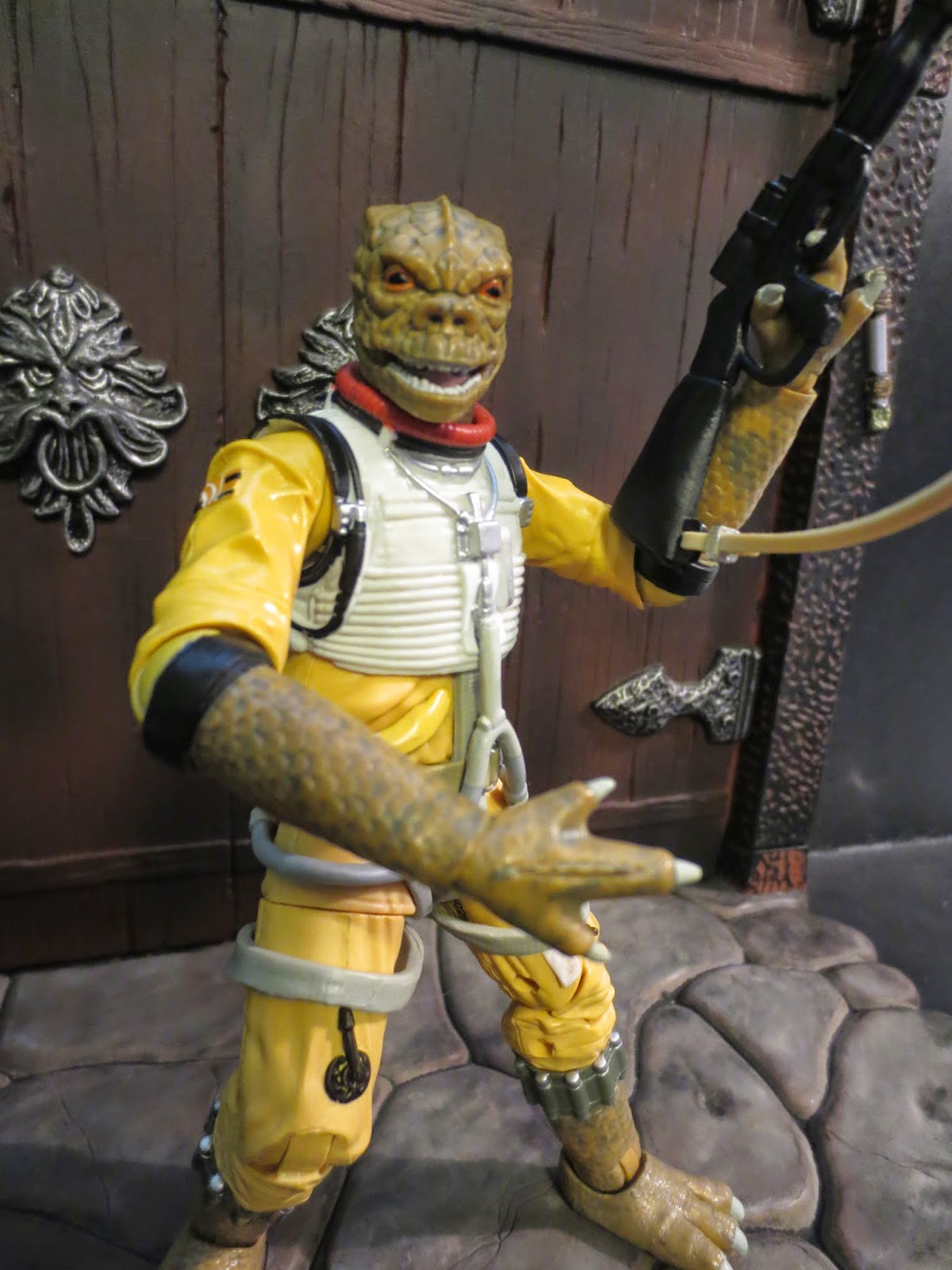 *Bossk has quite a few joints that work just fine but he's also hampered with quite a few that don't. he mid-torso join is so useless it might as well not be there. The swivel/hinged neck is hampered by the collar of his flight suit and takes a lot of force to get the pose you want. Also, his shin swivels are a bit loose. Bossk can stand just fine now but I have a bit of concern that in the future these joints might go from loose to floppy. Just be warned! 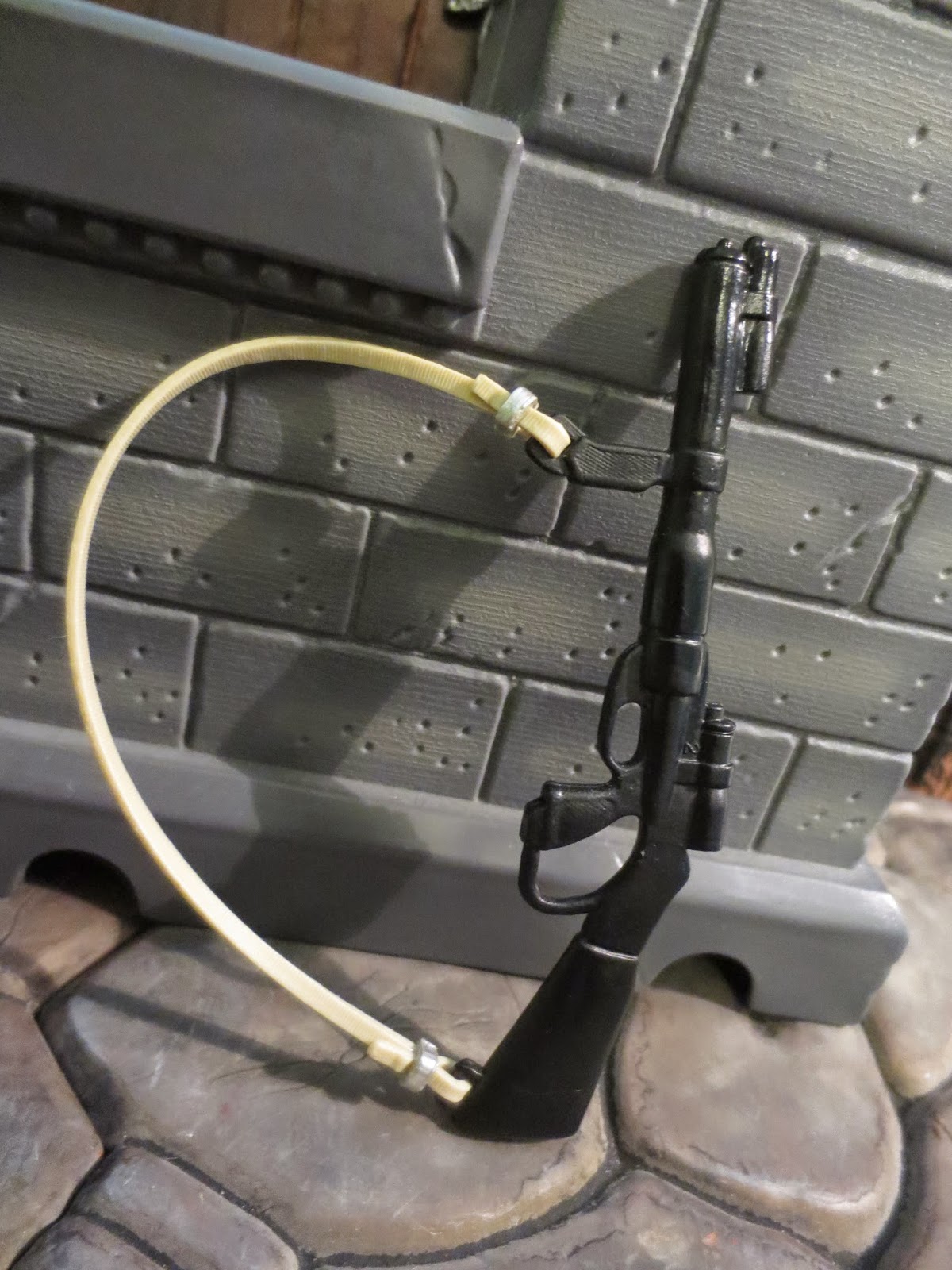 *I love the way the strap was handled on Bossk's Relby-v10 mortar gun but I'm not liking the rubbery plastic the actual weapon is molded in nor the lack of a paint application for the stock. Bossk's gun has a brown wooden stock and, since we've been getting some paint apps on weapons, I expected it would be here too. It's also frustrating getting him to hold it, but that's due not just to the rubbery gun but to Bossk's tiny hands. 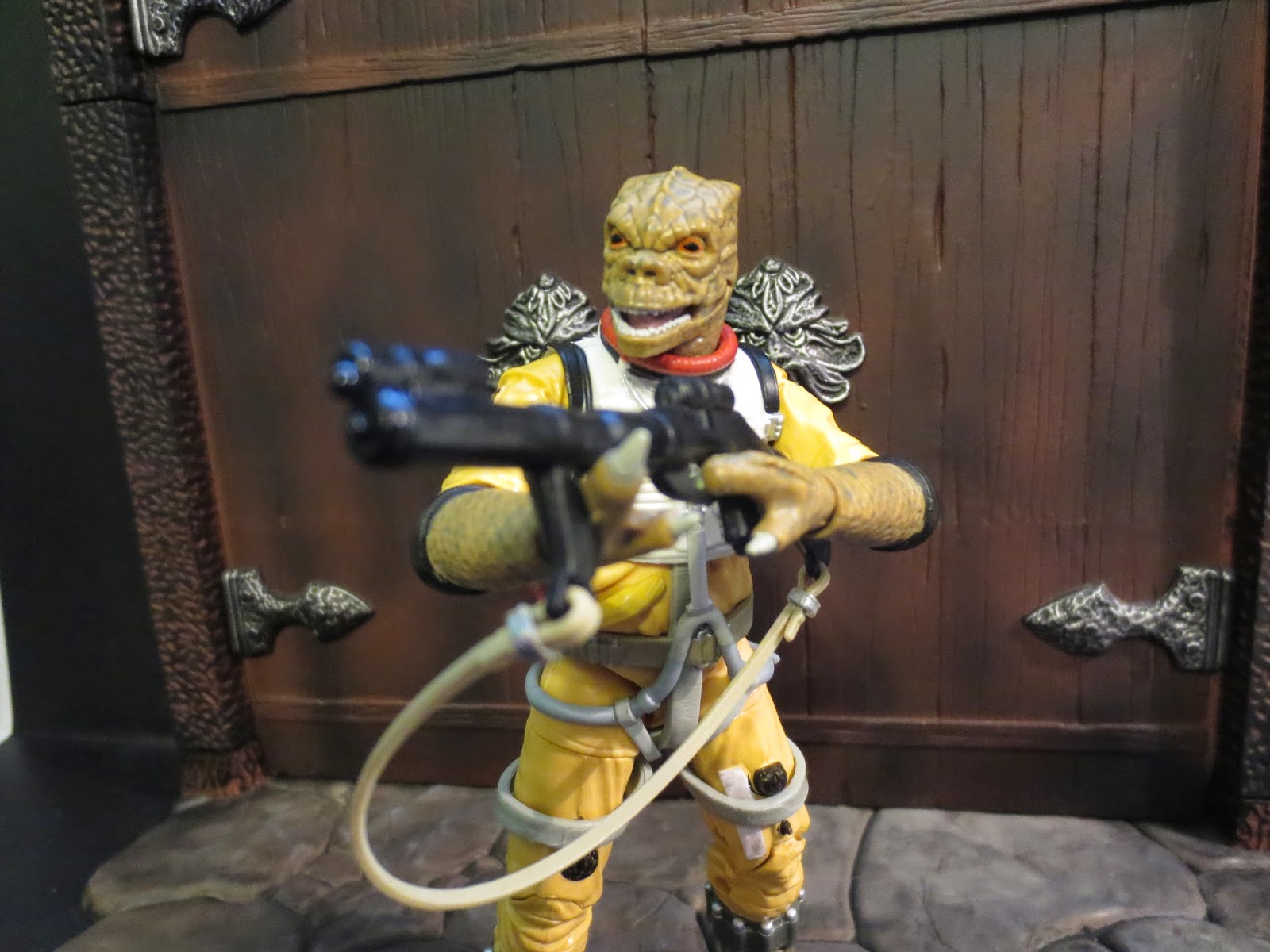 Bossk isn't a bad figure at all. I'd say he's definitely in the upperr half of Star Wars Black figures. His articulation feels a bit limiting and getting him to hold his awkward rifle is an exercise in frustration but he's still not a bad figure. Comparing him to other Star Wars Black figures and what's on the market, I'd give him a Great rating. He does have some really nice sculpting and paintwork that capture all the excellent details of his costume. His opening mouth, while not perfect, both looks awesome and makes me laugh. Seriously, I love to make him look like he's singing! Anyways, having Bossk in hand is great but it makes me wonder about what is next for these six inch figures. While the last year of figures (ever since the Anakin/ Clone Trooper series) have overall been pretty good, there still are a lot of pegwarmers like Obi-Wan, Slave Leia, and Bespin Luke that seem to be keeping many retailers from stocking or restocking the line. With the awkward way Hasbro has been treating the Star Wars property in general, the upcoming The Force Awakens line, and the mixture of success and failure this line seems to have had, I'm really curious as to what the future holds for the Black Series. We've seen some prototype pictures of the Episode VII figures but will Hasbro intentionally work to fill gaps in the former line? While it's been predominately Original Trilogy focused we hardly have any completed sets of characters yet, which makes displaying these toys a bit awkward. Anyways, here's for fingers crossed that Hasbro at least completes the main characters from A New Hope, gets 4-LOM, Zuckuss, Dengar to help us complete the bounty hunters (IG-88 is coming), and releases some version of Lando Calrissian and Admiral Ackbar.