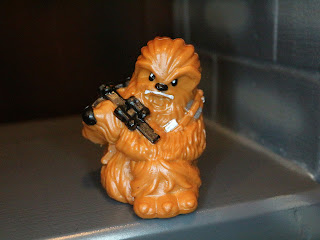 In my stocking this year I received a couple packs of the Star Wars: Micro Force figures. I reviewed quite a few of these earlier this year but after Series 1 they became kind of tough to find. I did find Series 2 once or twice but like most other Hasbro offerings lately, Series 1 seemed over ordered. Still, there are a few figures I was missing from Series 1 and Chewbacca was one of them. Guess what? I now have Chewbacca! Let's check out this miniature Wookie after the break! 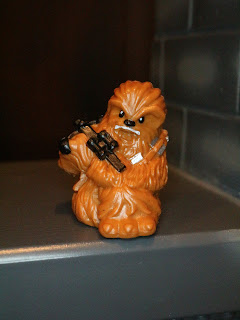 
* This is a pretty classic looking Chewie. He's furry, large, and wielding a bowcaster. Chewbacca appears to be another sculpt that was reused from the earlier Fighter Pods line but I never owned any of those so it's no big deal. I like the paint work on these as it's quite clean for figures about the size of Micro Machines microfigures. 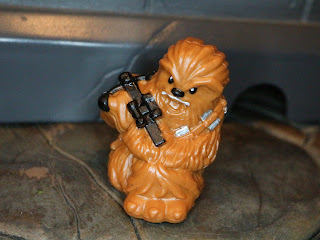 I really like these little guys. I do wish they weren't blind bagged, or at least came in sets where you could see most of the figures, so that's kind of kept me from going all in. Still, sometimes they're a cool way to get a microfigure and Star Wars fix. Chewie is a Great little micro version of nearly everyone's favorite Wookie (Wullffwarro does have a posse, for sure) and is a fun pull in the line.