The 12 Days of Christmas: Dracula Playset from McFarlane's Monsters by McFarlane Toys 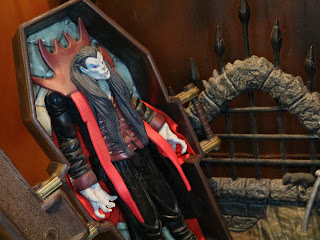 Back in the mid-late 1990s McFarlane Toys was one of the hottest companies around. McFarlane was synonymous with detailed sculpting, an unprecedented level of detail, and crazy designs and they helped to inspire other companies to up their games, too. In 1997 McFarlane Toys released the first four sets in their McFarlane's Monsters series, a series of miniature playsets with smaller sized action figures that evoked the Aurora model kits of the 1960s. I've reviewed a couple of these in the past as they've long been one of my favorite toylines. They just display so darn well that I've always made sure I've had space to display them in my collection. Today I'm checking out the Dracula Playset, one of the four series one playsets. I remember receiving this guy for my 14th birthday back in 1997 and I still love having him around. Let's check this guy out after the break... 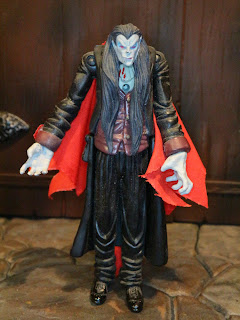 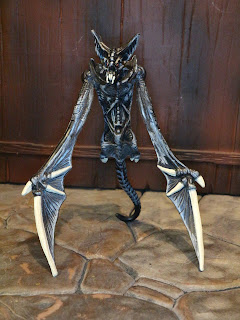 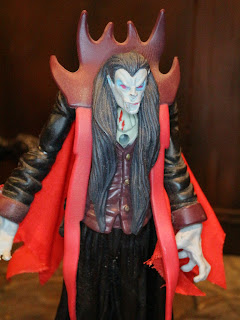 
* While this series gave us depictions of some of the classic movie and literary monsters, McFarlane still gave them a touch of style to make them feel a bit more unique. While Dracula is still a dapper dressed gentleman, his face is a bit more animalistic with long hair and pointy ears. His collar is a removable piece that helps to add a little but more of a dramatic feel to Dracula's appearance. 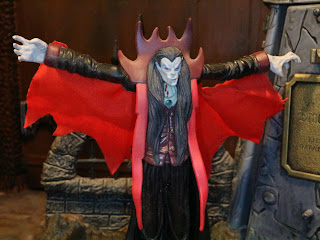 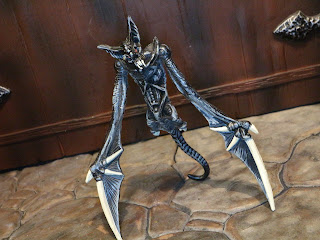 * Besides Count Dracula, the set also includes a demonic looking bat. Maybe this is Dracula in his bat form or maybe it's just one of Dracula's minions? Who knows? It's really creepy looking and features swivel/hinge shoulders as well. You can actually pose this thing as if it's walking on it's wings (which feature massive, sharp bones). 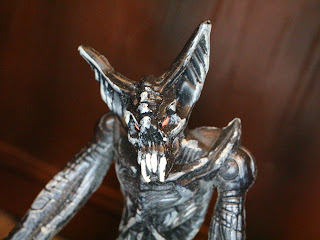 * The face on this guy is terrifying. He looks like something out of a nightmare, doesn't he? The paintwork is pretty cool with a drybrushed effect that brings him to horrific life. 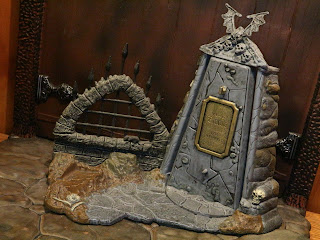 * The coolest part of this set is the insanely cool graveyard/ crypt playset. These playsets are what give these figures the ability to display so well and they showcase some of the best sculpting in the line. The playset features a bit of dirt, an old iron fence, and the entrance to Dracula's crypt. 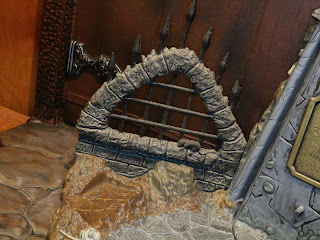 * The fence is pretty sweet. It's old with lots of weathering and some very pointy posts. There is also a rat crawling across the bottom of the fence. 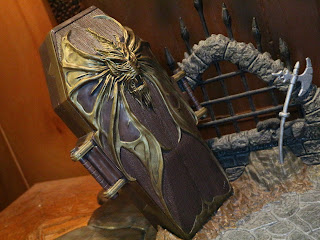 * The patch of dirt has a spot for Dracula's coffin, which is one of the coolest action figure coffins of them all. heck, it probably is the coolest. I love the creepy design on the front ad the excellent paintwork. 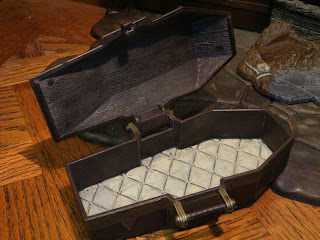 * Inside the coffin is padded to give Dracula a place to chill out and relax during the day. The top of the coffin also really looks like it's made of wood, showing off that infamous McFarlane detail we all used to know and love. 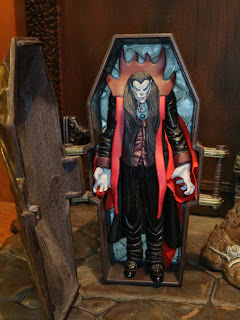 * Dracula fits right inside! Leave him open for display or close him up during the day to give whoever stumbles by a terrifying surprise! 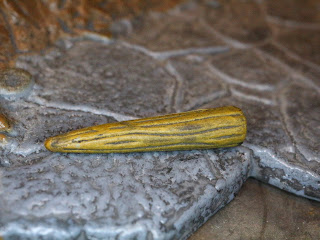 * I love that this playset comes with a stake. While there isn't a "hero" in this set, per say, I guess any of your G.I. Joe or classically scaled Star Wars figures can fill in for Van Helsing to hunt down and stake the count. 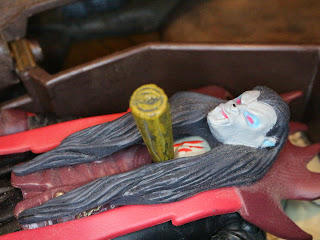 * There is actually a small hole in Dracula's chest so you can stick the stake in there. There's even a little bit of painted on blood splatter, too, for maximum effect. Brilliant! 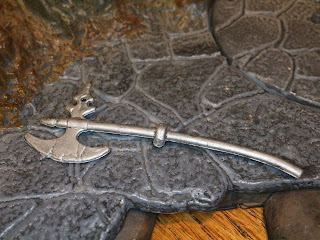 * There's also an ax included with the set. It's a cool design and possibly could be used to sever the vampire's head after he's staked. You know. Just to be sure. 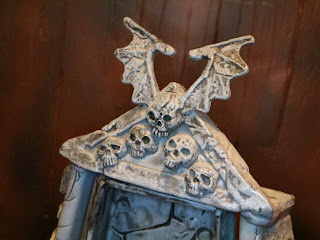 * The top of the entrance to the mausoleum or crypt features a really cool design with multiple skulls, including a pretty impressive winged skull. 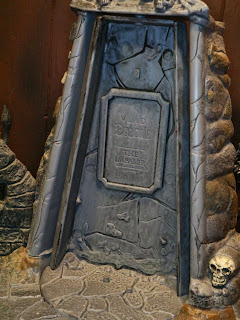 * The crypt entrance features a sculpted marker for "Vlad Dracula: The Impaler." It also has lots of cool detail that makes it look old and weathered. The atmosphere on these sets is just incredible. 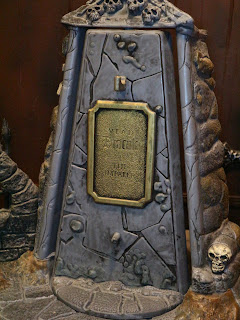 * So, one of the features of the set is that the crypt entrance spins around. The idea is that you can have Dracula change into his bat form. It doesn't work that well (I'll talk about that in a minute) but the effect is still cool and it gives you a couple of different display options. 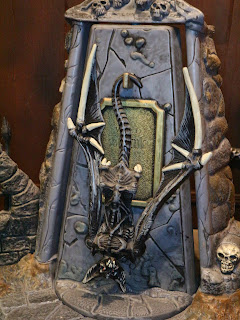 * This side of the mausoleum entrance also features a hook and peg so that the Bat can hang on it. 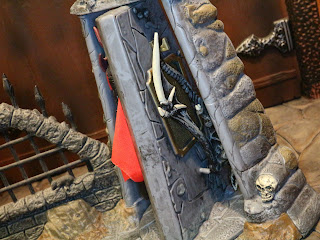 * Both Dracula and the Bat tend to get stuck inside the crypt when you're spinning it around. It's a cool idea but it definitely doesn't work that well. 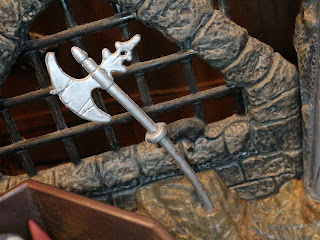 * Next to the fence is a small hole for storing the ax. I like little stuff like this although the ax does tend to wilt a bit over time. It's a bit too rubbery. 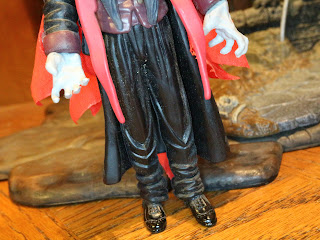 * Dracula's lower body has no articulation. None. Zilch. He's just a solid statue from the shoulders down. 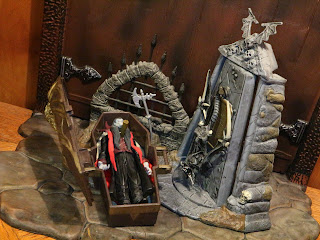 The Dracula Playset is still one of my favorites and I have a hard time giving it anything other than an Epic rating. It's easily one of my favorites in the McFarlane's Monsters series which, while only having eight playsets, is still one of my favorite toylines ever. In 2002 McFarlane took the McFarlane's Monsters name and began releasing regular sized figures that feature some of the most disturbing toys of all time (the Faces of Madness, Fairy Tales, and Oz lines). I'm not that into any of those but these playsets from series one and two still excite me and fuel my imagination to this day!

Do you get a kick out of Dracula? I've reviewed plenty of other Dracula and vampire figures including the vampire from the Playmobil two-pack 9307 and the Take Along Haunted House, Dracula from the Big Bucket of Monsters, and Dracula from Monster Fighters.

For more reviews from McFarlane's Monsters, check out the following:
The Mummy Playset
Werewolf Playset
Posted by Barbecue17 at 12/22/2018