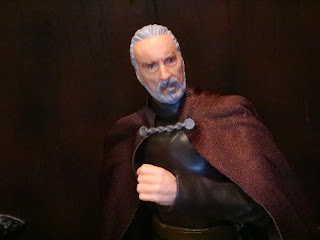 While my collecting focus has certainly narrowed to mostly focusing on Masters of the Universe I'm still collecting other stuff, including Star Wars: The Black Series. I haven't picked up every figure released over the past year but I'm certainly grabbing the ones that strike my fancy and Count Dooku is one I've been looking forward to for a very, very long time. It's still always a bit of a shock to me to think this line is as old as my daughter (she's now 6 and a 1/2 and the original Darth Maul figure arrived in the mail around the week she was born) and we're only now getting a major character like Count Dooku! A few months back I read Cavan Scott's Dooku: Jedi Lost and I was quite impressed with it. Count Dooku of Serenno is a fascinating character who was immensely intriguing in the films (thanks to the always mesmerizing performances of the late and beloved Christopher Lee) but who really has been explored and enhanced as a character in the various other media sources he has appeared in. Dooku has a long history of fantastic action figures and his first appearance in The Black Series is another winner. Let's check out Count Dooku after the break... 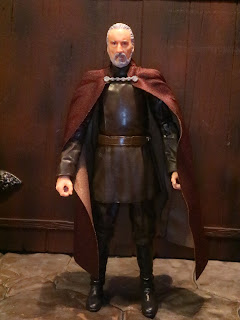 
* Count Dooku/ Darth Tyranus is a very striking character and Hasbro has captured that well. His outfit is very simple colorwise, with blacks and browns, but very regal, befitting Dooku's royal lineage. There are not a lot of extraneous details on Dooku's outfit but that makes sense: If you have the natural charisma and piercing stare of Christopher Lee, why do anything to draw your attention elsewhere? 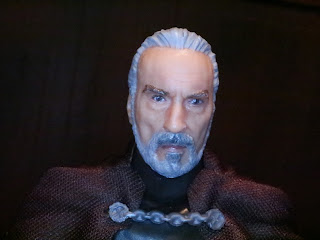 * The portrait is incredible and looks just like Count Dooku. The hair, bear, and eyes are excellent. I was just rearranging my Black Series collection earlier this week and, looking back, it really is amazing how drastically this line has improved over the past few years. Kudos to Hasbro for continuing to push the line forward. 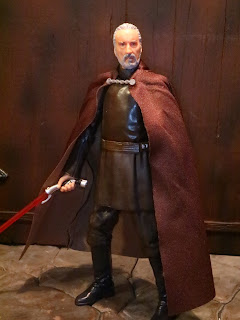 * Dooku's cape drapes very nicely over his shoulders and doesn't impede the articulation of the figure at all. It's made form a fairly nice material and it looks excellent on the figure. 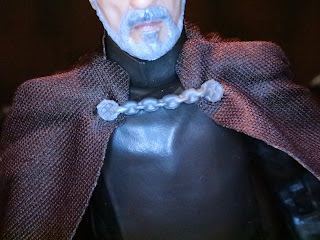 * Rather than Dooku's caper being a separate piece it is actually attached to the figure permanently via a "chain" that is attached to the front of the figure. It keeps the cape on securely and it is always in position. Since Dooku typically has his cape on, this solution works for me and improves the overall aesthetics of the figure. 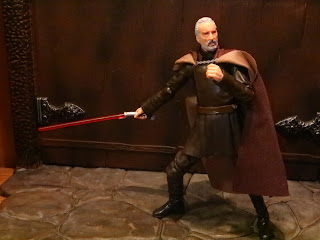 * Dooku's articulation is excellent, but that should come as no surprise if you've been collecting this line over the past year or two. Besides having all of the expected joints he also has a balljointed head and neck and the "buterfly" hinges, allowing for greater mobility and a better range of motion for lightsaber dueling poses. 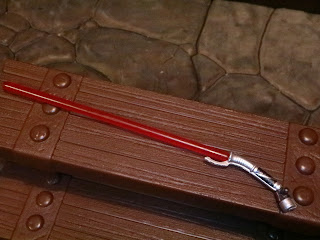 * Dooku's uniquely designed fencing lightsaber looks excellent. It features a removable blade, just like most other lightsabers in the line, and the handle is very nicely painted. Dooku can wield the blade very securely, too. 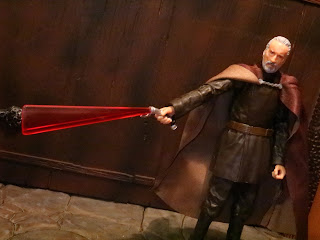 * Hasbro included a very interesting extra with this figure: A lightsaber blade that gives the illusion of movement. Yes, this is actually one separate piece that you can attach to the hilt of the lightsaber. It looks really cool, doesn't it? It makes me think of the cool Force Effects and energy blasts from the Star Wars: Attack of the Clones figures from 2002. 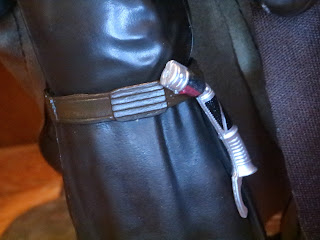 * Dooku's lightsaber gits perfectly into the hole on his belt, allowing him to tote his weapon around concealed below his cloak. 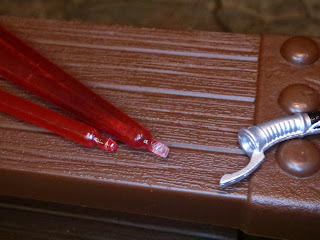 
* I'm still very, very nervous about switching out blades on these figures as the pegs for the lightsaber blade are so small! I really wish Hasbro would just give us an extra hilt rather than have to switch these things out. 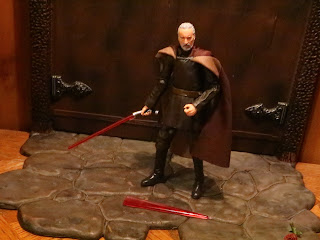 Thus far Count Dooku is the Star Wars: The Black Series figure of the year for me. I know there will be some competition, especially with all of the figures from The Empire Strikes Back coming out, but for now Dooku stands at the top of the heap as an Epic Sith who has long been needed in this line. While a Darth Sidious hologram or the Death Star plans hologram would have been welcome additions, the extra lightsaber blade is quite cool. With a fantastic sculpt and near-perfect articulation, this is easily one of the best Count Dooku figures Hasbro has ever released.


If you're a fan of Count Dooku/ Darth Tyranus then also check out my review of the Funko POP! Count Dooku #233.