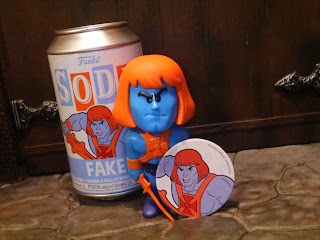 Since WonderCon 2020 postponed/ cancelled, Funko ended up doing their own virtual con and offered up their WonderCon exclusives on Funko Shop.com. I made sure to be there the day the exclusives went on sale (April 10th, I think) in order to pick up a flocked Eevee for my daughter and the two Masters of the Universe Vinyl SODA exclusives for me. Today I'm checking out the first WonderCon MOTU exclusive: Faker! With a run of 4,000 pieces (and no chase variant) these are a bit less common than the standard releases, though still more common than the chase variants. Faker is always a popular choice to be released early in any MOTU line since he's both a fairly popular character and a shameless repaint. Would you be up for some Faker soda? Then let's pop open a can and see how it tastes after the break... 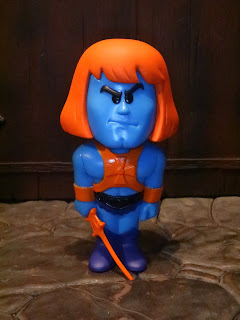 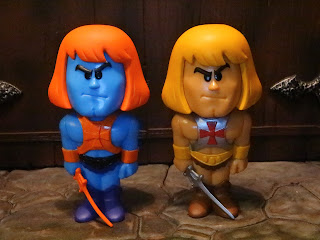 * Faker is a simple repaint of the standard He-Man Vinyl SODA release. Overall this works, although traditionally Faker always has Skeletor's armor rather than He-Man's harness. Since Funko clearly wanted a simple repaint, we got a rare occurrence of Faker wearing a He-Man styled harness. I actually really like it, though you could argue that it's incorrect. 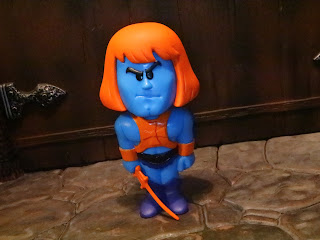 * The figures have a style of their own and are quite comical. They're not as stylized as most of Funko's other vinyl lines but the head is definitely a bit oversized. They're not articulated at all, either, but they do make for a cool display piece. They're too large to be considered minifigures, but their clean, colorful appearance does make them display well quite well. 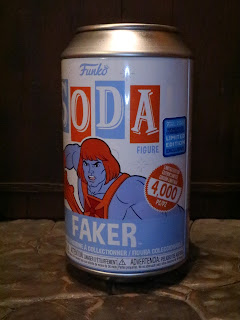 *  Consider me a fan of the cans these come in. The soda can design is actually pretty cool and makes for a rather unique display piece on a shelf. Faker soda? Probably either a blue raspberry flavor, or maybe it's a soda that tastes like orange, but it's colored blue. The front of the can shows off an image of Faker with all of the expected labels while the back shows off the figure and includes all of the legal info, etc. The top of the can separates so you could use the can to store trinkets as well, and it's even sculpted to look like the top of a soda can. It's made from a much more durable metal than your average soda can, too, so it's quite a nice collectible. 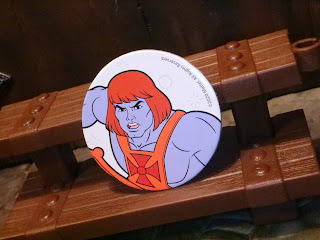 * Inside the can is a round, sturdy cardboard disc. On the front is Faker's picture while the back has the figure's name and the run amount listed (4,000). 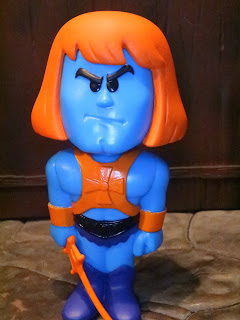 * I really like the style of these guys. Faker looks like he's standing at attention while decked out in his an orange version of He-Man's garb. The paintwork is really clean, as are the sculpt and style. It kind of reminds me of a 1960s cereal mascot! 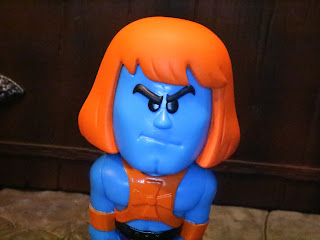 *Faker shares a portrait with He-Man, but I actually kind of like it better as Faker! I love the cocked eyebrows, questionable expression, and cleft chin. It's comical, but not overly silly. 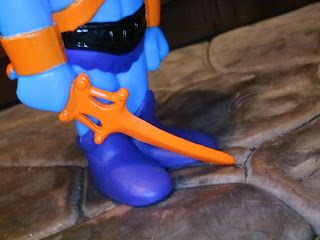 * Like He-Man, Faker's toting around a very nicely sculpted (faux) Power Sword in his right hand!

* Also like He-Man the (faux) Power Sword tip kind of rests on the ground, causing it to bend a bit. Be careful! 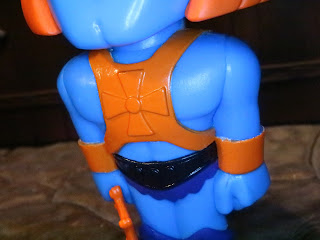 * I'm actually not upset with Funko reusing the He-Man figure to deliver a Faker wearing He-Man's armor. It looks pretty nice! What I don't like is that they didn't paint the cross on Faker's armor. It's painted on the front of the can, so why not paint it here? It seems like a QC oversight to me. 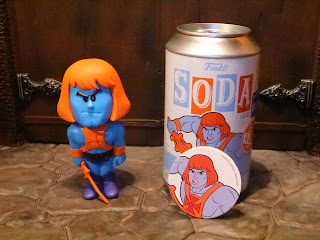 Faker is really quite fun and it's always nice to get another Faker for the toy shelf. I'm really enjoying this line and Faker is a nice exclusive/ repaint. He's a Good and a 1/2 stylized vinyl that's worth looking into. I'm really, really hoping that Funko is going to stick with this line for a bit and hopefully offer some new sculpts soon. I'd love to have a small army of MOTU heroes and villains in this style.

If Faker soda were a thing, what flavor do you think it would be? Share your best thoughts in the comments below!

Are you a fan of the man known as Faker? Then check out my other Faker reviews:  The Mondo exclusive Faker, the M.U.S.C.L.E. Faker from the Series 3 Pack C, the Ultimates He-Man (which came with a Filmation Faker head), the Faker figural bag clip, the Mega Construx Faker from the Battle for Eternia Collection and Faker from Battle Bones, the Masters of the WWE Universe Faker John Cena, the ReAction Faker and Leo Faker, and the VYNL Faker.

For more Vinyl SODA reviews, check out the following:
He-Man
Skeletor
Posted by Barbecue17 at 5/05/2020