Old School MOTU: Evil Lyn from Masters of the Universe by Tweeterhead 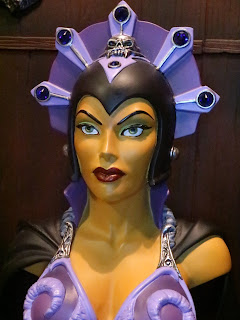 On Masters of the Universe Day 2020 I reviewed Tweeterhead's Teela bust from 2016 and, in the review, I mentioned that I was still looking for Evil-Lyn. Well, I found her! I stumbled across one online and struck as soon as I could! Evil-Lyn (for some reason just labeled as Evil Lyn without the hyphen on the packaging) has become one of the mos popular Evil Warriors and she seems to be a shoe-in for any Masters of the Universe line now, especially the high end lines. Tweeterhead released Evil-Lyn as the fourth bust in their series of MOTU busts and she is definitely another stunning addition to the collection. She's very much an amalgamation of the vintage toy and the Filmation design, so hopefully everyone is getting something they want here! As I was looking back at the promotional material for this piece it appears that Tweeterhead offered a limited run of 50 of these busts, each which included a certificate. Other places offered the standard release (I don't know the number) but so far as I can tell there is no actual difference between the exclusive and the standard busts other than the numbered certificate. Can anyone clarify that for me? Let's check out this bust of Evil-Lyn, perfectly suited for the shelves of your arcane library, after the break... 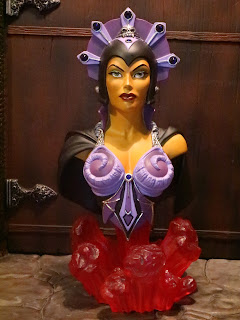 Pieces: Base, bust, and sword/shield piece. 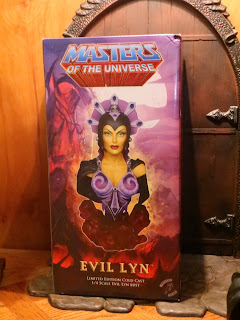 
* Here's a quick shot of the box. It does a great job of showing off an image of the bust and keeps it safe inside the package. The package doesn't use the Grayskull motif that so many other licensed items from this era used and instead features an image of Snake Mountain in the background, which is a nice touch. 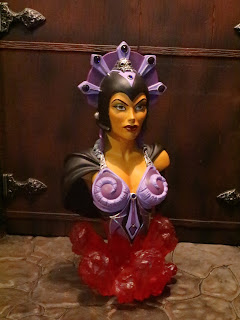 
* I really like the look of these busts. They're done in a style that really strives for realism. The bust itself attaches to the base (which is designed to mimic the exploding rocks from the vintage) via a strong magnet, so it's a little easier to move the piece if you need to shift things around or repack it at some point. These things look incredibly classy and there seems to be a very good sense of scale between characters in the line. 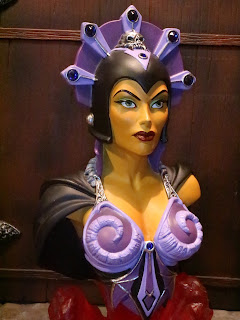 * As I mentioned in the intro, Tweeterhead's take on Evil-Lyn seesm to mesh the look of the vintage toy with the Filmation appearance, perhaps throwing in a bit of the more ornate costume of the 200x Evil-Lyn. She's bright yellow, just like the vintage toy, which really helps her to stand out. It's not quite "Simpsons" yellow and the variety of shades on her skin really helps it to look fantastic. It's a very nuanced paintjob. Of course, she's also sporting a outfit that sort of resembles Teela's (just like the vintage toy did) but it also has its own unique elements to it. 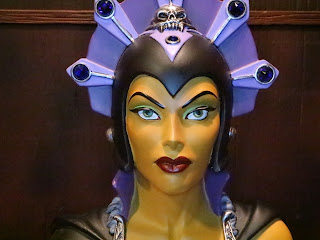 * The portrait is quite striking. I love the shape of Evil-Lyn's face and the work on her eyes. The green eye shadow really givers her a very sinister, very sultry appearance.  It's a perfect look for Evil-Lyn! 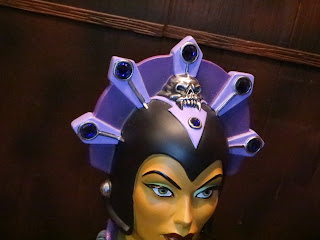 * Her headpiece is really nicely rendered as well and features six Swarovski crystals as well as a vaguely Grayskull like skull in the center. This is definitely a very Filmation inspired crest but it's even more detailed and elegant. 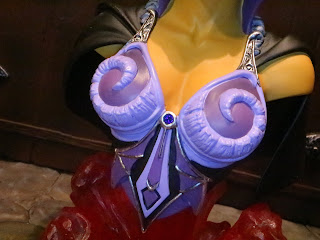 * I mentioned earlier that Evil-Lyn's armored cups match Teela's, which was true of the vintage toys as well, but the middle of her outfit is quite different. It also features a Swarovski crystal to give it a bit more zip. Her more detailed outfit definitely brings to mind Evil-Lyn's outfit from the 200x toyline and the MYP cartoon series, which is a good thing. That's one of her best looks! 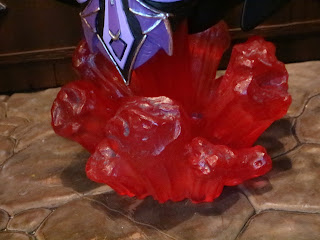 *  Like with Teela, I will admit that I'm a bit mixed on the red "exploding rocks" base. It is very dynamic and pays homage to the card backs of the vintage toyline but at the same time it feels just a little out of place here considering how the busts present the characters in kind of a neutral pose. It does keep Evil-Lyn standing upright, though, and it feels very solid. The translucent effect is cool and I imagine it would look pretty sweet with some LEDs behind it to cause it to glow. 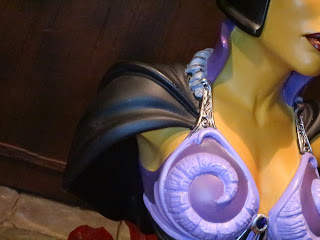 * I love the cape draped over Evil-Lyn's shoulders, It's actually a bit asymmetrical with the cape fully covering her right shoulder. It's a nice detail!

* Overall the bust is fantastic but on places with black paint, like the back of the cape and the helmet, there are one or two areas where the paint looks a bit odd. It's not scuffed, but I can't think of a better word for it. 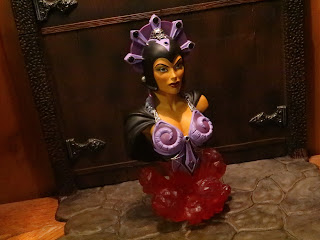 There have been a few companies offering some very nice, very high end MOTU pieces over the past couple years. Tweeterhead is certainly one of those companies and they've done a fantastic job with the product they've released. These 1/4th scale busts are quite nice and Evil-Lyn displays wonderfully on her own or displayed alongside the other busts in the series. She's wonderfully wicked and is a Great rendition of one of the most beloved (and feared) MOTU characters. I'm quite glad that Tweeterhead is going to continue the 1/5th scale MOTU statues that Sideshow was putting out as I imagine they'll do a great job with those too.


If you're a fan of Evil-Lyn I've also reviewed the M.U.S.C.L.E. Evil-Lyn from the Masters of the Universe green boxed set, the ReAction Evil-Lyn, Super7's neo-vintage Evil-Lyn, the Monogram International Evil-Lyn bag clip, the Evil-Lyn POP! Pez dispenser and the Mega Construx Evil-Lyn and Mega Construx Heroes Evil-Lyn.

For more Masters of the Universe offerings from Tweeterhead, check out the following:
Teela
Posted by Barbecue17 at 5/09/2020