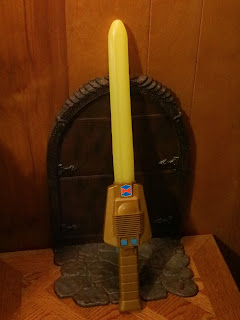 Did you like last week's Masters of the Universe Day review of He-Man from The New Adventures of He-Man line? Then how about we check out the Power Sword toy from that same line? Today I'm looking at the "He-Man" Power Sword (which was actually the name of the toyline, not New Adventures), a kid-sized electronic Power Sword. The New Adventures' version of the Power Sword definitely looks more like a lightsaber than a traditional sword, but oddly it doesn't resemble either the toy version or the cartoon of He-Man's Power Sword. Instead, it seems to be based on the Laser Power He-Man sword and the "He-Man" minicomic version or, more likely, the minicomic versionwas based on the toy. There were a few dress-up items and sets available for sale during the years of the original Masters of the Universe line but this was the first time a dedicated Power Sword was sold at retail like this. Let's check this one out after the break... 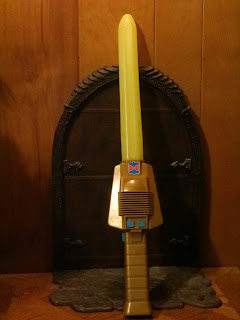 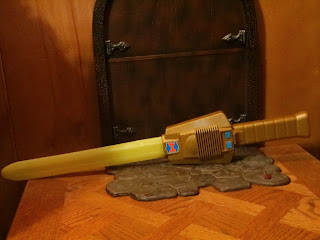 * Despite in no way resembling the classic Power Sword nor resembling the uniquely hilted Power Sword included with He-Man or seen on the Jetlag Productons cartoon series, the Power Sword is a fairly attractive toy sword, if perhaps a tad generic. The gold and yellow colors make it stand out from a lot of other swords, seeming futuristic rather than medieval. * The hilt is very solid and very durable. It has a nice grip along with two buttons and a trigger for activating the sound effects and lights. The 4 AA batteries fit inside of the handle and are kept in place by a battery cover that is attached to the hilt. That way you won't lose it!

* Both sides of the hilt feature a sticker of a red and blue stylized "H" logo. My initial reaction was to see this as similar to the Battle Armor He-Man logo but I actually think it's a further update of the Laser Power He-Man logo. 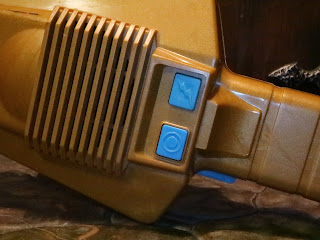 * This thing is really loud! Press the round power button to hear a power on sound. Press the lighting button to hear a series of "transformation" sounds including an extremely loud thunderclap fired by some odd energy noises. Lastly, press the trigger and you'll hear a laser blast effect. Swing the sword and you'll a "reflective" sound, like you're deflecting energy blasts. It's all very loud and fairly impressive for a toy from that time. I never had this one as a kid but I probably would have loved it if I had. 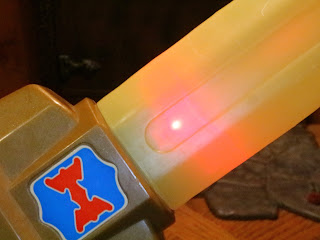 * The blade lights up, too. It's made from an opaque yellow plastic and there is a red light inside that flashes whenever the buttons are pressed or when you swing the blade. It's not crazy bright but it does look pretty slick in a dark room. 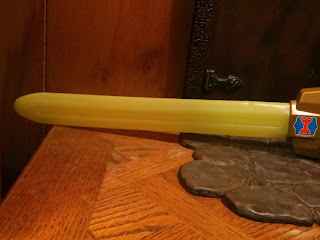 * My only real negative with this item is kind of a hypothetical: The blade would have likely broken quite easily if used by an actual child. As soon as I received this it made me remember my Peter Pan Battle Sword from Hook. I loved that thing but the blade broke off rather easily with just the least bit of swashbuckling. Be careful with this one, y'all! 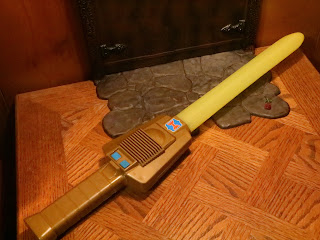 With the "He-Man" line Mattel definitely put out a solid effort but the fanbase just wasn't there for the endeavor. This is a Good and a 1/2 toy sword that has some fun sound effects though, once you've held one in hand, it's no surprise why many of the ones you find today have a broken blade. Give the toy's similarity in design to Laser Power He-Man's blade I wonder how long Mattel had this in development for. Were there ever any plans to release this in the vintage MOTU line? I'm curious to know! If you know more about this, let me know!

This is the first standalone Power Sword I've reviewed. For more reviews from the 1989 He-Man line check out the following:
Artilla/ Weaponstronic
He-Man