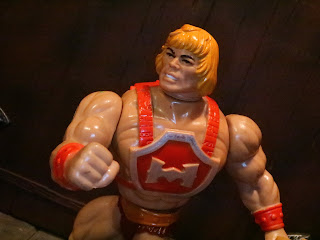 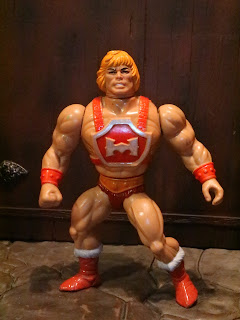 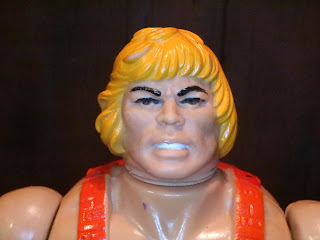 * He-Man has the same headsculpt as the original figure (so far as I can tell). It's classic, so what's not to like, right? Interestingly, the head is attached to a post that goes all the way through his torso to the waist, thus it is designed to not turn when you spin his torso back, keeping him looking forward. Very cool! 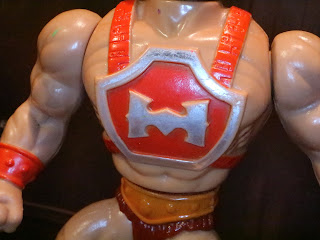 * Thunder Punch He-Man is wearing less armor than Battle Armor He-Man, but more than the original He-Man figure. His armor is pretty cool, though, with a vac-metal finish and the stylized "H" logo first used by Battle Armor He-Man. It really seems that Mattel wanted to make this a  well known logo for He-Man (Flying Fists He-Man would later use it, too) but I'm not sure that it really ever caught on as a recognizable "He-Man symbol" or anything. It sort of looks like a cross between an H and an M, doesn't it? 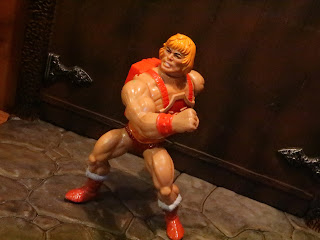 * Thunder Punch He-Man might use the same head as the original He-Man but everything else about him is new. His legs are even a bit different than the regular figure though the articulation is quite similar. The most unusual feature is that his torso spins around a central post that keeps his head facing forward while the torso turns.

* Interestingly, this version of He-Man has some nice paint upgrades. His bracers are painted now (they're bright red) and his boots have white paint for the furry collars. It's definitely a nice touch for this deluxe release. 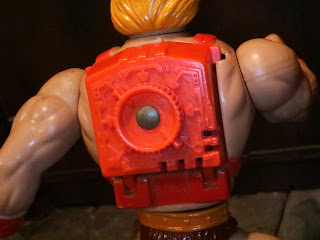 * So... this is Thunder Punch He-Man, huh? What brings the thunder you may ask? This backpack is part of it. It has a cool sci-fi inspired look to it (it's actually given to He-Man by the sorceress in the included minicomic) and it folds down to serve as a housing for the ring caps that He-Man uses to deliver some smoke and thunder! Yes, caps! Mattel's Masters of the Universe line was incredibly innovative so far as action features go and, so far as I can tell, this was the first action figure to use caps (a feature Kenner would later use in their RoboCop line and Hasbro in their C.O.P.S. 'n' Crooks line.


Here's a video of Thunder Punch He-Man in action! I don't usually do video reviews but this seemed like a special occasion and AKA Andrew Stokes asked me to do one to show off this action feature. You're welcome, Andrew! 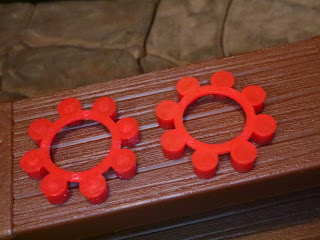 * The figure originally came with two rings caps but refill packs of caps (called Thunder Punch Ammo) were sold by Larami, the company who famously sold the Super Soaker in the early 1990s before they were acquired by Hasbro. I've always preferred ring caps versus roll caps as they're so much easier to position correctly. These aren't originals but instead are the ones I found at a Family Dollar. 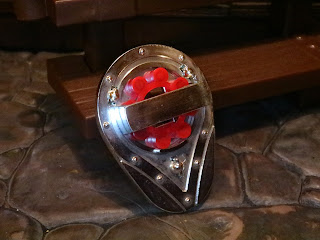 * Thunder Punch He-Man also comes with a new shield. It's completely different that the standard He-Man shield and features a vac-metallized surface, which means it's shiny! It also has a space for storing a ring of caps in the front. Many of the promotional materials and the packaging show He-Man storing his sword in the shield, too, but I don't think it really fits that well. Apparently there are two versions of the shield out there, gold and silver, so all you variant chasers got something else to look for! 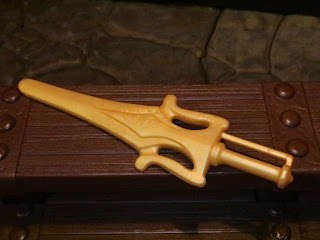 * Thunder Punch He-Man comes with the Power Sword, except this time it's cast in gold. Nice! This is really a nice looking Power Sword and might be my favorite Power Sword of the vintage line.


* Remember that if you purchased this figure new you would also get a minicomic: "The Treachery of Modulok!" 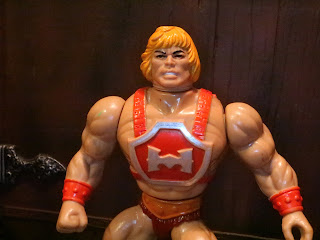 * He-Man's chest and arms look...really strange, don't they? His torso is much larger than the regular figure (making him taller than the other figures, too) and his muscles look really strange. Again, when you put action features directly into figures you often have the figures look really odd, and that's what happens here. He-Man really looks kind of off. I mean, look how those arms are positioned. Always use the Power of Grayskull in moderation, kids! 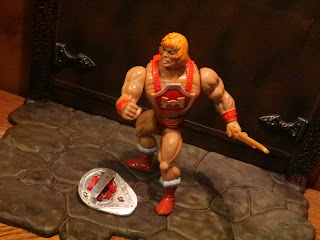 This guy is filled with power! Power! Masters Power! Hey, some guys got it and some guys don't, and Thunder Punch He-Man has definitely got it. While I don't like him as much as Battle Armor He-Man (my favorite of the vintage He-Man variants), Thunder Punch He-Man is still a really cool figure loaded with play features. The cap firing Thunder Punch is inspired and the accessories are quite cool. Yeah, He-Man's torso looks a bit weird, but when you're playing with him and having him knock Modulok's block off it's less of an issue. He's a Great and a 1/2 MOTU figure and a really nice example of Mattel's willingness to add innovative and just plain crazy play features to the vintage line.

For more reviews from Mattel's Masters of the Universe line check out the following: