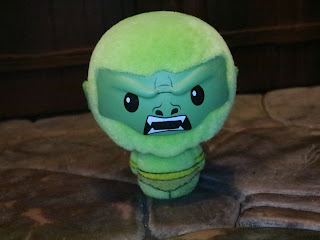 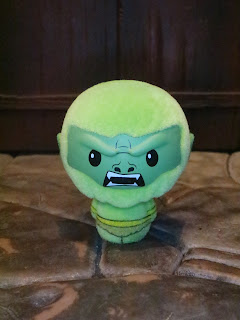 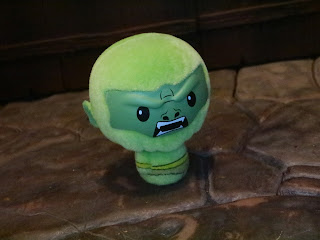 
* These guys are only an inch and a half tall and, like Dorbz, they have a fairly standard body with a sculpted head. Most of the detail is painted on here, and you can see that with Moss Man's bracers and trunks. 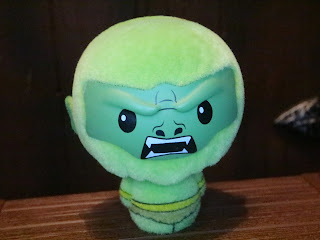 * I love Moss Man's headsculpt. It's very similar to Funko's other takes on the character and they definitely emphasize the teeth, the wide nose, and the brows. Moss Man actually has raised brows here, which help the face to stand out a bit more. 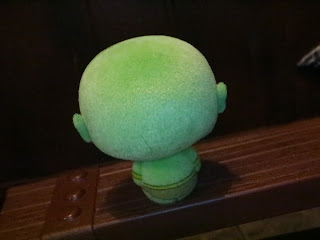 * Moss Man is flocked! The majority of Moss Man toys have been flocked and it's just one of those weird little things that always makes Moss Man more fun. This is a very smooth, even flocking, which is very different from the vintage toy, but it looks quite nice. It covers his whole body and most of his head, leaving only his face and ears exposed. 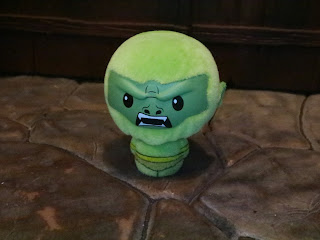 The Pint Size Heroes probably aren't going to be anyone's favorite Masters of the Universe toyline but they are cool little minifigures to display with the larger Funko pieces (almost like Russian nesting dolls!) and Moss Man was a nice addition to the line. He's not an A-list MOTU character so it's quite surprising how much attention Funko gave him. He's a Good and a 1/2 toy and another cool part of my Moss Man collection. I may get to one more Moss Man piece before Moss May is over. Which one do you think it will be?

Moss Man is one of my favorites and along with the vintage Moss Man I've also reviewed the M.U.S.C.L.E. Moss Man, Eternia Pine Deodorant, the MOTUC Moss Man, the Dorbz Moss Man and Beast Man 2-pack, the POP! Moss Man #568, the POP! + Pez Moss Man dispenser, the Masters of the Universe Minis Battle Armor Skeletor and Moss Man 2-pack, and the Mega Construx flocked Moss Man that came with the Battle Bones set and the standard Moss Man.

For more Pint Size Heroes: Masters of the Universe check out the following: