Moss May: Eternia Pine Deodorant from Master of the Universe Classics by Mattel 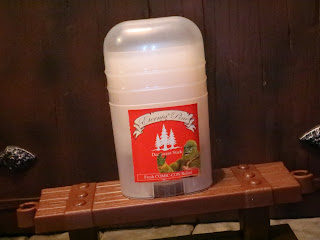 Back in the late 2000s and early 2010s Mattel owned SDCC! Not only did they have the hottest exclusives and the panels that generated the most excitement and press attention but they also had some of the coolest giveaways. In 2010 at SDCC they handed out something that it sounds like everyone there really needed: Eternia Pine Deodorant! Yes, this Masters of the Universe Classics promotional item is a small stick of deodorant with a Moss Man-ish smell to it and Moss Man's handsome mug emblazoned on the front. It was quite clever and really worked at the time, perhaps because of both the common assertion that conventions magnify body odor and the popularity of the Old Spice commercials and parodies. So yes, I've reviewed toothpaste, hummus, and hand soap, and now I'm reviewing deodorant. Moss Man deodorant. Truly Moss May is a wondrous month, right? Let's check out the ever so elegantly named Eternia Pine Deodorant after the break... 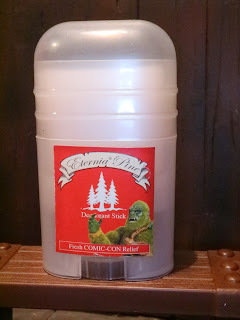 Articulation: Swivel wheel at bottom that causes deodorant to rise up 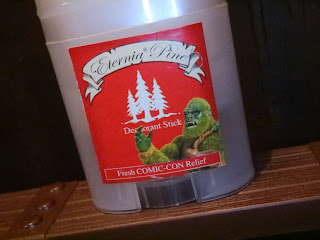 * The main reason anyone wanted one of these is because of the label. It's definitely an Old Spice parody! The banner reads "Eternia Pine" and it features three pine trees, an image of the MOTUC Moss Man figure, and the phrase" Fresh COMIC-CON Relief." It's quite humorous and it's just one of those odd little trinkets that is fun to have around in a collection. 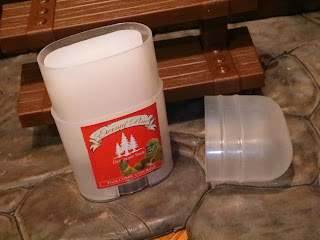 * In case you're wondering, yes, this is actual deodorant! It does have a pine-like scent to it and it really is working deodorant. It's a small container (30g), so I guess you could consider it travel size. 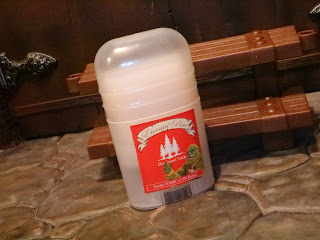 This was a simple giveaway item at SDCC 2010, a tchotchke if you will, but it really is a darn cool little item. Honestly, Mattel was really firing on all cylinders during the MOTUC years thanks to Scott "ToyGuru" Neitlich who was an expert at keeping people talking and hyped about the line. If you're a Moss Man fan and collector, odds are you'll want this piece for your collection. It's such a funny tribute to the Heroic Spy & Masters of Camouflage and I'm glad to have it. Mattel and Super7 have both utilized for a variety of little items (last year Mattel had a Moss Man air freshener). This is a Great little trinket and if you ever get to the point where you're hard up for deodorant then you've got a little emergency stash close at hand.


Moss Man is one of my favorites and along with the vintage Moss Man I've also reviewed the M.U.S.C.L.E. Moss Man, and the Mega Construx flocked Moss Man that came with the Battle Bones set and standard Moss Man.