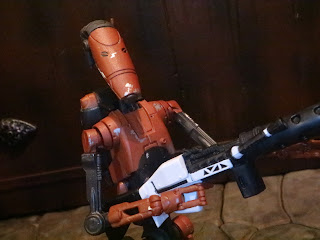 GameStop has recently done two things that have got collectors of Star Wars: The Black Series talking: Released two new video game based figures under the "Gaming Greats" banner and raised the price on all of their Star Wars figures to either $24.99 or $29.99. The Gaming Greats thing is good news, as there is a really cool Jedi Knight Revan and the Heavy Battle Droid, who I'm checking out today. The price jump, however, is not. GameStop actually went and repriced all of the Star Wars figures they had at $24.99 unless they're exclusives; those get the $29.99 price tag. Of course, if you preordered these you got the $24.99 price, and preordering them seems to be the only reliable way to have gotten them as most stores and online are currently sold out. I preordered mine and was told by my store that I got the only set that came in. Factor the preorder with the current 20% off bag sale GameStop had and my $5 February membership coupon and I ended up getting the two for between $35 and $40 bucks. That's not too bad at all! Anyways, let's talk about the Heavy Battle Droid from Star Wars: Battlefront II. These guys first appeared in 2001's RTS game Star Wars: Galactic Battlegrounds but later showed up in Star Wars: Battlefront II which is the label appearing on the box. Hasbro didn't release a Battle Droid in the Black Series until last year, so this is only the first repaint of this sculpt we've released. Is it a worthy variant? Let's find out after the break... 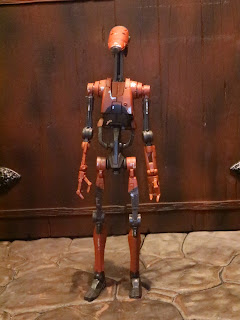 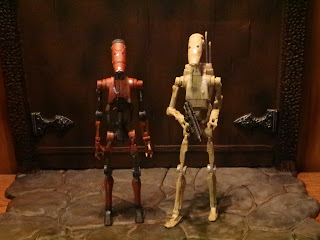 * On the left is the new Heavy Battle Droid while the standard Battle Droid is on the right. These two droids are exactly the same except for the paint applications and the inclusion of two additional blasters with the Heavy Battle Droid. Figure wise, this guy has all of the same great features as the original figure, although he does have the same limited hips as well. This is one of those reviews where it's mostly reused text with new pictures, just FYI. 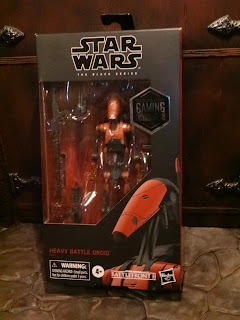 
* I don't usually show packaging from The Black Series but this one's a but unique as you've for the Gaming Greats sticker to the right of the window and the figure's name and background colors are reddish brown, just like the figure's paintjob. Jedi Knight Revan also has a uniquely colored box (his is purple). 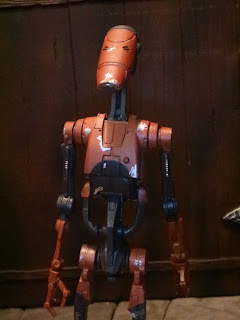 
* The Battle Droid was an excellent figure and the Heavy Battle Droid is the same, just with a different paintjob. The slightly metallic reddish-brown color scheme looks fantastic! The sculpt is still  excellent and does a great job of looking like the film design while also feeling like a sturdy, well made toy. The Heavy Battle Droid is a specialty unit from Battlefront II but, like the original, is covered with lots of paint scrapes and scuffs. 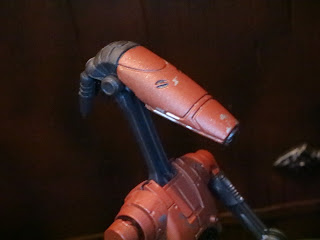 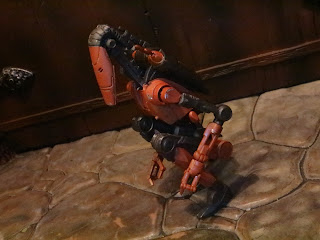 *  Looking at the figure, all of the joints you would expect to work do work. Also, there are probably a few joints here you might not expect. Perhaps the best thing that can be said is that the Battle Droid can be folded up into it's storage mode/ shutdown mode quite easily. It looks great and while we'll (probably) never get an MTT in the Black Series, this is still a very fun pose for the Battle Droid. 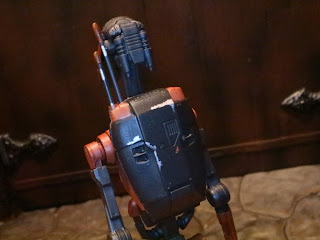 *  The Battle Droid features a removable backpack. Like the droid itself the backpack is slightly dinged and damaged with believable paint applications. 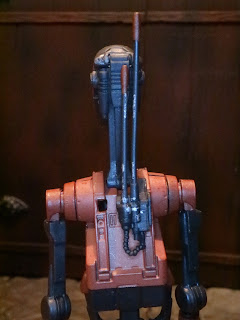 * Also like the original release, the Heavy Battle Droid also comes with an interchangeable Command Officer's antenna array. Remove the backpack and plug this piece in to give your Battle Droid a little variation. I'm sure Hasbro will continue to repaint this sculpt and I wouldn't turn down OOM-9, a red Geonosis Battle droid, or a Security Droid. I love the Security Droids! 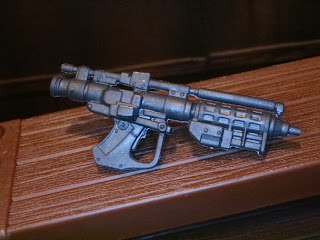 * The Heavy Battle Droid comes armed with three blasters, the first of which is the E-5 Blaster Rifle, also known as the Battle Droid blaster. This is an excellent sculpt that matches up nearly perfectly with the film prop. The hands are preposed so that the Battle Droid can hold it accurately, too. 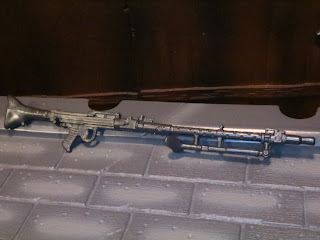 * Second up is the DLT-19 heavy blaster, a rifle we've seen many times in this line. It's an Original trilogy era blaster but since Battlefront II breaks trilogy barriers, this makes sense to include. 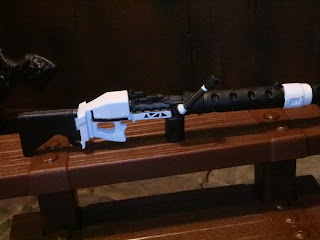 * Last up is the megablaster, also know as the Sonn-Blas FWMB-10. It's a massive rifle. with a a lever of some sort on the body that is articulated as well. Kind of cool. I will admit that it's quite difficult for the figure to hold though, but sadly the rifle doesn't come with the stand which the First Order Trooper that it originally came with included. 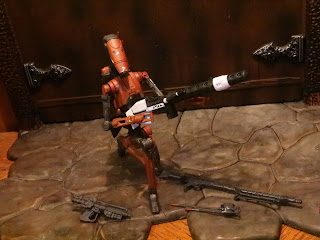 The Heavy Battle Droid might be a more expensive figure but it's still a very good figure. A Great and a 1/2 figure, even. The figure looks great with it's new paint scheme and the addition of multiple extra blasters does make this quite fun to play with. Hopefully these show up a bit more readily in GameStops so that folks wanting to army build them can. I don't like the new higher price on these, though. It seems like Hasbro is planning to raise the MSRP a bit (it hasn't changed since the line first came out in 2013) but they're definitely not raising it by $10 bucks.