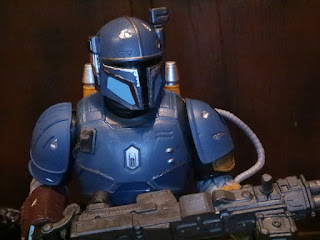 It's that time of the year again! Today I start my best of 2019 awards and I'll be starting with my primary category, My Top 10 Toylines of 2019. Creating my own "Top 10" lists is one of my favorite things to do every year on Acton Figure Barbecue and I always spend a lot of time preparing my list. This is the eight year in a row I've created a list (the earlier ones were originally at The Epic Review) and it's always interesting too see how the list changes, reflecting my changing interests. For the past few years I've actually felt like I had a difficult time finding 10 truly deserving lines, but this year I really had to whittle things down from a larger list of excellent candidates. I've made some changes to my collecting habits over the past couple of years and since I've really been focusing most of my collecting efforts on Masters of the Universe, you'll see a lot of stuff from that property on here. There were some real surprise lines this year, though, particularly a couple based on video games I don't even play but that had fantastic toylines. In fact, much of this list was comprised of new toylines.

As I always say, two key word for this list are "my" and "Favorite." I will readily admit that my list is not a best of list but a list of my favorites. One of my favorite end of the year awards events has been Michael Crawford's Poppies over at MWCToys.com as it's more of an Academy Award styled event with multiple judges from different areas voting on the best. Over here, though, well these are my picks and they're based on criteria that I alone set. Let's get this show rolling after the break....


Over the past couple of years I've divided my Top 10 into two separate categories: My Top 10 Toylines and My Top 10 Individual Releases. Today I'm starting with my top 10 Toylines as it's kind of my standard best of list. These are the 10 toylines (action figures, statues, minifigures, etc.) of the past year that I most enjoyed collecting. They may not always be the best, or the most expansive lines, but they're my favorites for one reason or another. As always, these are listed alphabetically rather than by merit And now, for My Top 10 Toylines of 2018...

* Funko's DC Primal Age had a rough roll out in 2018: The first series were timed Amazon exclusives with a high rate of breakage (other than the Batcave, which made last year's Top 10 individual toys list). In 2019 they were re-released (initially at Target) with a new production run and, fortunately, things turned around. This line was filled with fun toys combining the characters of DC Comics with the a Masters of the Universe styled barbarian/ fantasy toyline. While the line only lasted for two series (Funko seems unable to keep anything other than POP! vinyls going) they definitely filled a unique niche in my collection. The designs were imaginative and managed to get us a decent roster of heroes and villains along with a few steeds and a 100 page comic book. The shoddy early releases seemed to do a lot to harm the line's reputation and kept many collectors away, but who knows if Funko actually had plans to continue the line anyways? I really would have loved to have seen more characters released, particularly a few more females and more of DC's magical based characters. As it stands, these should still stand as a curiosity for DC collectors and fans of 5.5 inch barbarian/ fantasy action figures.

* If I were picking a toyline of the year, this might be it. Jazwares came out of nowhere and released one of the best 6-inch scaled toylines ever. With articulation to rival Marvel Legends, some wacky designs to rival TMNT, and a plethora of cool accessories to rival G.I. Joe, the Fortnite: Legendary Series delivers the best bang for your buck of any toyline I can think of in 2019. Swappable faceplates and/or heads, interchangeable backpacks, and lots and lots of guns made these some incredibly fun toys. The sculpts and paintwork are killer, too. I really think Jazwares could become a major contender in action figures with a line this good and I'm very anxious to see what they've got in store for Toy Fair 2020. Their 4 inch Fortnite figures were cool, but these larger scaled figures definitely live up to the Legendary name. The Fortnite: Legendary Series is incredible and even though I don't play the game, I want this line to go on and on and on! They definitely need more female figures, though, as Valkyrie was the lone woman in a line filled with men. There are so many cool characters to make, and so far Jazwares is giving them each the attention and detail they deserve.

* You can always count on NECA to deliver not only the best movie based figures out there but also to go back and deliver some "wish list" figures for properties you never expected anyone to cover. The Guillermo del Toro Signature collection was a huge hit for me.The first release was from 2018, so it didn't count here, but this year delivered three releases from Pan's Labyrinth and the Amphibian Man from The Shape of Water. I'm not sure if this line is intended to continue (I really want the ghost mother from Crimson Peak!) but it's nice to see NECA tackle some smaller properties like they did back in the Cult Classics days. Of course, their work is now far superior and these figures benefit from NECA's mastery of the craft. These are some gorgeous (and possibly terrifying) action figures and NECA gave the incredible designs the attention they deserved.

* I love Halloween (and Halloween) so the fact that NECA is back to actively making figures from the franchise really thrills me. While it seems like different companies have the licenses for different films, NECA's releases from Halloween II and Halloween 2018 were incredible this year. Plus, we finally got a Laurie Strode figure! The Halloween II Michael is my favorite of the bunch though, particularly due to the Ben Tramer mask alternate head. It seems like NECA has more plans for the line including Dr. Loomis and Laurie from Halloween 2 and the trick 'r treaters from Halloween 3: Season of the Witch. Of course, there's this year's upcoming Halloween Kills as well, so it shouldn't be a surprise if this line ends up on the best of 2020 again with all of the cool stuff surely on the way!


5. Masters of the Universe by Mondo

* I don't collect much in the 1/6th scale but I make an exception for Masters of the Universe. Mondo's MOTU line has been excellent so far and while there were only three true releases in 2019 (with some Mondo exclusive accessories and a DesignerCon exclusive Skeletor) all three releases were very, very good, offering up some bold new designs for Skeletor, He-Man, and Faker. If movie designs for the crew could look this good then a MOTU movie would surely be a smash hit! Mondo did a great job of blending together the classic designs with a more modern fantasy touch. The inclusion of Filmation characters like Berbie and Relay as animal companions just further set this line up as a must have purchase for MOTU fans.


6. Masters of the Universe by Super7

* Super7 released quite a few different Masters of the Universe lines this year and while I like the ReAction line and the He-Man and the Masters of the Universe line, my favorite of their 2019 lines was the neo-vintage MOTU line inspired by the Filmation animated series. Super7 really improved this line in 2019 and offered some characters never before done in the vintage style (like Shadow Weaver and Evil Seed) along with some fantastic Filmation based variant figures. It's always incredibly exciting when a beloved toyline that has been dormant for a long time gets new figures that fit in with it and many of Super7's vintage styled figures fit in with the classic MOTU line just fine.


7. Masters of the Universe: Mega Construx by Mattel


* Previously the Masters of the Universe Mega Construx figures were folded into the Mega Construx Heroes line, and two or so figures came out per year. In 2019 this line went into overdrive, however, with multiple releases and re-releases, vehicles, and a massive Castle Grayskull! Yeah, there were some flukes along the way (some difficult to find figures from a phantom series come to mind) but the line was quite consistent quality wise and nicely transitioned things to the present, where Mattel seems to have even bigger plans for 2020. These are some of the coolest minifigures on the market and feature amazing articulation for figures so small!

* While the line has had a bit of a name change, the Mythos line is still going and not only offered up a full second series to lovers of Lovecraft and minifigures alike, but it also offered up a mid-year mini expansion based on the Shadow Over Innsmouth and lots of figures in multiple colors (and even glow in the dark). This is a smaller line I really just love and I'm excited to see how it expands in 2020. Other writers of weird fiction might now be on the table, as HH Toys just released a two-pack based on the works of Edgar Allan Poe as well.

* Overwatch Ultimates is the best toyline this year that no one seemed to collect. What gives? These are well made action figures with cool accessories, beautiful and unique sculpts, a very diverse array of characters, and they're based on Overwatch, one of the most popular games out there. Why in the world did these seemingly fail so fast, causing stores to go on a frenzy to put these on clearance? Maybe there just isn't the kind of overlap between Overwatch players and action figure collectors, maybe folks didn't like the multiple repaints, or maybe there was some backlash due to Blizzard's controversial political stances this year? Sadly, one of the coolest lines of the year, with seemingly unlimited potential, seems to be dead in the water. Maybe Overwatch 2 will revive things?

* Star Wars: The Black Series has made the list every year since it was first released and it just keeps getting better. Regardless of whether or not you love the Sequel Trilogy, Hasbro is still cranking out lots of figures from the OT, the Prequels, and other media such as video games, shows, and even comics. Without any new films on the horizon and The 40th Anniversary of The Empire Strikes Back this year, let's hope Hasbro goes deeper into the characters selection and fills in some gaps from the previous years of the line.

Whew! That's that! What do you think? What were your favorite lines of 2019? Remember that I'll soon be releasing more best of lists including my top 10 favorite individual releases that weren't part of these toylines, so if you think I missed something it could still appear there. And now, it's time for some fun facts:

# of lines that have appeared on this list multiple years: 2 (That's a huge drop from last year!)

# of lines from Jazwares: 1

# of lines from Mattel: 1 (they own Mega Construx)

# of lines in which Batman appeared: 1

# of lines based on films from 2019: 1 (The Black Series had figures from The Rise of Skywalker)

# of toylines based on video games: 3 (The Black Series also had figures from Jedi: Fallen Order)

# of toylines that I never saw hide nor hair of at Wal-Mart: 6. ( More than last year!)

# of toylines based on R- rated films/M-Rated games, etc.: 2, although H.P. Lovecraft isn't really for kids....

# of toylines that were available through Kickstarter or an online subscription method: 0

# of toylines with no articulation: 1