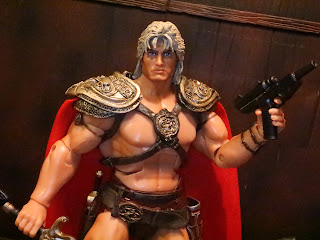 This might be the last new Masters of the Universe Classics figure I review. I know...it's bittersweet. While I really hope that the line will return some day (in name or in spirit) for now Super7's third and final series of figures are the last scheduled. Yes, we're still getting Snake Mountain later this year, but now that I've reviewed the rest of the movie figures (Dark Despot Skeletor, God Skeletor, and Commander Karg), Rebel Leader He-Man stands as the final figure in MOTUC, my favorite toyline of all time. How fitting that we end with a version of He-Man that many (most?) fans have wanted for years. While we've received multiple versions of He-Man and the movie based characters who appeared in the vintage toyline, we now finally have a movie based He-Man. Well, technically this is based on William Stout's designs for the film, so there are some minor differences. Still, though: This is movie He-Man and he turned out quite well. Let's check out Rebel Leader He-Man after the break... 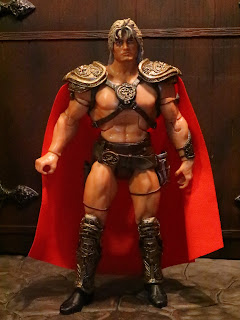 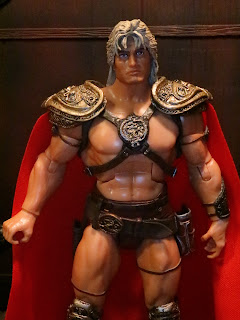 * Rebel Leader He-Man is, of course, donning the outfit that Dolph Lundgren wore in the 1987 film Masters of the Universe. While the details are different, the outfit largely captures the spirit of He-Man's classic look with a few new details. The shoulder pauldrons, armored greaves, and red cape definitely make He-Man seem a bit more "warrior" and a little less "barbarian," which I admit I like. Honestly, the movie portrayal of He-Man is one of my favorite depictions of the character. The figure is built on a fairly standard MOTUC body (He-Man is taller than usual) covered with armor. The armor isn't removable without damaging the figure, but it looks great and seems rather complex for being so scant. 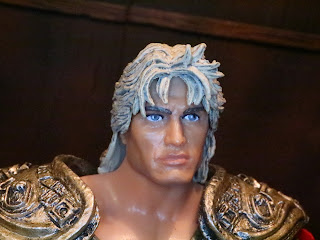 * Remember that these likenesses are based on William Stout's concept art and not the film or the actor's likenesses. That being said, I definitely think this is a pretty good "movie He-Man" likeness that does bear a good resemblance to Dolph without "being" Dolph. The hair is dead on, for sure. There is a second head included, but we'll get to that in a moment. 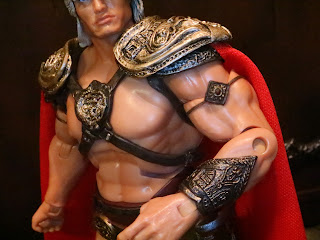 * Check out the detail on He-Man's armor. The bio details this armor as being forged by Granamyr and the metal masters of Lord Dactus and enchanted by both the Sorceress and the Goddess, so you should definitely except quality I would imagine. 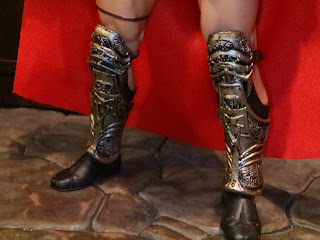 * The greaves are really cool, too. They're not quite the fizzy boots we're all so familiar with but the do protect He-Man's shins nicely. I always hated hitting my shin as a kid, so I would have loved to have some of these to go with my homemade He-Man costume as a kid. 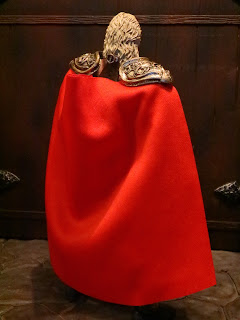 * He-Man's long, red cape always seemed super dramatic, especially during the scene where he watches the hologram of Skeletor menacing the free peoples of Eternia. Well, we finally have a He-Man figure with the cape and it's actually a soft good, something that is extraordinarily rare in Masters of the Universe Classics. Other than Slamurai, has anyone else had soft goods?  I can't remember off hand. 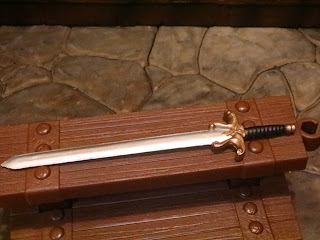 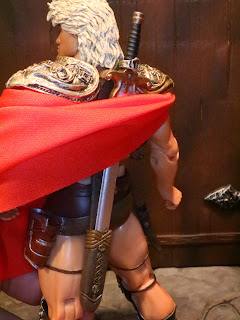 * There's also a sheathe for the sword on He-Man's back. The blade slips down into the bottom of the sheathe while the handle fits inside of the clip on the top. It stays firmly in place and looks fantastic. 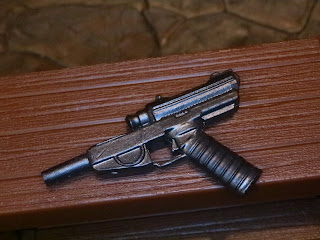 * I'm so glad He-Man comes with his pistol! The Mondo He-Man included this too, but it's great to have it in Classics scale. The rifle from one of Skeletor's troopers would have been cool, too, but I do own two of the Marlena/ Captain Glenn sets, so I could always use the rifle included with that figure, as it was based on the film prop. 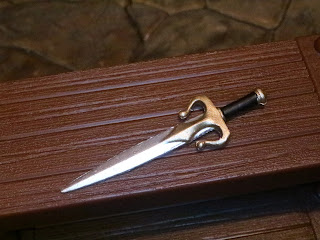 * I like He-Man's short sword/ long dagger. It actually looks like the classic Power Sword, doesn't it? 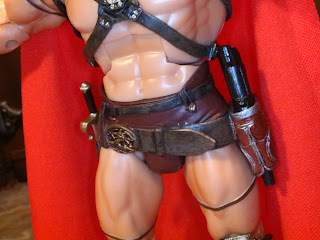 * He-Man's toting around a belt that has a sheathe for his dagger and a holster for his pistol. I love that he can carry all of his weapons! 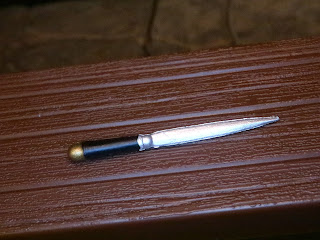 * Last up is this small boot dagger that He-Man chucks at one of Skeletor's troopers. It's one of my favorite parts of the film as it really depicts a very efficient He-Man who has been worn down by a long campaign. No more Mr. nice guy, right? 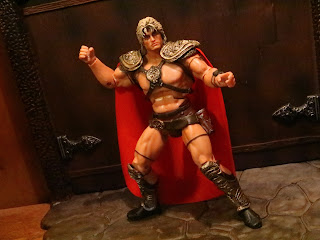 * The articulation is as solid as any other MOTUC figure with the added benefit of the swivel/hinge wrists and ankles that Super7 started using in the line. If you're at all familiar with this line, you'll know what to expect. the quality is fantastic, too. These really are an improvement over most previous Super7 releases. 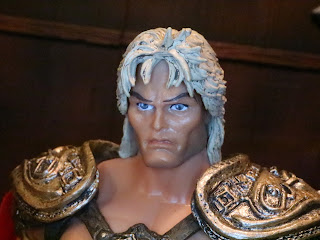 * So... this figure comes with two interchangeable portraits and this is the second one. I am not loving this one. I think the intention here is to capture the look of the MOTUC/ Laser Power He-Man with the hair of the Dolp Lundgren He-Man. It... just doesn't look as good as I would have hoped. Honestly, I would have rather had another copy of the Laser Power He-Man just for fun. 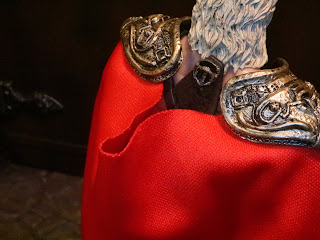 * The cape definitely has a fold in the middle in the film but this one seems too extreme. It looks kind of awkward, don't you think? I'm really not sure why the fold in the middle is so wide? Maybe if this were a larger item or a heavier fabric it would drape, but it just doesn't work that way here. 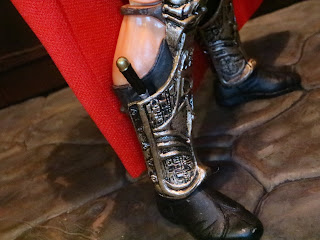 * I love that He-Man can actually store his dagger inside of his boot, but the dagger really just sits in here so loosely that it's just daring you to lose it! Seriously: Be careful! You could definitely just pick this guy up and inadvertently lose the dagger without even realizing it! 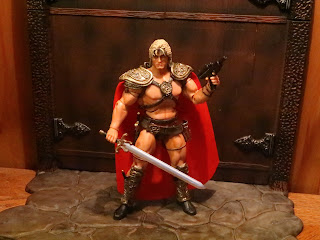 You know what? I really, really like this He-Man figure. He's one of the coolest figures to come out in MOTUC during it's impressive run of nearly 12 years so far. This is a dream figure for me and he turned out really, really well. He's well accessorized, has tremendous detail, and even gives you a few display options with the inclusion of the additional head. If this is the last new MOTUC figure I review on here, I think I'm content with saying "Good Journey" to this particular incarnation of Masters of the Universe by rendering this an Epic figure. 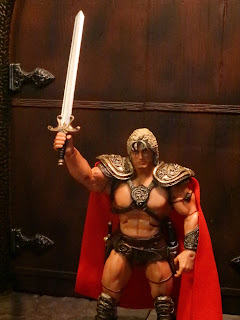