Action Figure Review: Stratos from He-Man and the Masters of the Universe by Super7 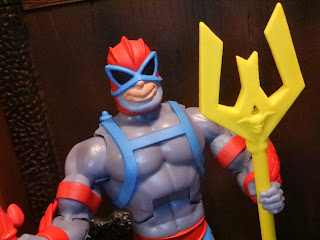 It's time for the last review from Super7's He-Man and the Masters of the Universe/ Club Grayskull line: Stratos! Stratos definitely was one of the most popular B-characters in He-Man and the Masters of the Universe, appearing in 15 episodes and, of course, He-Man and She-Ra: A Christmas Special. He definitely warrants a place in this line far more than Roboto (sorry Roboto!), so his presence here feels worthy of the last series of figures. He also looks quite different from the Masters of the Universe Classics Stratos figure, so that's another plus in his favor. I've never been the biggest Stratos fan but I've definitely been warming up to the character lately (I honestly just bought my first vintage Stratos figure at a toy show a few months back). Let's check out the last figure from the final wave of Super7's Club Grayskull figures after the break... 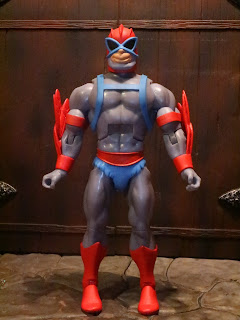 Accessories: 2 jetpacks, sword, and the Staff of Avion. 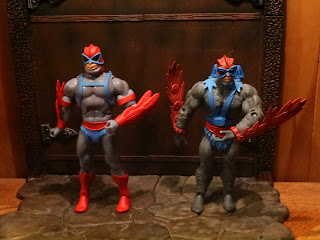 *On the left is Super7's Filmation inspired Stratos while Mattel's MOTUC Stratos is on the right. While they're both very clearly Stratos, these guys share no parts. The Filmation Stratos is smooth with a massive head, simple harness, and boots, while the MOTUC Stratos is hairy (he shares a body with Beast Man) with larger wings, a more complex harness, and no boots. 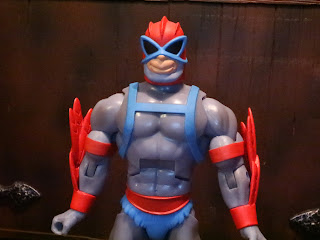 * While I've never liked most of the Filmation inspired Club Grayskull figures as well as their MOTUC counterparts, Stratos does a great job of capturing the Filmation aesthetic. He's bold, colorful, and looks like he walked out of the cartoon. His harness is a sculpted part of his torso, which is quite unique, and his belt and loincloth are smooth and simplified. 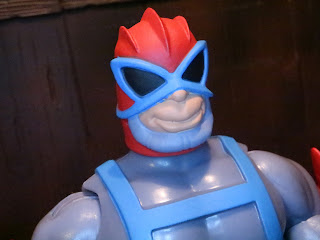 * At first I wasn't sure what to think about Stratos' kind of massive noggin, but after looking at more stills from the show to compare things, I think it's accurate. To my eyes, anyway. Stratos has a big head and rather exaggerated features which seem to be captured quite well here. Is it maybe a little oversized? Maybe. But Stratos looks kind of goofy on the cartoon, so it works. 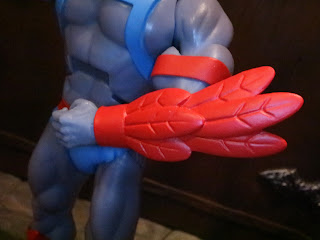 * Stratos' wings are separate piece permanently slid over his forearms. They do rotate freely, though, which is quite nice. They look pretty cool and match the simpler, animated aesthetic of the line. 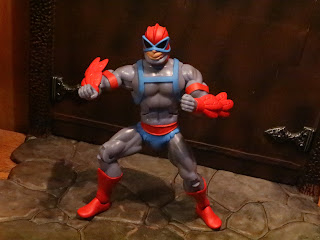 * Stratos has the same articulation as most other MOTUC and Club Grayskull figures that Super7 has released, so he moves quite well. He still feels solid, although he feels like he's made of a slightly harder plastic than some of the other figures in this series. Like, his torso feels a bit "hollow." It's not really a negative; just something I observed. 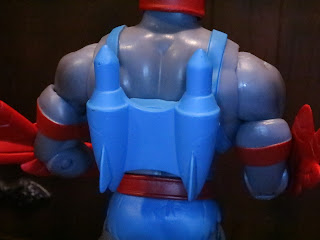 * Interestingly, Stratos comes with two jetpacks. Why two? Who knows? The first one, shown to the left, is much simpler and looks more like what you'd expect from the cartoon. It simply plugs into the molded on harness and stays on fairly well. 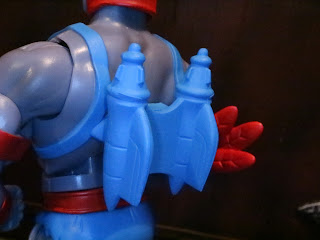 * The second jetpack looks a bit more like the vintage toy's jetpack. It's more detailed and I like it better. That's really all I have to say about the jetpack. 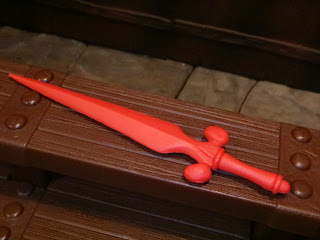 * Stratos comes with two weapons, the first of which is a red sword. This is actually the same sword that the Club Grayskull Teela included, just cast in red now. I don't remember Stratos using this sword at any point (I might be wrong!) but that's OK. It's always nice to see Stratos given some weapons! 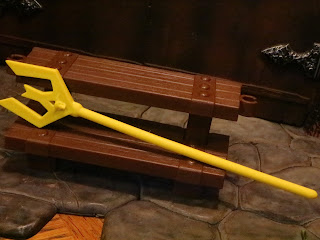 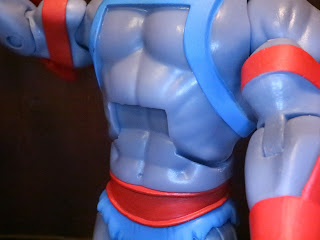 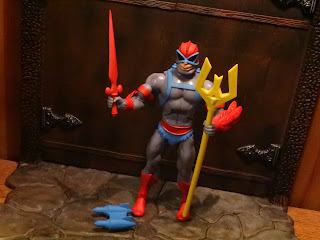 For a character who famously didn't come with any weapons in the vintage line, Super7 nicely loaded Stratos up with some goodies. He's got two jetpacks, a sword, and the Staff of Avion. Not a bad haul, really. He's not the best of the Filmation sculpts but he still is a very well done figure. I'd give him a Great rating and I'm not the biggest Stratos fan. He looks great with the rest of the Club Grayskull crew. It's sad that this line ended without Ram Man, someone who really looked very different in his Filmation appearances, but we did get a nice run of figures from Super7. Maybe someday Mattel will revisit this line again and fill in some gaps.


If you're a Stratos fan then check out my review of the M.U.S.C.L.E. green Stratos from series #2, the minifigure Stratos from the 200x Heroes Vs. Villains Gift Pack #1, the Mega Construx Heroes Stratos, and Super7's Neo-vintage Stratos.