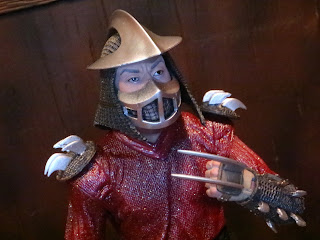 I don't review much Teenage Mutant Ninja Turtles stuff on Action Figure Barbecue these days and that's because I don't collect much TMNT stuff these days. When I first started writing reviews back at The Epic Review I was enjoying Playmates' line based on the 2012 TMNT series but when the quality of that line dropped off, my interest did, too. I've picked up a few TMNT items here and there but NECA's releases based on the 1990 film Teenage Mutant Ninja Turtles definitely captured my attention. Their quarter scale Raphael in Disguise is one of my favorite toys of all time and I would love to own all of the smaller 7 inch figures but, darn, they're hard to find. Thus far the movie based figures have been insanely expensive SDCC exclusives or GameStop exclusives which have been near impossible to get. The only two I own are the GameStop Donatello and Michelangelo. Now it seems distribution is getting better and I've been able to pick up the figures I wanted from the newest series. The Shredder was one of my most wanted figures and I was thrilled to find him at a GameStop last Saturday. Based on James Saito's portrayal of the character, this guy really manages to be terrifying despite having what seems like it would be a very non-frightening costume. I mean, a sparkly purple outfit with a shiny black and silver cape? Seriously, it sounds more like something a glam rocker would wear but Saito's presence and David McCharen's voice (Shredder was dubbed in the film, FYI) make the Shredder a truly menacing presence. While McCharen's voice isn't captured in action figure form, you're certainly going to hear it in your head when you look at this figure that so faithfully captures The Shredder. Let's take a look at The Shredder after the break... 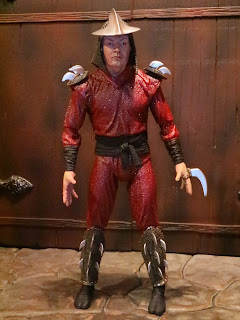 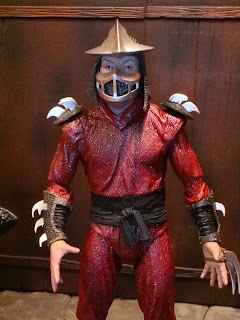 
* Looking at this figure just gets me really, really pumped. It's so incredible looking and is the perfect mixture of ninja master awesomeness and sparkly purple 90s extravagance. I love it. Seriously, Shredder looks perfect here. NECA shrunk down the sculpt from their Quarter Scale Shredder and it looks just as amazing. This guy is covered with detail. Interestingly, the upper part of the belt around his midsection is actually a permanently attached soft goods piece. 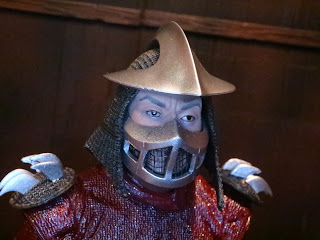 * Shredder's portrait is amazing, particularly with the mask on. The mask is removable, but I'll get to that in a minute. For now admire the detail of the Shredder's helmet. it's sharp, shiny, and his mask even has a mesh like material covering his lower face. 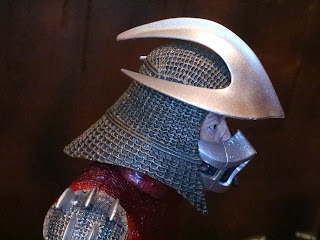 * The chain mail-like texture on the side and the overall shape of the helmet is so incredible, I gotta show it off too. 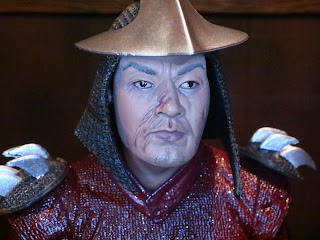 * Remove the mask and you can see Oroku Saki's scarred visage. This looks awesome. Maybe it doesn't look "perfectly" like James Saito in the film (this guy looks a good decade or so older) but darn, is that an awesome looking headsculpt or what? Seriously, this is Oroku Saki. Those scars look awesome and wicked and I love it! 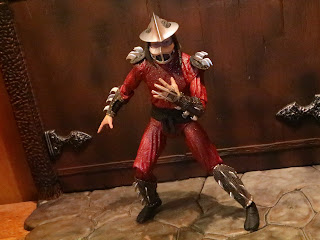 * The Shredder is quite we articulated. We're not talking Marvel Legends level or anything but he definitely moves quite well with lots of joints. Most importantly, most joints, but particularly the head, neck, and waist, have great ranges of motion that allow for some very expressive poses. 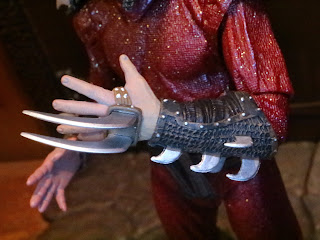 * Shredder's hands are removable (more on that in a minute) but so are the the blades on his forearms. They look really cool and the paintwork just makes them pop. Seriously, I love the level of detail on these. Brilliant work. 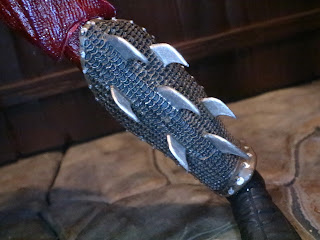 * Shredder's leg blades are incredible, too. 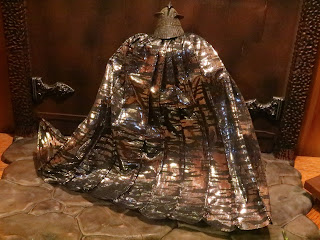 * The Shredder comes with his cape which is a very memorable part of his movie costume. It's massive, very shiny and gaudy, and has a fastening metal clasp. Looking at the best stills I can find, I'm really convinced that NECA did an excellent job in recreating the Shredder's cape which is just a truly unusual design that few villains could pull off well. There's also posing wires in the cape, allowing for better poses and helping the cape to drape properly over the figure's shoulders. 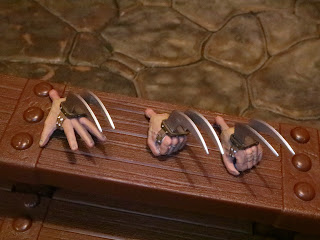 * The Shredder comes with three hands with blades on them. They swap out easily and you get three different hands: An open hand, a fist, and a standard grip. 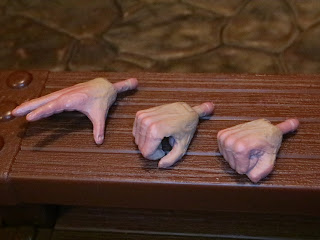 * He also gets regular right hands in the same poses: An open palm, a grip, and a fist. 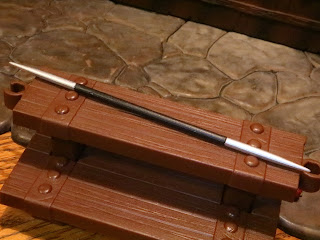 * During the rooftop battle against the turtles, Shredder uses his yari, a doubled tipped spear like weapon. It's a very simple accessory but the paint makes it convincing enough to go well with the rest of the figure. 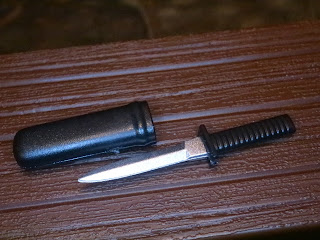 * He also includes this small knife with a functioning sheathe. 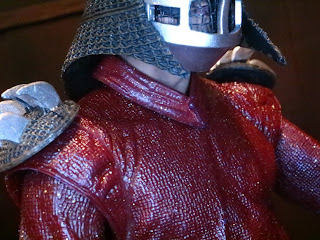 * Shredder has both a balljointed neck and a balljointed head. The balljointed neck is covered by his collar, which isn't a problem except for the fact that the collar tends to rotate around when you're moving and posing the figure. You'll have to spend a good bit of time adjusting it back in place. 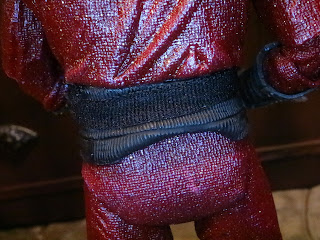 * On my figure, the back of Shredder's rubber belt is warped. The belt can "unfold" but it's so bent that it kind of curls back into this messed up position. 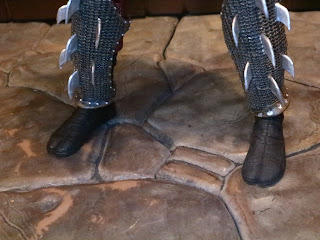 * I'm not sure if something is attached wrong or if it's just the way the articulation is designed but Shredder's left ankle is a pain to get into position. It looks really off sometimes and takes a ton of futzing with to make it look decent. 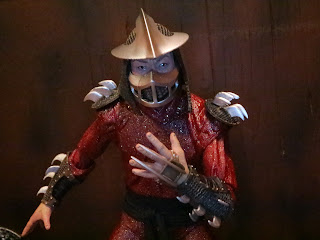 The Shredder might have a few flaws but I still think he's one of the finest figures I've seen lately. He looks perfect and the additional details like the removable mask, extra hands, and the impressive cape make him even cooler. I mean, who thought that thirty years after the release of Teenage Mutant Ninja Turtles we'd be getting the definitive action figure of the film's villain. What a crazy time we live in, huh folks? This guy is Epic. He's a GameStop exclusive, so check your nearest store to pick him up. I've seen him a few times so he seems to be in better supply than the turtles were.

For more figures from NECA's TMNT line check out the following:
Raphael in Disguise (Quarter Scale)
Posted by Barbecue17 at 2/27/2020