Action Figure Review: Mer-Man (Mondo Exclusive) from Masters of the Universe by Mondo 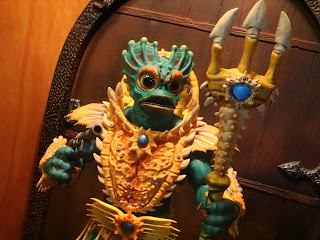 Last week Mondo sent out another figure from their series of 1/6th scale Masters of the Universe figures and this time it's the ocean warlord Mer-Man! Mer-Man is one of the original Evil Warriors from the vintage line and here he makes the fourth villain in the series. Yup, the fourth villain. Poor He-Man is woefully outnumbered so far! Then again, he's He-Man, so you know he's got this. This Mer-Man looks pretty serious, though. I really like Mondo's subtle redesigns of the MOTU crew in this line as they look fantastic and really seem like something you would see in an incredible MOTU movie adaptation. Mer-Man might just be the most impressive figure in the line yet and the Mondo exclusive figure is even better since he comes with not two but three interchangeable heads and a spear containing the Crimson Pearl. Amazing stuff, right? Let's check out Mer-Man after the break and see how cool he is! 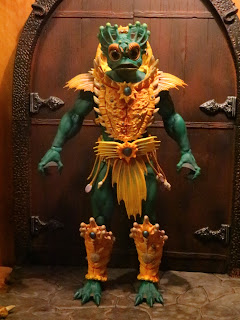 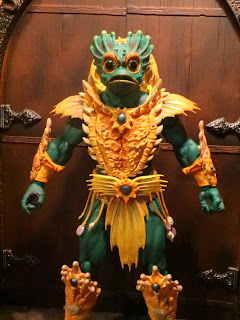 
* Mer-Man is one of those characters who just gets cooler over the years. The original Mer-Man is nothing to scoff at, but the 200x Mer-Man was incredible. Then came the MOTUC Mer-Man who was the best one yet. Now we get the Mondo version and this guy is incredible. While he has some standard body pieces as the previous released figures, you'll never really notice it due to how much crazy armor Mondo has given Mer-Man. His armor is incredibly detailed and really elevates Mer-Man to another level. I love it! 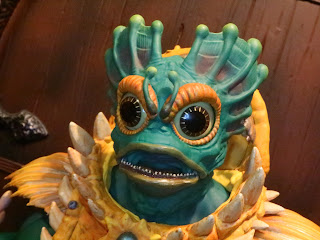 * Mer-Man comes with three portraits. The standard portrait is this really cool portrait with a hinged jaw, short, hooked teeth, and very dark fish eyes. The eyes are fishy indeed, not unlike the Amphibian Man from The Shape of Water, and they give Mer-Man a very inhuman look. I thought the more "200x" inspired portrait would be my favorite. This one has really won me over, though. I love it! 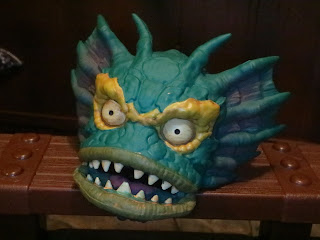 * This is the exclusive portrait. It also has a hinged jaw and the likeness is definitely a more traditional Mer-Man appearance with the larger head fins, bigger, more cartoonish eyes, and larger teeth. It's a great portrait, and I have no doubt that some folks will prefer it over the standard one as it seems more in-line with the Filmation design and other previous Mer-Man toys. 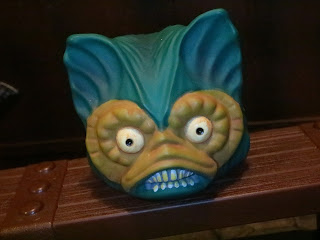 * The third portrait is a larger scaled version of the vintage toy head. It's probably more of a novelty than a portrait anyone would actually use on this figure but it's a fun addition nonetheless. So far all of the figures in the line (except for Scareglow, oddly) have come with these vintage portraits, so it's kind of a cool tradition. 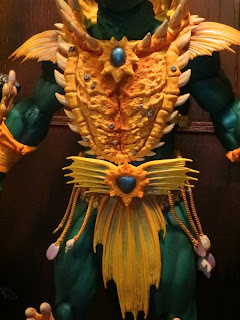 * Mer-Man clearly has the most impressive armor in the line. I mean, just look at it! The armor looks like it's made from a variety of aquatic elements and is adorned with teeth, jewels, shells, and other trinkets. The paintwork also really accents the sculpt making it even more impressive. 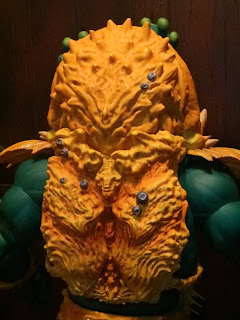 * Flip Mer-Man around and you'll see that the back of his armor looks like it is made of coral and covered with barnacles. 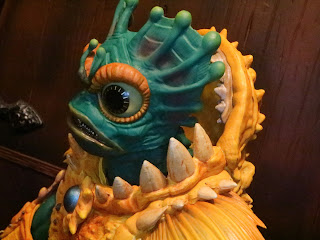 * The "collar" of Mer-Man's armor is crafted from what might be the jaws of some large ocean creature. How incredible, right? The details here definitely tell the story of Mer-Man being a former king of the ocean rather than just a random fish guy working with Skeletor. 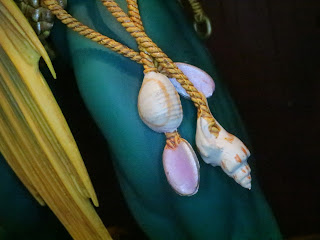 * One of my favorite details are these little seashells hanging off of Mer-Man's belt. How cool! The paintwork is also mighty impressive for such small details. 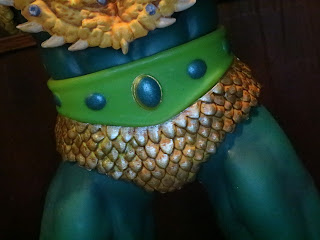 * Mer-Man's belt is removable, allowing you to display him showing off his Namor inspired fish scale trunks if you want. While I doubt you'd want to display him without his armored belt, it is pretty cool that Mer-Man has scaly trunks rather than the furry trunks everyone else has. 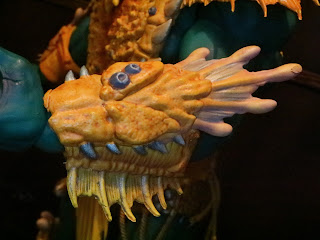 * The vintage Mer-Man just had fins; it wasn't until the 200x Mer-Man release that the Ocean Warlord had fin-like bracers. This guy goes a step further with barnacle encrusted, shark tooth adorned, fin sprouting battle bracers! They're removable (just slide them over his forearms) but why would you want to take something like this off? They're amazing! 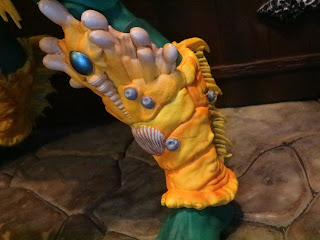 * Mer-Man is also wearing some incredible greaves that are also incredibly well decorated. I love the pearls and the various shells used for decoration. They're not removable, by the way. 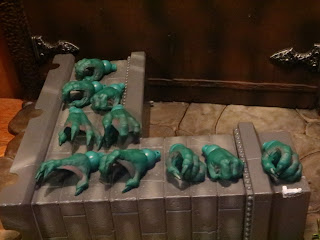 * Mer-Man comes with 5 pairs of interchangeable hands, giving him the ability to use all of his weapons and to take all sorts of poses. He has swimming hands, open grasp hands, pistol grips, fists, and standard grips for his sword and staffs. They swap easily with large, sturdy pegs. 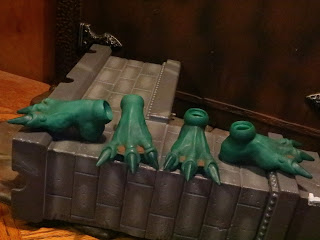 * Mer-Man also has something pretty unusual: Swappable feet! Mer-Man has a pair of regular, flat feet and a pair of arched feet, probably for putting him in swimming poses. His feet have some long, sharp clawed toes and a bit of webbing between them, too. I love how Mondo seems to be wiling to include some really unique pieces with characters who require them. It makes me even more excited to see what figures they reveal next! 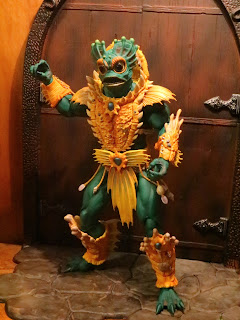 *  Mondo's MOTU figures do not feel like your traditional 1/6th scale figure but more like oversized Masters of the Universe Classics figures. Like the other figures in the line, Mer-Man is really heavy, but also very durable. I love how sturdy he feels. Even the armor, which you might think would be a bit brittle, it actually very sturdy. Mondo continues to do a great job with the quality here which should inspire confidence in buyers. The articulation on these figures isn't bad, either, and Mer-Man is extremely fun to pose. The joints stay together great but, if you push them to far, they seem to pop out rather than break. Customizers could have some fun with these, no doubt. 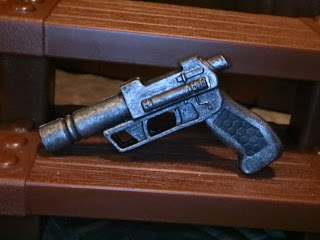 * Mer-Man's first accessory is a laser pistol. Mer-Man did use a laser pistol in the Filmation series from time to time, so this makes for a cool little nod the character's appearances there. It's a great accessory with some excellent paint applications and Mer-Man looks oh so cool wielding it. Nice! 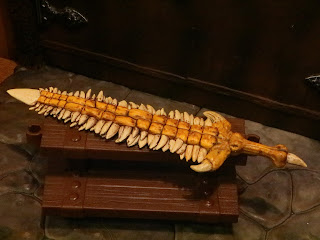 * Mer-Man's infamous "corncob" sword has never looked better. It's clearly not one of those little ears of corn here; this thing is made of coral and covered in razor sharp fish teeth and random claw bits. The paint is excellent as the sword has a dark wash and lots of paint to bring out all of the detail. Perfection! 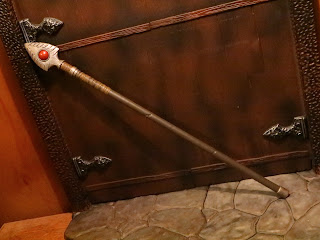 * The Mondo exclusive Mer-Man also comes with a spear from the Filmation episode "Teela's Quest."  The spear looks excellent and the Crimson Pearl is mounted in the tip so that Mer-Man can summon Bakkull! 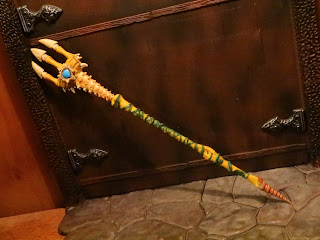 * Mer-Man's fourth weapon is a version of his trident, an accessory developed during the 200x era. This might be the most impressive accessory here as it appears to be made of multiple different materials: Coral, bone, shark teeth, seaweed, and a giant conical seashell. This thing is amazing! 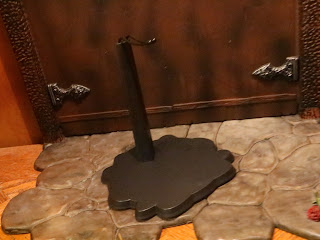 *   While you may not "need" it, Mer-Man comes with the same black plastic display stand with a metal display hook that the other figures have. The hook rests under Mer-Man's crotch to keep him standing. Aesthetically it's not the best design for a stand but it works quite well for a heavy figure like this. 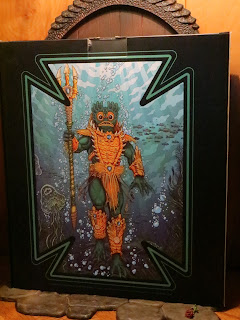 *  The packaging is incredible and very collector friendly. It features a Snake Mountain themed slipcover and a magnetic five panel window box with new artwork of Mer-Man. The packaging design is by Brent Ashe while the artwork is by Florian Bertmern. 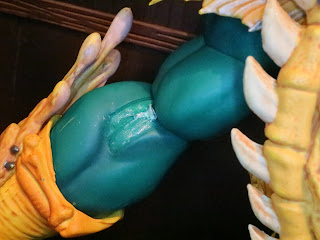 
* The only problem I've noticed with this figure is that Mer-Man's right elbow has a bit of extra flashing in the joint. It's a simple QC issue, but it's worth pointing it. 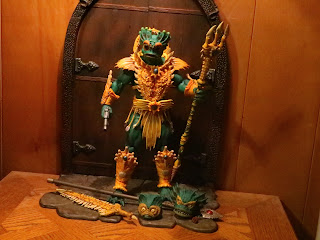 Mer-Man is absolutely the best figure released in Mondo's Masters of the Universe line yet. He's incredible with some of the best sculpting and paintwork around and lots of amazing accessories. I preordered this guy last fall and he just showed up out of nowhere last week, making for an incredible surprise. This guy is an Epic figure and easily the best Mer-Man ever released so far as I'm concerned. He'll be a tough figure to top for Mondo, but I have high hopes for the upcoming Man-At-Arms. Let's hope he goes up for preorder soon...

If you're a fan of Mer-Man, the guy who made talking to fish cool, then check out my reviews of the M.U.S.C.L.E. standard Mer-Man and green Mer-Man figures, the Loyal Subjects' Mer-Man, Super7's neo-vintage Mer-Man, and the ReAction Mer-Man (Carry Case Color).

For more Masters of the Universe from Mondo, check out the following:
Faker (Mondo Exclusive)
He-Man
Scareglow
Skeletor
Posted by Barbecue17 at 2/21/2020