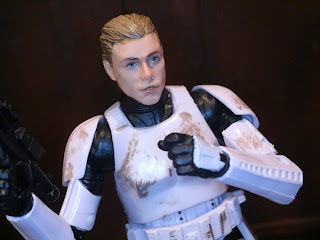 For Father's Day 2019 Target actually advertised a few exclusive Star Wars figures that they were carrying including figures from the Kenner inspired Retro Collection, a Vintage Collection Han Solo in Stromtrooper Disguise, and, the subject of today's review, Luke Skywalker (Death Star Escape). Interestingly, rather than having these figures in the regular toy aisle, Target had then in the men's clothing section. Of course, immediately after Father's Day Target began clearing them out. What? Yup, it seems that Target had these coded as holiday merchandise and began offering them on clearance. Currently you can find these on Ebay at some great prices (below original retail) so if you want this guy jump on him now and get a deal. While he's largely a rerelease of the Phase II Luke Skywalker (Stormtrooper Disguise) with a new portrait and some additional paint applications, he is quite nicely done. Let's check out Luke Skywalker (Death Star Escape) after the break... 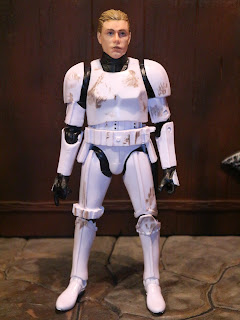 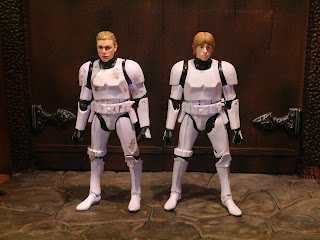 * On the left is the 2019 Luke while the 2015 Luke is on the right. As you can see, these two use the exact same "shortened" Stormtrooper body. The only difference between the two is that the headsculpts are different and the 2015 Luke features a clean paintjob while the 2019 Luke represents Luke in the Death Star trash compactor during his run in with the dianoga. For the full story check out that review as I'm just going to be hitting the highlights. 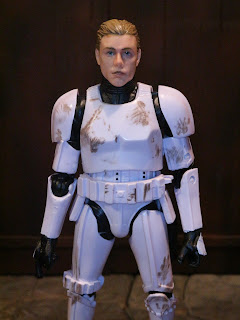 * The articulation on this mold is starting to feel a bit outdated (the articulation on most newer figures is so smooth now) but the sculpt is still really strong. Luke is indeed shorter than your average Stormtrooper with a shorter torso. He also has a unique belt that features a clip to store his comlink and with the grappling hook visible on the back. The main difference that sets this figure's armor apart from previous releases are the various marks of grime and gunk from the Death Star trash compactor. It's not overdone and looks pretty convincing. 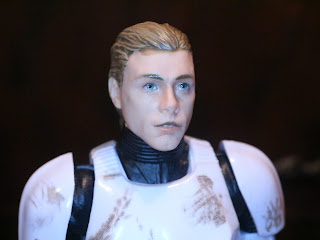 * Luke's portrait i the other big selling point here. I think what makes this seem a bit off at first is that it features Luke with his hair wet and slicked back with an unusual expression on his face. When looking at it on display it might seem off but put Luke in a bit of a action pose and it seems much better. It is a good sculpt, just with a unusual expression. The face printing is spot on, as usual. 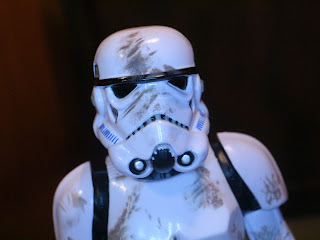 * Here's Luke's helmet. It's the same as the helmet on the previous figure but it also has the nasty paint applications on it. It looks great, although Luke definitely had thrown his helmet away by the time he was in the trash compactor. 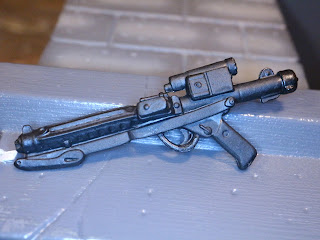 * Like the majority of figures in the Black Series, Luke comes with an E-11. This is the same as pretty much every other one released in the line. Nice sculpt, though no extra paint applications on it. 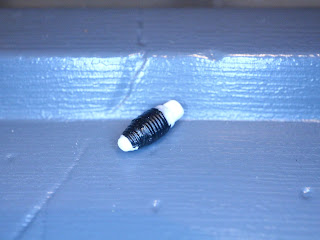 * Luke still has the tiny comlink, a device which is crucial to the scene this figure is from. How else are you going to call C-3PO to save everyone's bacon without the comlink? 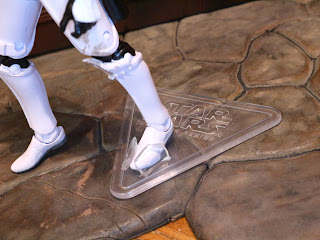 * Luke comes with the same display stand as the Imperial Jumptrooper which makes me think Hasbro might be including these with exclusive Black Series figures going forward. I hate to knock an extra but after having one of these for a couple of months and now playing with this new one, this seems like such a useless stand. The foot clip is too small for both figures it has come with thus far and the placement is weird. It's such an odd design and just seems poorly thought out. 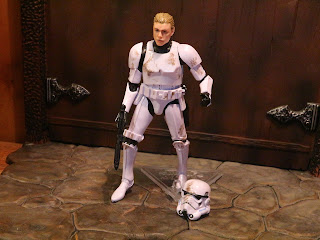 Being that he's a scene specific rerelease of a previous released figure, Luke Skywalker (Death Star Escape) isn't the most exciting or necessary figure but he is still a solid release. Overall I like him although I do wish Hasbro had either included a dianoga (turning it into a deluxe release) or at last a dianoga tentacle like the POTF2 12 inch figure. He's still a Good and a 1/2 figure, though I do feel the articulation and Stormtrooper mold are starting to show their age. Since Target's clearing these out I'm curious to see if these turn out to either be super easy to find or become notoriously elusive in the future.

Guess what? I've now reviewed so many Luke Skywalker figures that he has earned the distinct honor of having his own review archive. Check out Tosche Station for a mini-archive of Luke Skywalker reviews!