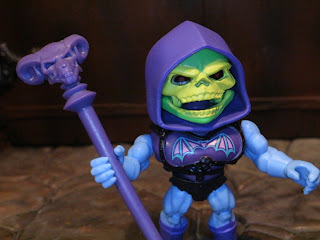 A little under two weeks ago I reviewed The Loyal Subjects' Battle Armor He-Man figure and now I'm checking out his counterpart, the Evil Lord of Destruction Skeletor, now clad in his Battle Armor as well. Hot Topic had an exclusive version of this figure released at the end of 2018 which featured battle damage on the chest plate of his armor, but this version is the standard option of Eternia's chief villain. Like with He-Man, Skeletor has a 2/12 rarity, meaning there are typically 2 of these guys in a case. Has anyone actually seen these in stores anywhere, though? I ordered a case online but I haven't heard about any of these showing up anywhere. You might have to head to Snake Mountain to find this guy! Let's check him out after the break... 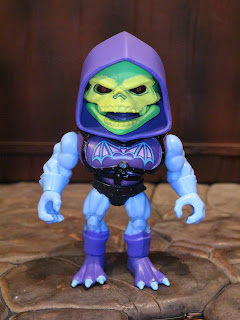 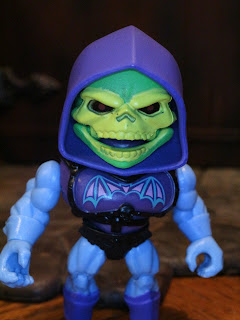 
*  Like I said in my He-Man review, these really are great looking smaller action figures. They might be a little too tall to be called minifigures but, compared to the usually bulky MOTU toys, these guys are definitely smaller. They really do look like miniature versions of the MOTUC figures, don't they? They have the traditional muscular, barbaric proportions you'd expect from a MOTU figure, but here you get the metal rivets of Skeeltor's classic battle armor. I love this look, particularly the green and purple bat. The paintwork is very neat and very clean here, allowing the bold colors to still standout like on the vintage toys. 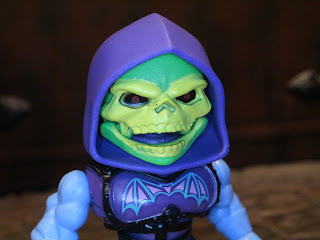 * I'm always a sucker for Skeletor and this little guy is excellent! His hood is actually a separate piece, so his skull is actually loose in there. Well, not loose but it is separate from the hood which is not something I can recall on many Skeletor toys. It's a great feature! The mouth and eyes are recessed and hollow, giving a lot extra depth to the sculpt. 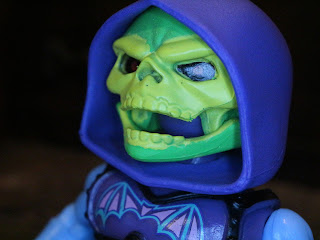 * Skeletor actually has an articulated jaw! How cool, right? This is such a fun feature as you can close the mouth for a fairly mean looking Skeletor or open the mouth for a great laughing headsculpt! Incredible! 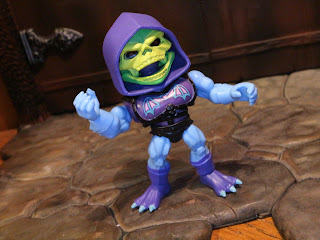 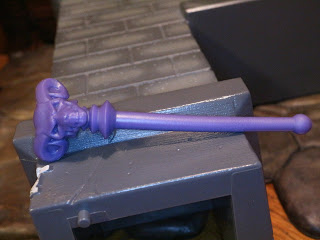 * Skeletor includes quite a few accessories, the first of which is his classic Havoc Staff! It's a nice sculpt, though the ram skull is a little smaller than I would expect. Still, it's recognizable and goes with the figure perfectly. 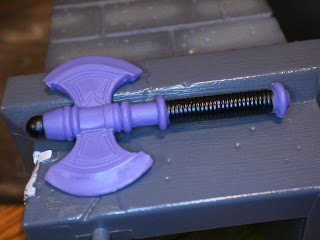 *  Skeletor includes the purple version of the classic He-Man ax and, as you might remember, I love this ax. I've always loved the design as it seems so evocative of the earlier, more savage era of MOTU. This is incredible and I particularly like the black highlights. 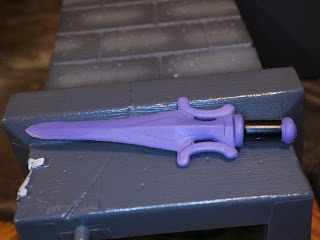 * Skeletor also includes the classic purple version of the Power Sword, too. Like He-Man's sword, this one really reminds me of a mixture of the classic toy inspired sword and the Filmation Power Sword. 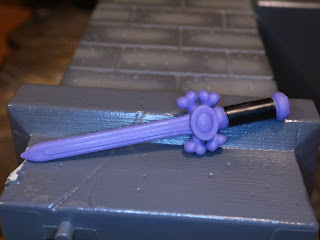 * The last accessory is the sword Skeletor used in the Filmation cartoon. I love that The Loyal Subjects included both swords for Skeltor, as it kind of gives nearly every fan something they'll love to pose the figure with. 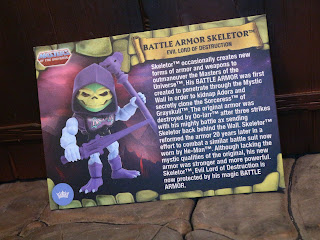 * To add a bit more personalization and fun to each release The Loyal Subjects adds a bio card. It's a cool little extra that uses the MOTUC bio for Battle Armor Skeletor here. The back features a checklist for series 2, as well. 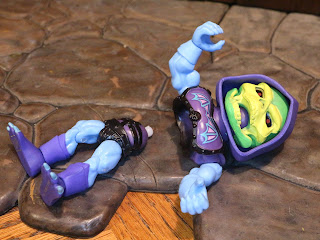 * Don't worry! Skeletor isn't broken! The balljoints just detach very easily. That's not a huge problem in and of itself but the joints do seem to be rather thin. Much thinner than I'm comfortable with for joints you'll have to pop in and out. Be careful and gentle when popping these back into the sockets! 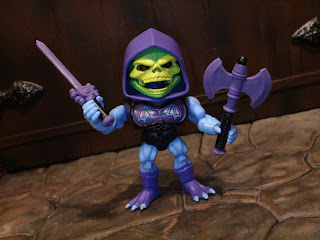 I like these figures quite a bit and while Battle Armor He-Man was a Great and a 1/2 figure, Skeletor is an Epic. He's got all the coolness of the He-Man figure but comes with four weapons instead of three and features a hinged jaw. A Skeletor figure with a hinge jaw! That's amazing! I own many Skeletor action figures and while this isn't my favorite scale of MOTU action figure, this Skeletor probably gives most other Skeletors a run for their money. If you're a fan track this guy down. He's an excellent mini action figure that will have you cackling with delight!