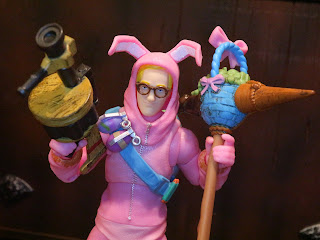 One of the cool things about the Fortnite designs is that they seem to be full of little pop culture references. Take the Rabbit Raider here: This is clearly an action figure of Ralphie from A Christmas Story as a maladjusted adult. That's why I bought him, anyways. The Fortnite: Legendary Series has been a huge surprise and considering they're sold at mass retail for the average going rate for 6 inch scaled figures, you get a ton of value. The Rabbit Raider definitely stands out on the shelf! Large pink bunnies just tend to do that, though, don't they? Apparently is was sold as an alternate costume in April 2018. Of course, there seems to be a Joney head included with this set to capture a version of the character's appearance in Save the World. I've never played that, though, and I've probably only played Fortnite 5 or 6 times. What can I say? I'm just a sucker for cool toys. Let's check out the Rabbit Raider after the break... 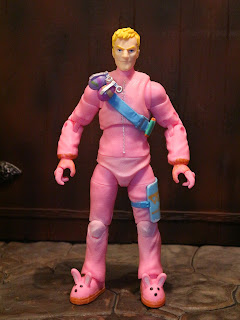 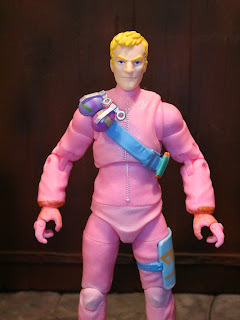 
* What you're getting is an action figure of a guy in a pink bunny suit. This actually looks quite a bit like pajamas, as the suit looks to have a pajama-like texture and fit to it. It doesn't appear to be painted on but actually looks kind of loose and oversized. The pink color is bright and noticeable. There are a few places where the pink color seems a good bit paler, but I think that's intentional to show areas where the material might be stretched and moved a bit more. 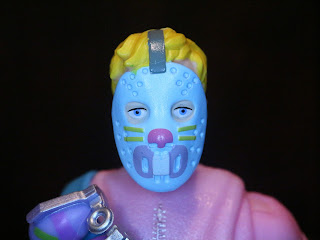 * The Rabbit Raider comes with three alternate face plates. Yes, these aren't actually alternate heads but face plates like a number of import toys have utilized. The first one is a hockey mask painted to look like a very off-putting and unsettling rabbit. The Fortnite style is definitely very colorful with simpler designs, and that's actually captured rather well here. 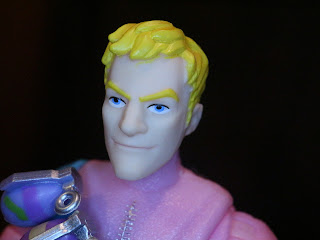 * The second swappable face plate is, I believe, the Jonesy character from the Save the World campaign. It looks a fair amount like the character and gives you a more "heroic" looking option for the figure. 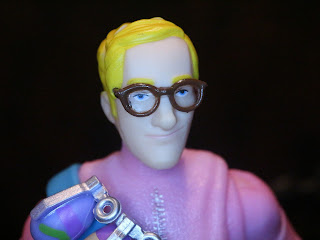 * Last up is the face plate that looks like Ralphie from A Christmas Story. Check out the grin, the combed hair, and the big glasses. Yup, this guy wants a Red Ryder BB gun, no doubt about it. The glasses are actually a separate piece attached to the face plate and, surprisingly, they look pretty good. Sometimes glasses don't work so well in the 6 inch scale. 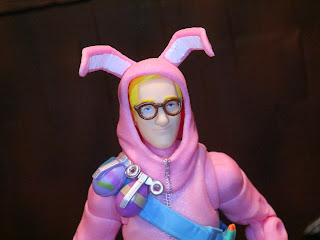 To complete the look of the figure is a pink bunny hood. It's made from a softer, more liable plastic than everything else. It easily fits over the Rabbit Raider's head and completed this pink nightmare perfectly. 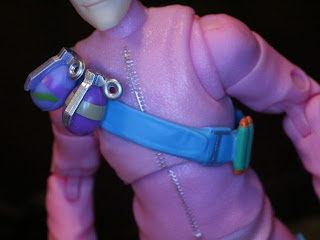 * The Rabbit Raider is fully armed and he's toting a bandolier with some Easter egg grenades and some bullets that look kind of orangeish. Are they supposed to look like carrots, perhaps? 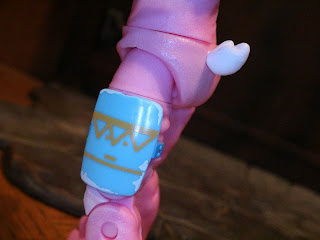 * The Rabbit Raider also has a fuzzy cotton tail on the back of his costume and some sort of armored panel on his right hip that seems like it has been painted. It looks a bit weathered around the edges, too. I like the look, but does anyone know the point of this? 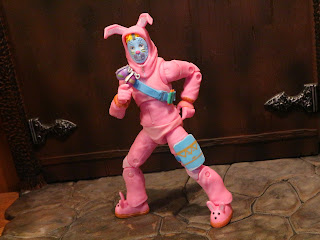 * The articulation on the Fortnite Legendary Series figures is quite nice. While the Rabbit Raider is missing a few joints such as the toe hinges and boot swivels, the inclusion of lots of swivel/ hinges, double hinged elbows and knees, and butterfly pecs allow this guy to take some crazy poses and use two-handed weapons with ease. 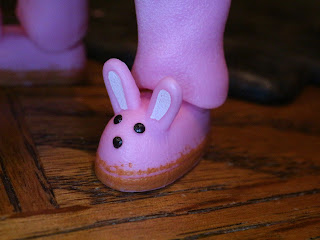 * The Rabbit Raider is really committed to his look, so he's sporting bunny slippers. They're cute and look kind of like some sort of marshmallow Easter confection! 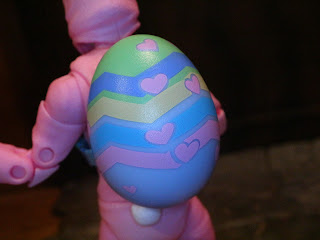 * For his backpack (or "Back Bling"), the Rabbit Raider comes with a giant Easter egg. It's actually called the "Hard Boiled" Back Bling and it's got a lovely, pastel paintjob. 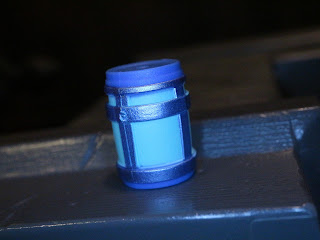 *  Like Havoc, Rabbit Raider also includes a Chug Jug, a potion of some sort from the game. I'm not familiar with it but I'm sure fans of the game who collect these love power-up based accessories like this. There is actually a slit in the side so that Rabbit Raider can grip a larger accessory like this, so that's a cool plus. 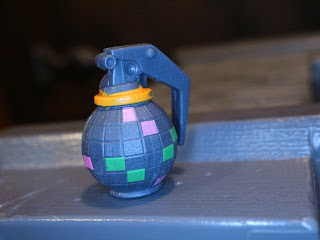 * The Boogie Bomb is a grenade that makes the other characters dance. It's a cool looking weapon that looks like a grenade mixed with a disco ball and it actually even has some colored panels on it. 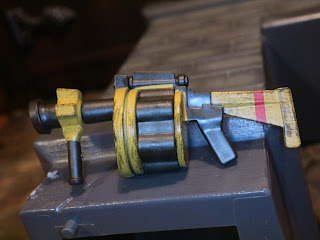 * The Rabbit Raider comes equipped with a grenade launcher that still captures the Fortnite look and feel while also having some very nice weathering on it. Interestingly, the style of these weapons look like what the weapons in GoldenEye007 looked like when you viewed them inside of the watch. 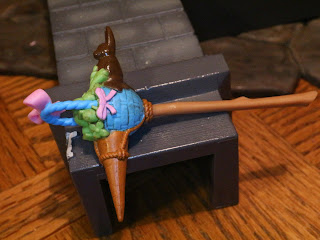 * The most complex weapon in the set is a Harvesting Tool that looks like an Easter basket containing a chocolate rabbit and a giant carrot. Dang, that carrot looks sharp, doesn't it? 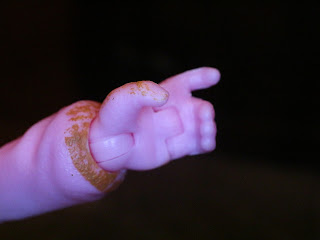 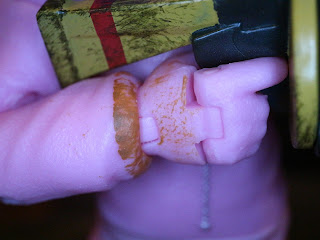 * Speaking of the hands... what the heck is on the wrists here? I'm guessing it's supposed to be like a fur collar or something but it looks pretty rough. Kind of like the Rabbit Raider didn't wash his hands. 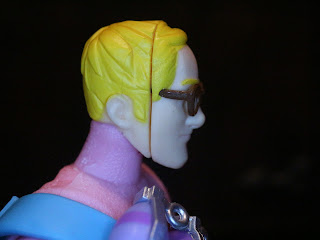 *  While the face plates are all a bit noticeable from the side, the  glasses wearing face plate looks really off. It doesn't even look like it should go with the head. This seems to be an ongoing issue with this line: Two face plates will look fine while one will look pretty off. 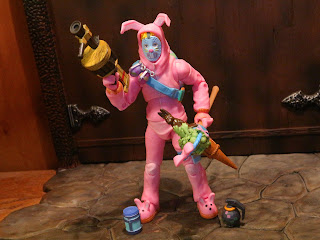 The Rabbit Raider is another excellent figure in this line. Jazwares really came out of nowhere and knocked this line out of the park, didn't they? Seriously, for the same price as a Marvel Legends, Star Wars: The Black Series, or DC Multiverse figure, you're getting as much or more articulation and lots of accessories. If you don't dig the designs then these won't work for you but if you do, these are some great figures. Lately it feels like Hasbro and Mattel have been the only companies dominating the mass market action figure market, so it's nice to see Jazwares emerge as a potential legitimate rival to bring some competition. Epic!


This is the first figure of the Rabbit Raider I've reviewed. For more Fortnite: Legendary Series reviews, check out the following: