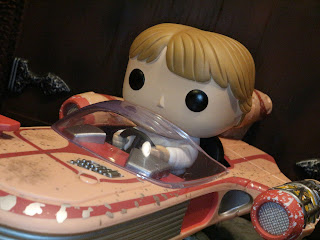 Today I'm checking out the lone POP! vinyl from the most recent Star Wars Smuggler's Bounty Box from Funko: Luke Skywalker with Speeder! Celebrating the 40th anniversary of the release of Star Wars: A New Hope, this crate included a few items that hearkened back to classic elements from that film. The set includes the standard patch and pin (Luke Skywalker and Chewbacca, respectively), Han Solo and Greedo salt and pepper shakers, some Star Wars wristbands, and this oversized POP! vinyl piece. I really like these deluxe POP! vinyls and this might be one of the best yet. While Hasbro is releasing a Luke Skywalker with landspeeder later this summer, Funko has beat them to the punch. This is a pretty iconic Star Wars vehicle that looks great on your shelf. More details after the break... 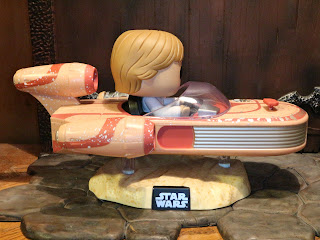 Non-Scalper Price: Included in the 40th Anniversary Smuggler's Bounty box along with salt and pepper shakers, wristbands, a pin, and a patch for $25 dollars. 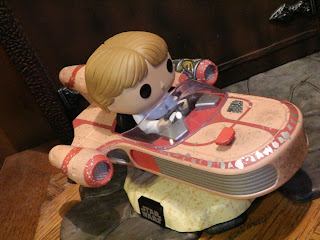 * First things first: This is an incredible looking product. It also surprises you by how large and solid it is. It definitely delivers some "oomph" and is a very pleasant surprise. It's only a single seat landspeeder, so it's not insanely accurate, but it walks the line between being accurate and stylized very well. 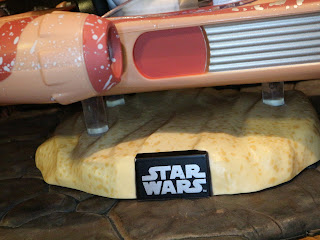 * Unlike the Tauntaun, the landspeeder does not detach from the base. Still, Funko did do a great job of using clear plastic columns to give the speeder the illusion of hovering. The desert sand base is pretty cool and the black and silver Star Wars logo is included to tie this piece in with the standard display stands most other figures include. 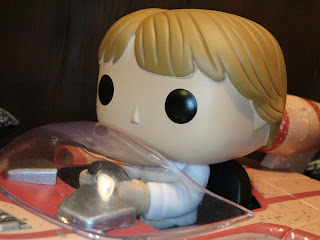 * Luke Skywalker looks great sitting in the cockpit of his landspeeder. Funko has released a 'Tatooine" Luke Skywalker in the past, but this one is uniquely sculpted to sit in the drivers seat and interact with the steering wheel. Luke isn't removable, but I doubt you'd want to display him any other way. 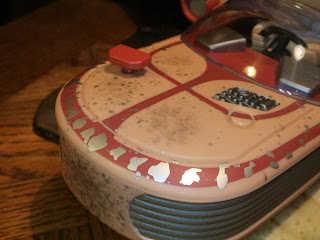 * The paintwork on the landspeeder is incredible. Look at all the grit and grime across the hood! That's incredible! The flaking paint looks grand, too. This is an amazing looking piece and you can see that Funko really put some effort into it. I hope Hasbro's Black Series landspeeder looks this good. 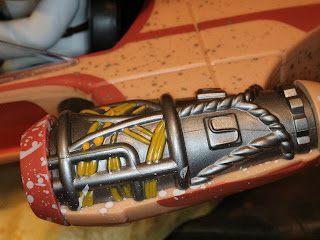 * There really are some very intricate details here and the paintwork and sculpted details are insanely neat on them. Just as an example, here's a look at the exposed engine on the speeder. That looks far nicer than you'd expect on a POP! item, doesn't it? 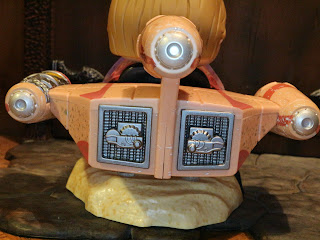 * The textures are also really impressive. I love the grated look on the back of the speeder. 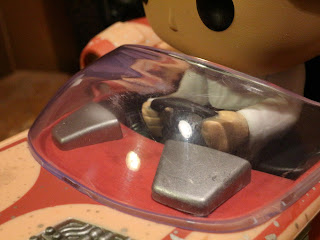 * The windshield is translucent and it looks very nice although there are some really odd scuff marks on it. There are quite a few. I wonder what happened? They don't appear to be intentional weathering; they really just seem like flaws in the plastic. 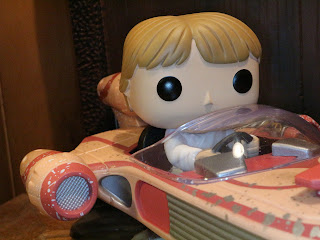 I really like how Funko is handling the Star Wars POP! license. I don't pick up everything from the line (not even a quarter of it, probably) but I've been very happy with most every POP! item I've received in these packages. This is a Great and a 1/2 item! This month, though, I find the rest of the box to be a bit underwhelming. Salt and pepper shakers are cool, but they're definitely one of those items that you rarely have need of more than one set (we have a Nightmare Before Christmas set that has been in service for over 12 years now), unlike mugs and t-shirts where you can always add find a use for one more. The wristbands didn't really thrill me, either. My 3 year old grabbed them and has worn them a few times, but they're not the biggest hit. While Luke Skywalker with his Landspeeder is an incredible item, the 40th Anniversary box is definitely one of the few underwhelming crates I've received in this crate subscription service.