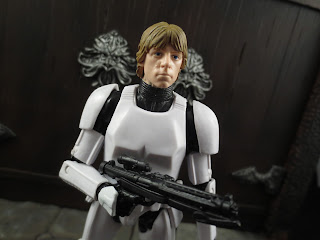 Remember back when I said I was limiting my Black Series collecting to "troopers, bounty hunters, characters from the first year of The Power of the Force II, and the odd character I have special affection for (i.e. Admiral Ackbar)?" Well, that train has sailed. I'm pretty into Star Wars: The Black Series now and I've been picking up some figures I missed or skipped the first time around. Today's figure is a Phase II figure which I actually purchased at the Charlotte MiniCon a couple of weekends ago: Luke Skywalker in Stormtrooper Disguise. Oddly enough, though, the packaging just calls this Luke Skywalker and doesn't reference the Stormtrooper disguise. Weird, huh? Anyways, let's take a closer look at this companion piece to Han Solo in Stormtrooper disguise. While Luke is pretty similar to Han in many respects, there are actually some cool differences between this figure and the other Stormtrooper figures in the line. Ready for a closer look? Then join me after the break... 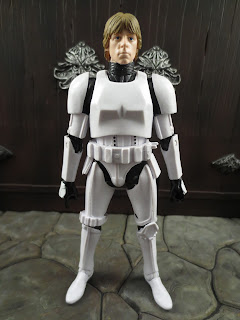 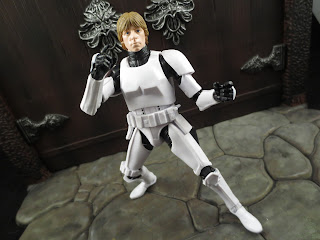 * Luke has some pretty nice articulation. That makes since he utilizes most (but not all!) of the basic Stormtrooper body which I've looked at one, two, three, four times already! This guy works pretty much the same and feels nice and sturdy. Some of the joints are a bit rubbery, though, something Hasbro has done away with for many of the new figures. 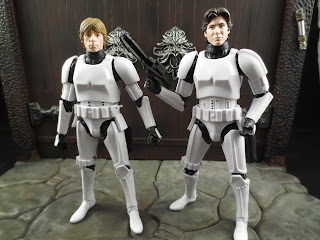 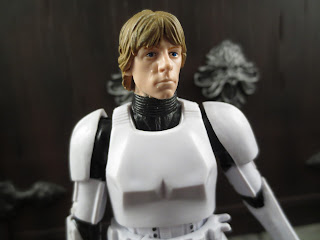 * Luke's headsculpt is quite good here. It's the same portrait as the X-Wing Pilot version from series one of Phase I but that makes sense. There's less paint work here, but honestly I think it looks a bit more natural.

As you can also see, Luke has the ribbed collar around his neck, something the standard Stormtroopers are missing. 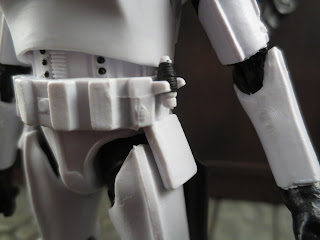 * One difference between this set of Stormtrooper armor and the rest which have been released is that this one contains a slot to hold a comlink. Remember Stormtrooper TK-421 who had his own comlink? Well, now this figure of Luke (who stole TK-421's armor) has one too! It's a tiny piece but it fits nicely in Luke's left hand or in the clip on the belt. That's a very cool detail, but it's not over yet... 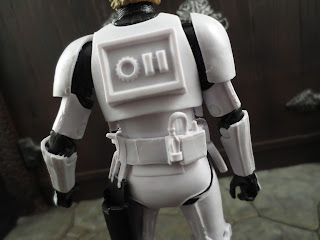 * When you turn this figure around you can see how Luke's torso is new due to the port on the back of his armor being different than the standard troopers. The basic torso used for every Stormtroopr, Sandtrooper, and Han features a actual hole for the Sandtrooper's survival pack. This one is filled in, however. Plus, look on the bottom right: Luke has the grappling hook and reel attachment on his belt. Remember how he had a grappling hook to swing across the chasm inside the Death Star? Well, here's where he got the grappling hook. 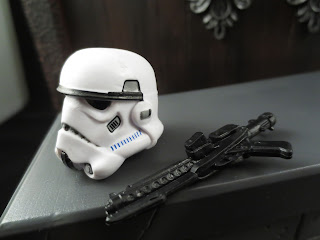 * Besides the aforementioned comlink, Luke comes with the two default pieces of his Stormtrooper disguise: A helmet and an E-11 blaster. The blaster doesn't have any paint applications but the helmet sure does. It looks great! This might not matter to anyone else but I will report that the Helmet is different than Han's helmet. Luke's has some ridges inside to help the helmet stay more securely on his head without wobbling around. 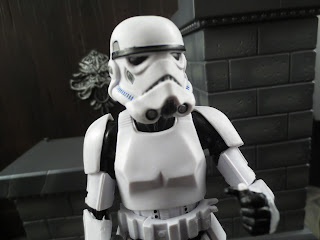 * Like Han in disguise, Luke also looks pretty convincing with his helmet on. There really aren't any crazy odd proportions here to mess things up; Hasbro did an admirable job of keeping the helmet and Luke's head correctly sized. 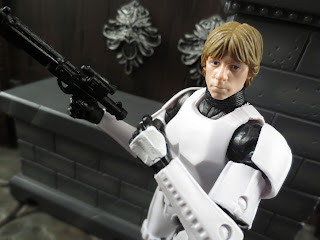 * I'm digging this guy a lot. He's as good as any of the Stormtrooper figures but also features some cool unique additions. While I still wish either he or Han had come with the manacles for Chewbacca to complete the disguise, it's nice to at least be able to complete the Stormtrooper disguise set. Luke's a pretty nice figure and one I'm content with giving a Great rating too as well. He can still be found for the original retail price but if you're going to snag him you had better do so soon. The prices are creeping up on the Phase II Black Series figures.