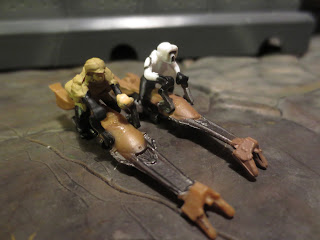 Today I'm doing a micro review of one of the Micro Machines three packs from last year. While I've been really harsh on Hasbro's playsets (which are terrible) their vehicles have been quite nice. They've offered a ton of variety. The paint applications could be improved but the sculpts are rather good. I was out at the store and stumbled upon the Endor Forest Battle which includes an AT-ST and two Speederbikes: One with Luke Skywalker and one with a Biker Scout. Read for a short look at some tiny toys? Then join me after the break... 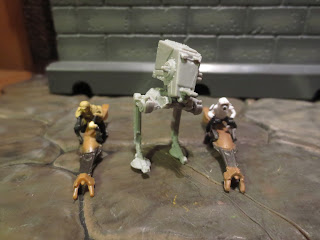 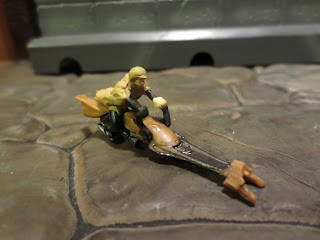 * What's really cool about this piece is that it's an Original Trilogy piece Galoob didn't make in Micro Machines (they did release it as an Action Fleet piece, though). Galoob had a Rebel piloted Speederbike Micro Machine but it was clearly Leia in her combat poncho. This is Luke in his combat poncho and, while the paint isn't the greatest work ever, Hasbro did actually paint the glove on Luke's right hand. Cool little detail! I also think the work on the undercarriage of this bike is a bit better than Galoob's, although I only have the Imperial Speederbike that came with the Chewbacca/ Endor set to compare it to. 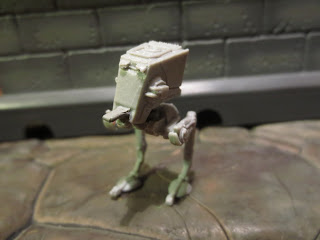 * The AT-ST is a vehicle that Galoob released many times in the original Micro Machines line and it was one I always found a bit problematic. It was cool that the legs on the original actually swiveled but you could keep that thing standing to save an Ewok. This one stands nicely, though, and it also has a swiveling cockpit. I do wish it had a few small paint apps but the sculpt does seem a bit sharper than Galoob's. I'd say that overall this one feels like a bit of an improvement which is really a pretty high compliment. 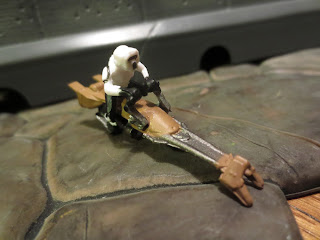 * Hasbro wisely gave us another Speederbike with a Biker Scout on it so Luke has someone to race. While the Biker Scout sitting on top of the Speederbike isn't as impressive as Galoob's, the bike is a bit better (the stuff underneath looks more detailed and accurate). Heck, I imagine Micro Machine enthusiasts are probably just thrilled that you can run to your local retailer and snag some Speederbikes off of the shelf (I've pulled a couple of these from the blind bags, too!). 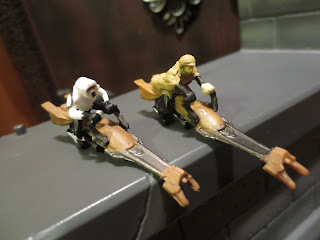 I really, really like this set. It's a Great set and definitely one of the best three-packs Hasbro has offered. There's not a stinker in the set! Honestly, the sculpts here are actually minor improvements on some of Galoob's now 20 some year old work. For $5 bucks, I'd find it hard to be disappointed by these so long as you know what you're getting (they're always some idiot on Amazon or something who complains they bought these for their kids and didn't realize they were so small). They still have holes for stands on the bottoms (but include no stands) so drag your old stands out and have some fun!

I've reviewed plenty of other Micro Machines from both Hasbro and Galoob, including: