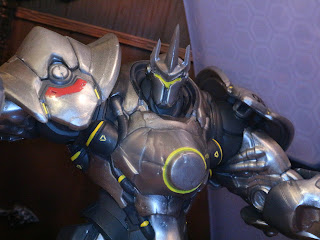 Today I'm finishing up my reviews of series 1 of Hasbro's Overwatch Ultimates with a look at the deluxe figure Reinhardt. While the standard Overwatch figures are closer in size to a regular Marvel Legends or Star Wars: The Black Series figure, Reinhardt is closer in size to an average Marvel Legends Build-a-Figure. Reinhardt comes in a much, much larger box however, so why exactly does he come in such a large package? It's because Reinhardt has perhaps the largest actual accessory I've ever seen with a 6 inch scaled action figure: An enormous energy shield! Hasbro has done an excellent job of including energy effect pieces with the figures in the Overwatch Ultimates line to replicate the in-game abilities of the characters and Reinhardt's is pretty darn impressive. This 61 year old German crusader can actually tote around his massive barrier field or set it out to protect the rest of the team. Let's check out this deluxe Reinhardt figure and see how he compares to the standard releases after the break... 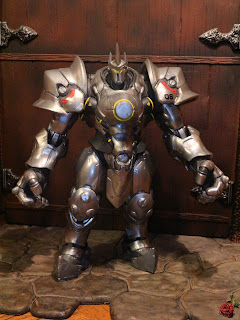 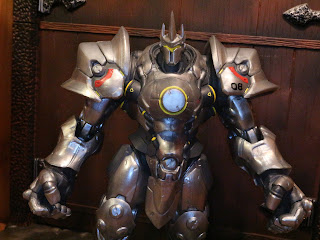 * It's tough to go wrong with an armored character like Reinhardt. Blizzard's excellent character design and Hasbro's high quality sculpting mesh nicely to craft a really cool looking behemoth who reminds me of a mixture of Iron Monger and one of the Jaegers from Pacific Rim. The sculpting might be a bit softer than on the other figures in the line but it still looks cool. 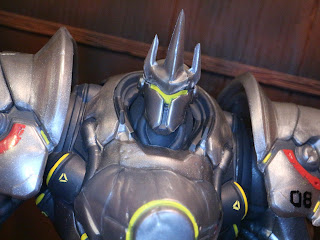 * I love Reinhardt's helmet. It's very cool, a nice blend between something you'd see in a fantasy setting and something that looks robotic and futuristic. It has a great range of motion, as well. 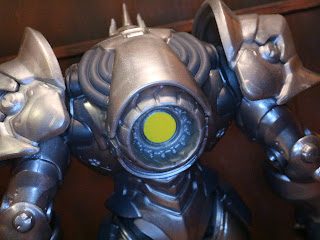 * On the back of his armor Reinhardt is toting what looks like a massive jet engine. I believe this allows him to charge forward in the game. It's a cool sculpt and definitely seems like a neat idea to make the suit more maneuverable in battle. 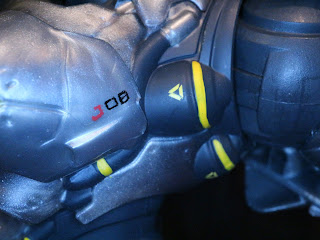 * There are lots of slick little details all over the armor. They're minor details such as yellow highlights and a the label "J08" but they definitely add a bit more life to the figure. 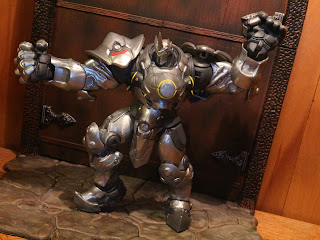 * For a bulky, armor clad figure, Reinhardt is quite well articulated. Not super-articulated by any means but he definitely has enough joints to get him in a variety of battle poses. I like that his shoulder pauldrons are hinged as well, allowing for more shoulder movement. 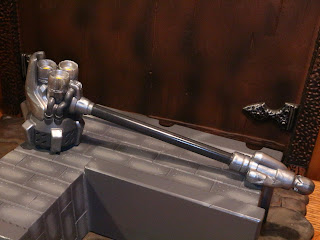 * Reinhardt's primary weapon is a rocket hammer, a massive battle hammer with three jets on the back. It's a pretty impressive accessory that looks incredible when wielded in Renhardt's hands. It has quite a few paint applications of its own, too, making it a very high quality accessory. 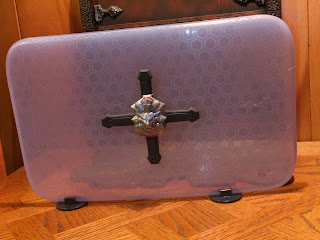 * Renhardt's second major accessory is a giant barrier field, an energy shield that Reinhardt can project from his wrist. This thing is huge! It looks like a large Tupperware lid but it's molded in translucent purple with a great texture to give it an energy shield look. It's massive: About 8 inches tall and 13 inches wide. 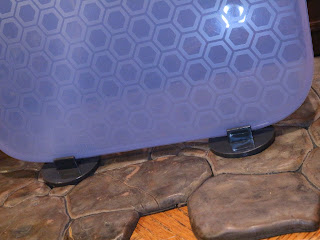 * There are two clips included which can fit onto the bottom of the shield, allowing it to stand upright as if it has been set as a barrier. I've got them on the wrong edge in the picture (they go on the long side, as the barrier is longer than it is tall) but they work about the same way. It' a cool way for the accessory to be displayed if you want to do something different with it and not have it obstructing Reinhardt. 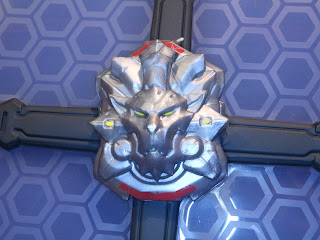 * Here's a closer look at the very, very cool lion's head symbol from Reinhardt's forearm. The lion head in the center is actually a removable piece and it can clip onto Reinhardt's left forearm. Place the lion's head through the shield and the barrier field can be toted around, too. 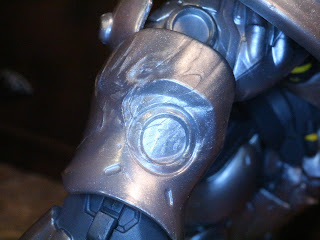 * The only real criticism I have with Reinhardt is that the plastic of his paintwork has that opalescent, swirly look that Hasbro has used off and on. I've just never liked the look of it. It just doesn't look like metal to me. I'd rather have a solid color or even have the plastic painted for a better, more solid appearance. 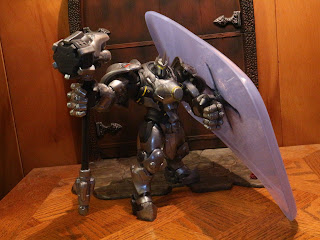 I love Reinhardt's mass and his accessories. He's definitely a very cool figure, probably a Great figure in fact, although I'm not sure he feels like you're getting a steal at $50 dollars. I got mine for 20% off during one of GameStop's regular sales and at $40 bucks, this guy feels like a better value. He's cool, but not as impressive as I had hoped. There is actually a variant coming out as an SDCC exclusive this year, which includes an unhelmeted Reinhardt head instead of the helmeted look, and camouflaged armor. Will Hasbro continue with oversized Overwatch figures in the future? Hopefully so, as the multiple sizes of figures in the line is kind of cool.


This is the first figure of Reinhardt I've reviewed on the site. For more Overwatch Ultimates figures, check out the following:
Ana (Shrike) and Soldier: 76
Lucio
Mercy and Pharah
Reaper (Blackwatch Reyes)
Sombra
Tracer
Posted by Barbecue17 at 7/08/2019