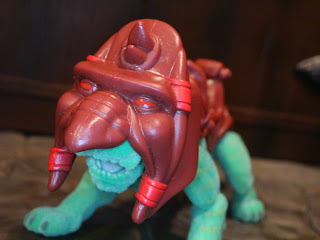 In early June I checked out the Masters of the Universe Action Vinyls Battle Cat and today I'm going to be checking out the Hot Topic exclusive variant of the figure. This time Battle Cat is flocked! While Masters of the Universe has a history of flocked figures (Panthor, Moss Man, and Kowl) this is the first time that I can recall that Battle Cat is flocked. I'm down with it, though, as it makes for an interesting variant. I ordered mine from Hot Topic online but these have been popping up in stores too, although these seem to have sold through quite thoroughly. Let's check out Battle Cat after the break... 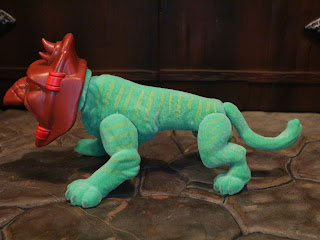 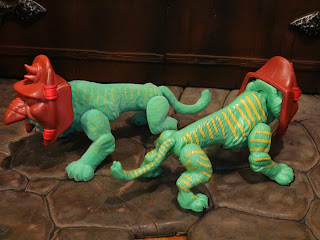 
* Overall the flocked Battle Cat (on the left) is the same as the standard release version of Battle Cat (on the right). The only difference really is just the layer of flocking on this guy. Personally, I like the standard version better due to the brighter stripes and visible paint details. Most of the details about this figure can be read on the previous review, so I'm only pointing out select details about this figure. 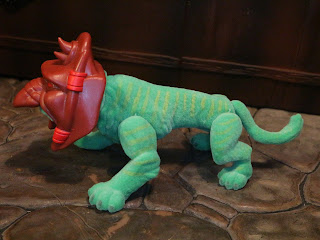 * The Loyal Subjects' Action Vinyls are 3 1/4ths inch scaled stylized action figures and Battle Cat is designed with the same stylized aesthetic. He's a very cool,slightly fuzzy looking rendition of Battle Cat. He almost feels like a miniaturized version of the Masters of the Universe Classics Battle Cat, just with the flocked texture. I love how bright and colorful Battle Cat is! 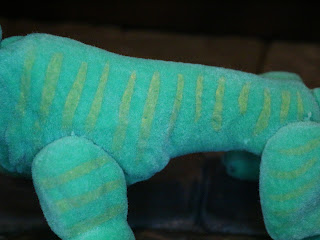 * The flocking is neatly applied and seems like it will stay on the figure. While his stripes are a but muted, they are present on top of the flocking. 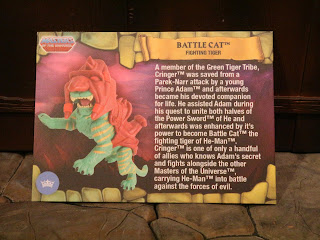 * To add a bit more personalization and fun to each release The Loyal Subjects adds a bio card. It's a cool little extra that uses the MOTUC bio for Battle Cat to here. It seems largely the same as the card included with the standard release. 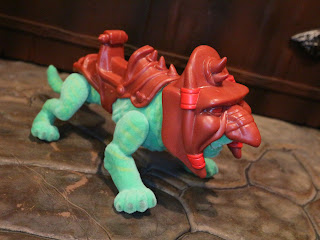 * Like the standard release Battle Cat is nicely articulated and features a removable saddle that's easy to take on and off. 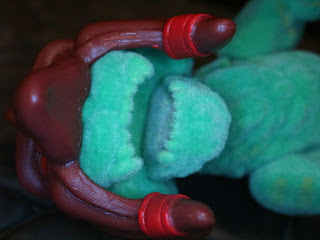 * The biggest downer that's new to this version is that the flocking covers Battle Cat's mouth and claws. Yes, his claws are green, as are his teeth and the inside of the mouth. I'm assuming this was a factory error and not an intentional choice, as it looks pretty bad. Flocking Battle Cat was a cool idea that really wasn't executed all that well. 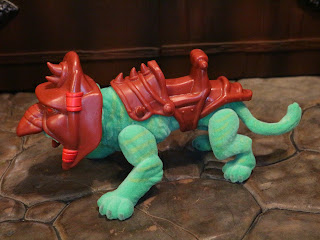 Like the original figure, Battle Cat has a great overall look, cool armor, a bio card, and solid articulation while also being far too skinny and undersized compared to the other figures in the series. The flocking is a neat idea but the fact that Battle Cat's teeth and claws are flocked is really, really frustrating. Battle Cat is still a Good figure, but he's not really any better than the standard figure. He's novel and kind of fun, but definitely a bit disappointing. Maybe we'll get a Cringer or a Moss Man done right at some point in the future, huh?

I've only reviewed a couple other Battle Cat/ Cringer toys: The M.U.S.C.L.E. Battle Cat, the VYNL Prince Adam and Cringer, and the Loyal Subjects' Battle Cat.
Posted by Barbecue17 at 7/01/2019