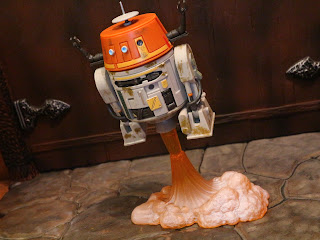 Every time I review a Rebels figure I go on and on about my love for the series. Rebels was fantastic and it's been fun to see the characters show up in other areas of the Star Wars universe. Most exciting for me was seeing Chopper show up at the Rebel Base on Yavin 4 in Rogue One. While Chopper is an animated character, Hasbro's aesthetic goal with the Black Series is to depict all characters from animated and comic media in a more realistic style so we're kind of getting a version of Chopped appearing as he looked in Rogue One. This guy is loaded with features and definitely makes for one of the most feature intensive figures in the newest series of Star Wars figures. Interestingly, this series has consisted of 50% droids. Crazy, huh? Let's check out Chopper/ C1-10P after the break... 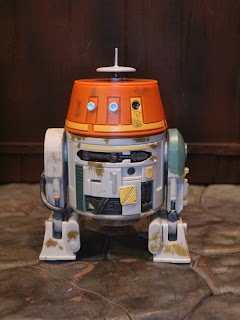 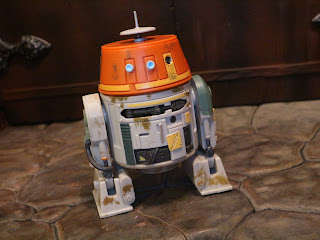 * Chopper looks excellent. Unlike the other astromech droids in the series, Chop doesn't reuse any parts from prior releases. He's a completely new sculpt that perfectly reflects his aged, stumpy, hodge-podge appearanc. The paintwork is excellent and manages to look neat and clean when needed while also having plenty of worn and weathered features, too. 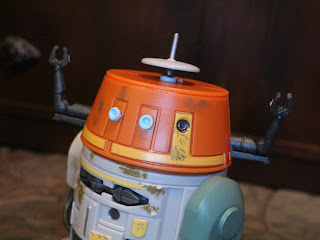 * Chopper has a very unique looking dome with plenty of articulated features. The articulated arms swing out via hinges from the sides of his dome while the radar dish on top can swivel. I do kind of wish it were balljointed but it still looks fantastic and works as intended. 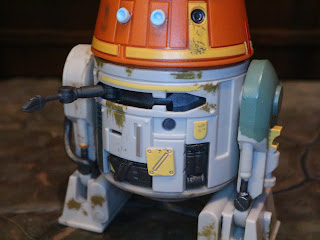 * Chopper's body is covered with little panels and even features a hinged mechanical arm that swings right out. Chopper is one seriously fun droid to play around with. 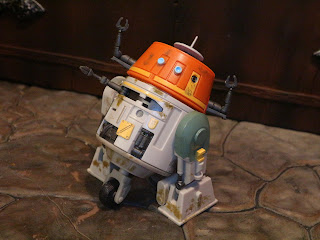 * The articulation isn't too different from many of the other astromech droids though Chopper does have more articulated arms. His legs have little wheels on the bottom and there is a removable larger wheel that can fit in the base of the droid. 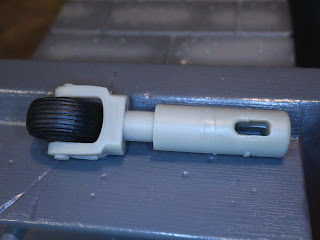 * The large wheel is removable from the bottom and can be swapped out with a booster rocket. The wheel can be tucked into Chopper's housing, slid down for usage, or completely removed. The choice is yours. 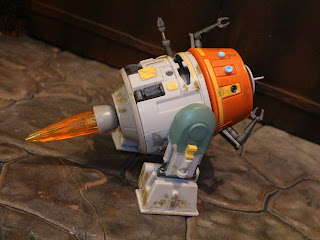 * One of my favorite accessories is the booster rocket that can fit in the base of Chopper. Chopper likes to fly around a lot and this translucent rocket booster is just excellent. It's so cool! Heck, you can even have Chopper use it as an offensive weapon. How cool, right? Yeah, I can see Chopper frying some baddies with a giant flame. 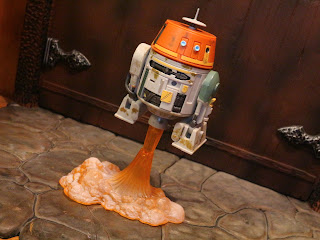 * Even cooler is this flame boost base that Chopper can fit on top of. The tip of the booster rocket's flame fits into the top of the flame effect, allowing Chopper to hover around. It's a great display piece with a nice dioramic quality to it. Heck, there's even a nice paint job on top of the translucent orange flames to give things a more realistic and nuanced appearance. 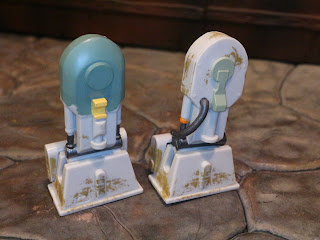 * So.. Chopper actually comes with two alternate legs. Originally Chopper has the leg on the left, which doesn't match his right leg. In the episode The Forgotten Droid, Chopper finds a matching leg. Now, you can give Chopper whichever leg you want. His legs are easily swappable and allow you to customize Chopper just a bit. 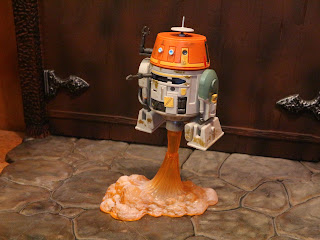 Hasbro went all out on Chopper, possibly delivering up the best figure in the newest series. At first I wondered if C1-10P was too small and too animated for the Black Series but, after looking at more images of him, particularly his appearance in Rogue One, I think Hasbro nailed it. Chopper really is a very funny, unusual looking droid and the odd, stumpy proportions definitely fit him well. This is an Epic figure and definitely shows how incredible Hasbro can make not just the figures in this line but also their accessories: Chopper feels very definitive. There's nothing really missing from him that jumps out at me offhand, which I think is the key to a successful Black Series release.

If you're a Chopper/ C1-10P fan, you might also want to check out my review of the Hikari Minis black Chopper.