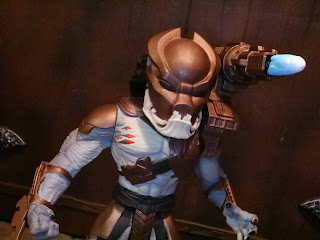 NECA has brought back one of my favorite toylines of all time and I'm absolutely thrilled: They have resurrected Kenner's Aliens and Predator line! Ever since Funko and Super7 started releasing their faux-retro Kenner inspired ReAction figures 5 or 6 years ago I've always wondered who would be the first company to release action figures in the 90s Kenner style, similar to lines like Jurassic Park, Congo, multiple Batman lines, Swamp Thing, Beetlejuice, and more. It turns out it's NECA and they've hit a line I still actively collect. Well, two lines, really, but I'm counting them as one: Aliens and Predator were two different lines, although they crossed over so often that hardly anyone separates them. Ready to see how NECA did with a 1990's Kenner styled Predator? Then let's check out the Berserker Predator after the break... 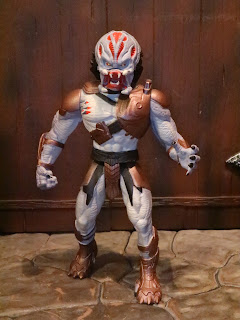 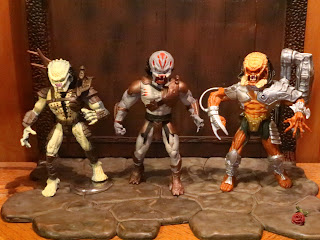 *For this picture I've placed NECA's Berserker Predator in the middle with Kenner's Renegade Predator on the left and the Cracked Tusk Predator on the right. Looking at him mixed in with others, I think you can tell that NECA did one heck of a job capturing the Kenner look and aesthetic. Seriously, if you didn't know Berserker Predator was new could you tell he isn't a Kenner figure? The size, look, and even the feel is pretty accurate. 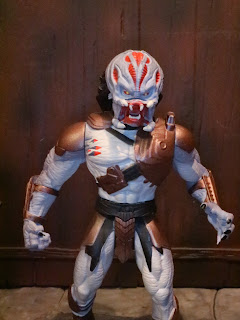 * NECA has made dozens upon dozens of modern Aliens and Predator figures based on the Kenner designs but this is their first attempt at a true Kenner styled figure and I think it's pretty successful. This figure is based on the design of the Berserker Predator from Predators, so it's not a completely new design or anything, but it certainly works. I'd actually love to see NECA release lots of Predators like the Jungle Hunter and City Hunter in the Kenner style. I'll buy them all! The sculpt and paint does a great job of having a nice level of detail, but not feeling too "modern" so as to stand out from the rest of the vintage pack. 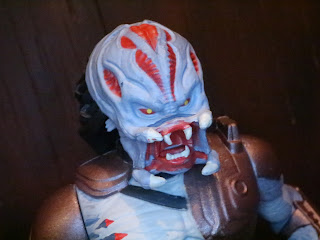 * The headsculpt is great. I love the weird red ridges on the head. It makes me think of Freddy Krueger's skin. The Predator's maw looks great, too with it's outer fans and inner teeth present and accounted for. 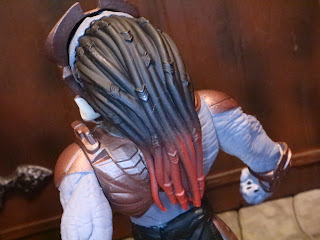 * You've also got some cool dreadlocks on the back. They're dyed red at the bottom for extra Predator styled coolness. 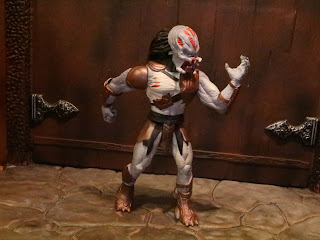 * Like most 1990s Kenner action figures, the Predators still usually only moved at the big 5, so that's what the Berserker Predator has, too: Swivel hips, swivel shoulders, and a swivel head. He stands well on his own but does have a but of an action pose. Heck, he even feels quite a bit like a Kenner figure in hand. Very solid and sturdy. 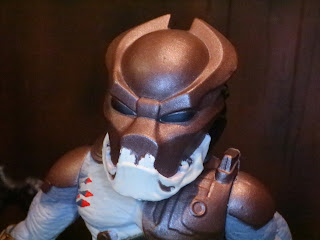 * The Berserker Predator has a great mask. Unlike the vintage Kenner figures, the mask does feature some paint apps, although I like the design here so I'm in favor of that little anachronism. The Berserker's mask features a bone where the jaw would be. It fits on the figure's face very well without any fear of it accidentally slipping off. 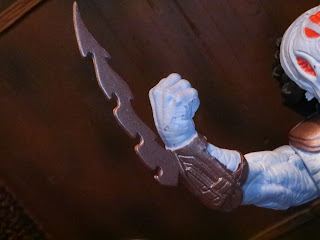 * The wrist blades are a popular part of every Predator and this guy has a wicked looking one. It's the same color as his mask and armor but it's actually a separate piece this slips into his wrist armor. 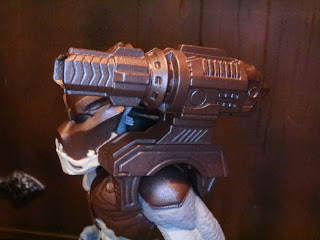 * The Berserker Predator also comes with a massive cannon that fits over his left shoulder (make sure you get his left arm posed just right so it fits). It's a solid sculpt that definitely evokes the classic Kenner feel, too: Lots of detail but still very boxy looking. 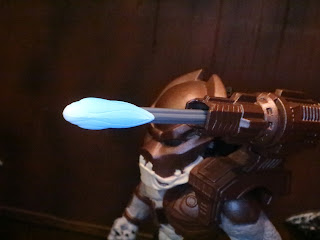 * Kenner (and most other 1990s toymakers) loved spring-loaded missile launchers, so of course the Berserker Predator comes with one. His missile does get a paint app (a blue energy burst) and it fits well inside the cannon. Push the button on top of the cannon and the missile fires nicely towards whatever enemy he's battling today. 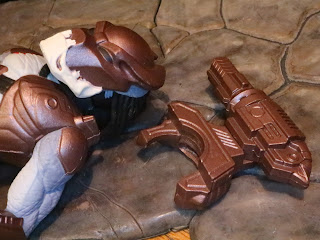 * The cannon will stay on just fine for display but if you're moving the figure around it tends to fall off. It's not held on super tight. 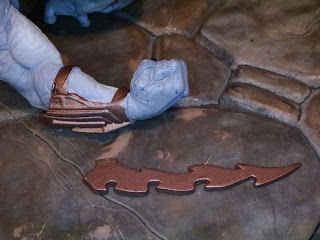 * The wrist blade is also a bit loose. Honestly, I really wish the blade had been non-removable or had been a larger, more Kenner-esque clip on piece. This approach feels like it misses the mark a bit. 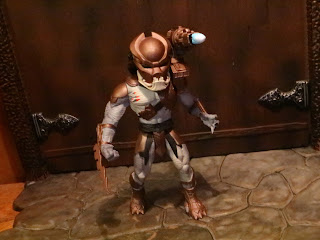 NECA has done a very, very good job with this figure. I do have a few qualms about how the accessories were pulled off, but when it comes to the figure itself NECA nailed it. They really captured the design of a Kenner figure, especially in the paint and level of detail, and I hope they continue on with this line. The Berserker Predator is a Great and a 1/2 figure and he'll fit in perfectly with your Aliens/ Predator collection. I really hope the line continues, giving us more Predators, Aliens, Space Marines, and maybe even Dutch and some of his crew in a Kenner style. I've love to see some of the cancelled design, like the female Predator, redone by NECA as well.


If you're a fan of the Predator, I've also reviewed some other Predators including the ReAction Predator (Thermal Vision), NECA's Jungle Hunter and City Hunter Predator 2 pack, and Kenner's Alien versus Predator 2 pack and Cracked Tusk.