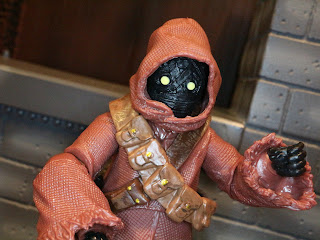 A Jawa was one of the first 12 Star Wars action figures Kenner released in the vintage toyline and they also made it into the Power of the Force 2 within about a year and a half of that lines release. For the Black Series it has taken...nearly four years? Yup! That's either a testament to how expansive the Star Wars Universe has become or key evidence that Hasbro has a really bizarre release schedule for this line. You think that we'd be swimming in Jawas at this point, wouldn't you? Well, we've finally released the first Jawa in the line as part of the 40th Anniversary Collection and it's...kind of mixed, really. I mean, I like the figure as it looks fantastic and has some really nice design detail along with a few fun features. It's also a bit frustrating, too. Hey, it's the action figure of equivalent of Episode II! Let's take a closer look at this little guy after the break, shall we? 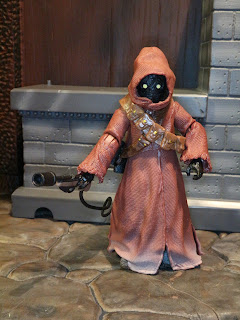 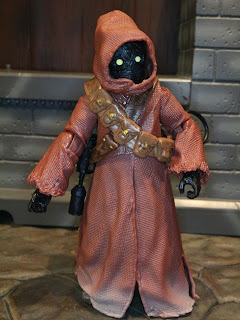 * The decision had to be made whether to go with a sculpted cloak or a soft goods cloak and it seems the winner was a sculpted cloak. Overall I think Hasbro has had good success with using soft goods, but the sculpted cloak here looks good and fits the figure well. The texturing on this guy is excellent, as is the paint work. Yeah, he could look a bit more rough and weathered, but he fits in with everyone else just fine. I like the fine dusting of sand along the hem of his robe, too. It nicely gives him that "fresh out of the Jundland Wastes" look that all of the hipster Jawas are always trying to imitate. The lower legs are wrapped in various strands of cloth, kind of like a Tusken Raider, but it's pretty tough to see underneath the Jawa's robe. 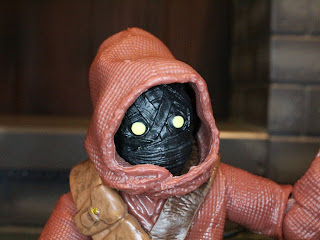 * The headsculpt is excellent. The hood is is a separate piece attached to the head, meaning it both adds depth to the figure's appearance as well as allows for better head movement. The interior looks like it's covered in strips of black cloth (this seems film accurate) and features glowing yellow eyes.

*By the way, I mean that literally: The eyes are yellow and painted with a glow in the dark paint. It's not a very strong glow effect but it is noticeable. 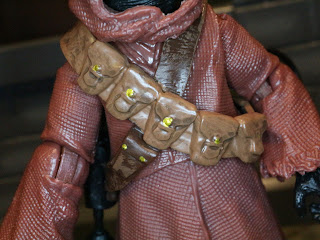 * The Jawas are pretty varied in their appearance, but Hasbro definitely went with a design that is very much a definitive Jawa who still manages to look pretty interesting. The Jawa is sporting dual bandoliers (all one piece), one sporting a row of five pouches and the other two back pouches, one front pouch, and a right hip holster. The paintwork is really nice on this, giving it a worn, leather-like appearance. 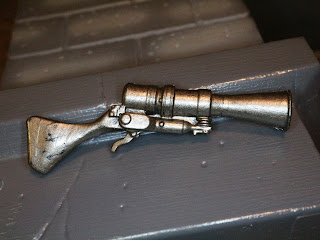 * The Jawa comes with two ion blasters. The first is the model you see on your left. It's the model I always think of first (probably because the POTF2 version included one like it) and it's always been my favorite. The paintwork is nice; it looks rather distressed and rugged. 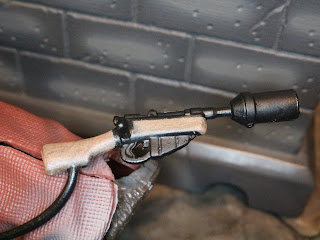 * The second ion rifle looks like the one used to shoot R2-D2. It also has a nice sculpt and a variety of paint applications to call attention to all of the details on it. It is attached to a cord that is attached to a battery pack on the Jawa's bandolier, meaning it is not removable. More on that in a moment. 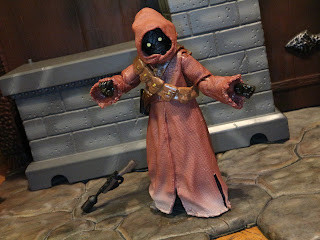 * First things first, I do want to point out that the Jawa's leg articulation is not only hindered by the stiff plastic robe (he has balljointed hips, swivel/hinge knees, and swivel/hinge ankles underneath the robe) but his arm articulation is also pretty rigid. Sadly, it's tough to get him into good firing poses using one of his ionization rifles. Sad Jawa, sad Utinni. 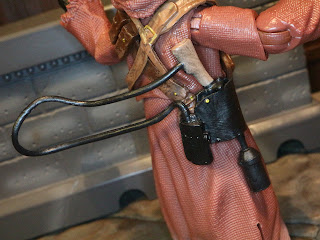 * The back of the bandolier has a battery pack for the attached ionization blaster and a holster to store it in. The holster looks decent, but the fit of the blaster in there is really, really tight. I'm kind of nervous to stick it in and pop it back out considering that the barrel of the ion blaster is a rubbery. It seems like one careless tug might pull the barrel right off. Plus, the hard plastic cord ends up sticking out. A softer cord or even a string would have been preferable. 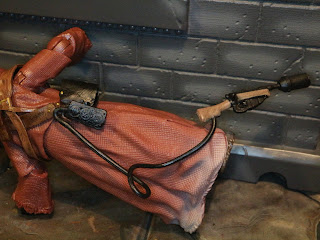 * I really do not like the attached blaster. It might be film accurate, but it definitely gets in the way. Surely there's no reason that the battery pack could not have been removable. Then this wouldn't have been an issue at all. 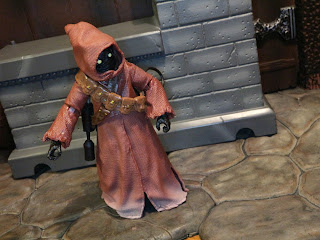 * Whenever you get a smaller figure, there's always part of you that feels a bit short changed. I mean, the Jawa costs the same price as any other full sized figure. While I wouldn't expect to get another full sized Jawa, a smaller droid such as a mouse droid or even a few other accessories such as the droid caller would have helped to make the package feel a bit fuller. I do believe this is the first modern Jawa Hasbro has sold by itself other than the 12 inch POTF 2 figure, which was part of a special subset of smaller, less expensive figures like Yoda and R2-D2. 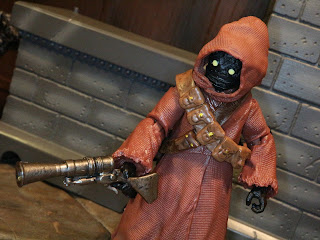 The Jawa is a Good figure but, considering Hasbro purchased Kenner, they've essentially making Jawas for 40 years at this point. I like what they've done, but I wanted to be wowed. The articulation limitations and the permanently attached ion rifle are frustrating, and the last thing I want from my action figures is frustration. The Jawa should have been a home run of a figure. Instead, he feels very phoned in. A droid companion? Light up eyes? Uncle Owen and Aunt Beru's charred corpses? Any of these would have shown that Hasbro was going the extra mile for this line.


This is actually the first Jawa figure I've reviewed on Action Figure Barbecue. If you're looking for more figures from the 40th Anniversary Collection, check out the following: