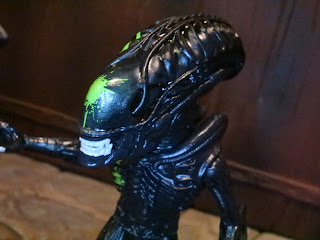 Ready for another look at a mighty cool stocking stuffer? Let's check out a really cool Xenomorph Action Vinyl from The Loyal Subjects! Recently The Loyal Subjects sent me some Action Vinyls so I'm having a fun time reviewing them. I reviewed lots of the Masters of the Universe Action Vinyls earlier this year, but now I'm getting the chance to check out a few of their other properties, such as Game of Thrones and Aliens. I'm definitely an Aliens fan and getting a Xenomorph covered in green, acidic, alien blood is definitely a reason to celebrate. The Aliens series has quite a few figures in it with plenty of Xenomorph variants. Let's take a peak at this one after the break... 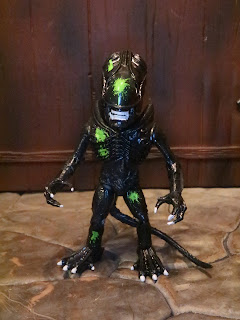 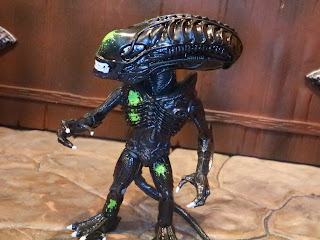 * The Xenomorph is one of the most impressive looking renditions of an alien that I've seen. Despite being miniaturized and maybe just a wee bit caricatured, this is still a very faithful, very detailed sculpt. The black color looks excellent (yes, the Xenomorphs in Aliens were actually brown but looked blue, but I still think I like the black look best), especially splattered with green blood. It's a great look! 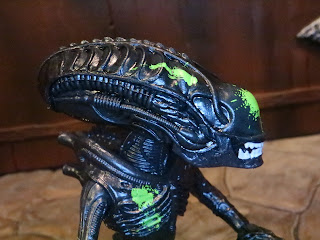 * The headsculpt is also perfect. I love the elongated cranium. This is till one heck of a design, isn't it? The Loyal Subjects does some incredible sculpting. You may not always recognize it since so much of their work is caricatured, but this figure really shows what they're capable of. 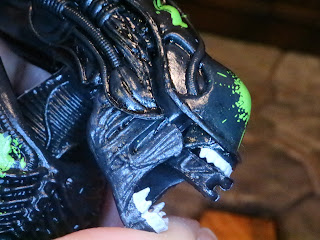 * The jaw is hinged! An not only is it hinged but it features a slide out second mouth inside. Pull down the hinged jaw and the inner mouth slides out automatically. How cool! I've always loved the Kenner Aliens line and this guy reminds me of those toys. 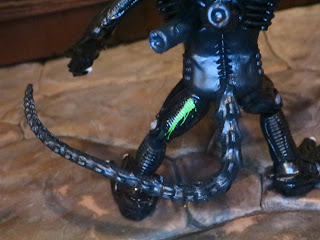 * The Xenomorph's tail is bendable! That's a pretty cool "action" feature. How crazy is it that this little guy has two action features for a figure under 4 inches? I'm loving it! 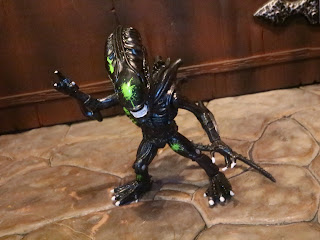 * The Xenomorph has some great articulation. Not every joint has a huge range of motion but you can definitely have fun posing this little creature. These thinks make excellent desktop toys. Seriously, who doesn't want to sit around and play with an alien during that dull webinar you have to sit through?  You get extra points if you sneak him into the view of your webcam to terrorize other participants! 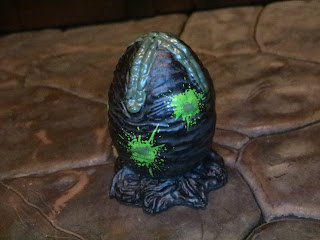 * The Xenomorph comes with an egg, which is a pretty cool accessory. It's cool on its own, it's cool when posed with the figure, and it actually even looks good with the old Kenner Aliens stuff. Some of the Action Vinyls come with open eggs and some come with closed eggs, so you get some variety if you amass a small army of Xenomorphs. 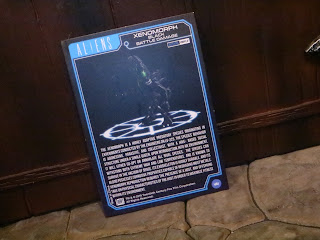 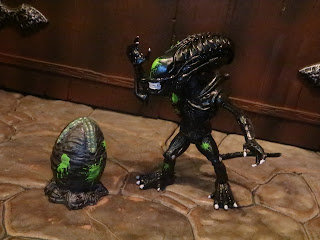 This guy is Epic. Seriously, he's one of the coolest Xenomorph toys I've owned. Yeah, he's small, but so what? This little bugger is as fearsome as they come. He's got an excellent sculpt, a cool blood splattered appearance, and a great accessory. What more could you want? Whether you're an Aliens fan picking up another piece for your collection or your shopping for that hard to buy for person who would appreciate a Xenomorph in their stocking, this is a hit. The Black Battle Damage Xenomorph comes packed 1 in 48, or one in every four cases, so he might be a tougher find. Shop around using The Loyal Subjects' a retailer list.


For more Xenomorphs, check out my reviews of the M.U.S.C.L.E. Xenomorph from Alien Pack A, the Attack Alien from Pack C, the Xenomorph Warrior from Aliens Pack A, the Alien Warrior (with open mouth) from Pack B, and the Alien Warrior (Crouching) from Pack C, the ReAction Alien (with Metallic Flesh), NECA's Xenomorph Warrior, the standard Xenomorph from Kenner's Alien versus Predator 2 pack as well as the Bull Alien, Gorilla Alien, and Scorpion Alien, and the Micro Machines Alien Transforming Playset which is loaded with Xenomorphs.

The subject of this review was provided by The Loyal Subjects.
Posted by Barbecue17 at 12/05/2019