Action Figure Review: Evil Seed from Masters of the Universe by Super7 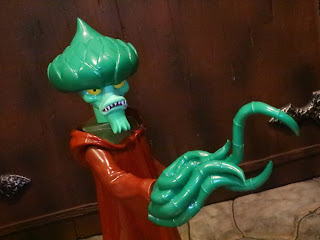 It's been a few weeks since I last reviewed one of the figures from Super7's latest series of Masters of the Universe figures but I'm back and today I'm checking out Evil Seed! Evil Seed is one of the most memorable of the "villain of the week" characters from the Filmation animated series although he was never granted a toy in the vintage toyline. That wasn't unusual, though, as very few of the Filmation created characters made their way into the vintage MOTU toyline. Evil Seed also appeared in the 200x/ MYP cartoon series, but again he was never turned into a toy there, either. It wasn't until 2015 in Masters of the Universe classics that Evil Seed got a toy made. That one was based on his 200x appearance but shortly afterwards he got a figure based on his Filmation appearance in the Club Grayskull/ He-Man and the Masters of the Universe toyline. What about fans of the vintage toyline, though? When would they get their Evil Seed. Now. Now they have one. Super7 has mostly remade vintage figures in a Filmation style but the newest series does offer up a couple of characters with no toy counterpart in the vintage line which are pretty exciting. Let's check out this vintage styled Evil Seed after the break... 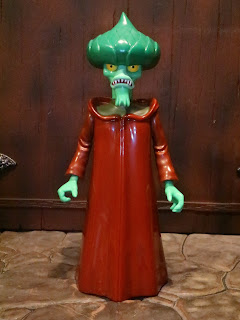 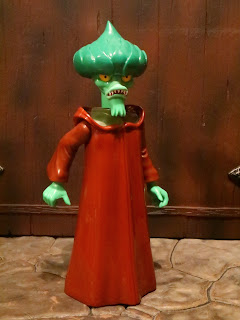 * Evil Seed looks really, really different from a standard MOTU figure but he's a dead ringer for the Filmation character. At first I was kind of wondering if this is any bit like how Evil Seed might have looked if Mattel had made him back in the 1980s but after thinking about characters like Gwildor and Orko, I do see a vintage precedent for Evil Seed's body design. He's very much a "salt shaker" figure (referring to the solid body with no actual legs), though he is very tall and towers over most vintage figures. Evil Seed's a creepy, lanky guy, though, so it works for him. He's got a great paintjob and looks like he just crawled his way out of an animation cel. 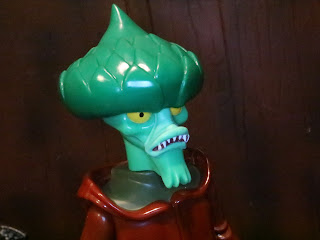 * The headsculpt is excellent. His head definitely looks like an artichoke and he has a great expression! This is some top notch work. Honestly, it's one of the best Filmation styled sculpts Super7 has released. 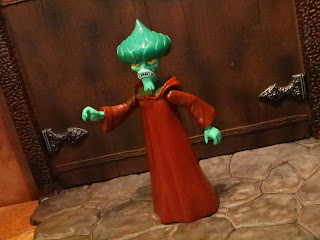 * Evil Seed doesn't have much articulation, just a swivel neck, swivel shoulders, and swivel wrists, but what he does have reminds me a lot of the vintage figures like Gwildor, Ram Man, and Orko. Heck, he's really built very much like Gwildor, which isn't a bad thing at all in my book. 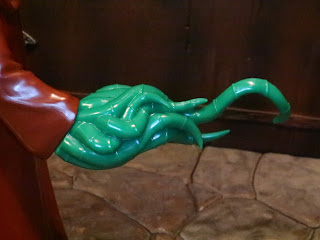 * Would the vintage Evil Seed, had he existed, have had an action feature? Probably. This guy doesn't have a true action feature but he does have a cluster of vines (the package calls it a "growing root") which can fit over his hand. It's a cool accessory and the figure looks great sporting it. 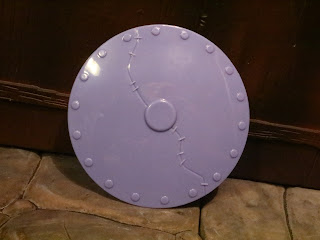 * Evil Seed also comes with a shield which, I believe, is only seen briefly in the episode "Evil Seed." It's a cool extra and looks very MOTUish, so give it to Evil Seed, let someone else have it, or just use it as background deco. It's big enough to use in MOTUC, too. 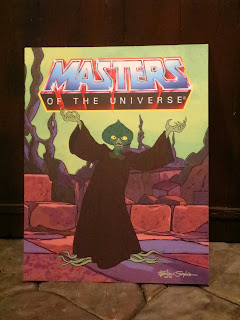 * I still like the decision to include art cards with these figures. They kind of mimic the look of the minicomics in the vintage packaging although they're still just a simple cardstock art print. On the front is a really cool image of Evil Seed from Emiliano Santalucia while the back features two images of the evolution of the character in the cartoon. The first cartoon design is crazy! 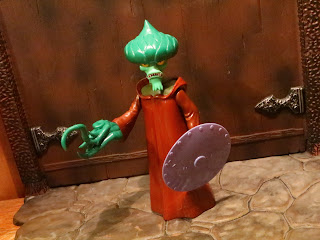 I'm really liking Evil Seed. I love when we actually get a figure that fits in with an older toyline, expanding the characters beyond their original roster, and Evil Seed is a great example of that. Like Super7's He-Ro and Eldor, Evil Seed does add another figure to the vintage MOTU line for folks willing to give him a chance. He's a Great and a 1/2 figure and really one of the most fun figures Super7 has thus far put out in this line. A great sculpt combined with some fun accessories definitely makes for a winner.

If you're a fan of Evil Seed, check out my review of the MOTUC Evil Seed.