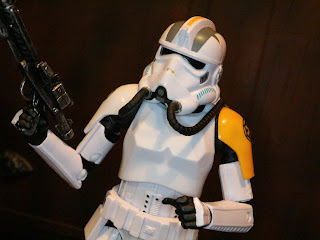 Yesterday I was surprised by a package on my doorstep that arrived from GameStop. Opening it up I was pleased to find the Imperial Jumptrooper, a new GameStop exclusive Star Wars: The Black Series Phase III action figure. I preordered this sometime last year through GameStop's website and they're now shipping out and showing up in stores. Originally an Expanded Universe concept first appearing in the insanely fun Super Star Wars: The Empire Strikes Back video game for Super Nintendo (that was a great series of games, wasn't it?) the Imperial Jumptroopers have entered into the New Canon through appearances in Star Wars: Commander and Star Wars Battlefront. This version is based off of the design seen in Star Wars: Rebels, however, which is a smart move. Rebels always had excellent character and trooper designs. While the Jumptrooper might not be a must have character, it is a very fun figure that's worth checking out. Let's see how high this guy flies after the break... 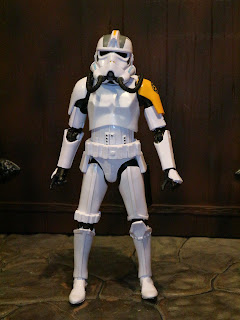 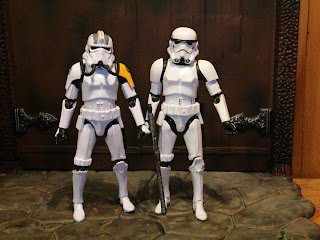 
* Hasbro has gotten their mileage from the basic Stormtrooper body and that's what is utilized again here for most of the Imperial Jumptrooper. The basic body is shared between the Jumptrooper on the left and the standard Stormtrooper on the right. The back is different, though, as there is a hole for the jetpack to plug into. 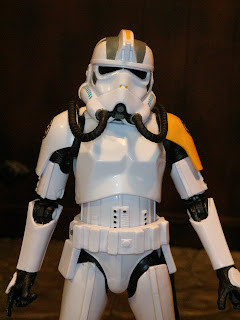 * The Stormtrooper body is excellent, as usual, with the same sparse but crisp paint applications you'd expect. There's a bit more color here, though, and the orange details on the helmet and left shoulder pauldron really go a long ways to making this guy feel quite unique. 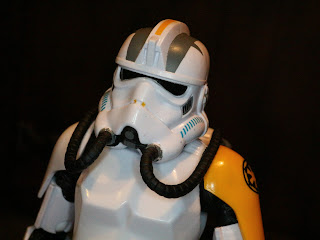 * I love the helmet design. It's kind of reminds me of a mix between the TIE Pilot and the AT-AT Pilot. The lens is one long piece, rather than being two separate eyes, and there are some nice orange and gray details on the helmet. The helmet has a "Mohawk" like the aforementioned troops although the Jumptrooper's is slimmer. The oxygen tubes running out of the helmet connect around to the jetpack on the back (which I'll cover shortly). 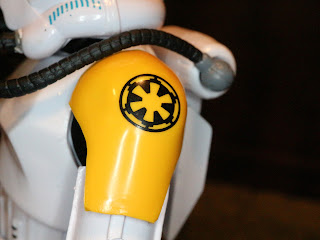 * The Jumptrooper is sporting an Imperial cog on both shoulders but the left should pauldron is notable for its bright orange color. Not only does it add a little bit of visual flair to break up the white and black but it's also reminiscent of the pauldrons sported by the Sandtroopers. The printing on both insignias is really extremely neat and clean! 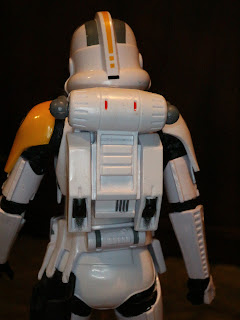 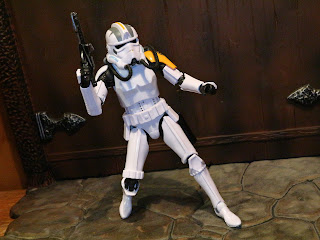 * The Jumptrooper's articulation is the same as nearly any other Stormtrooper in the line except the plastic quality on the joints, particularly the elbows and knees, is much more solid. This guy can hold up to some solid play, no doubt. 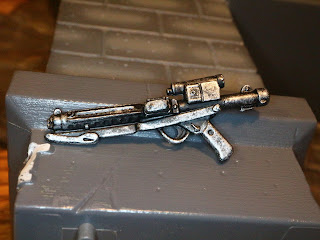 * We've seen the E-11 so many times in this line, although you can't blame Hasbro since it is the default Imperial weapon. This version has some very heavy drybrush effects to give it a weathered appearance for that rugged look. Like always, it easily fits into the holster attached to the figure's belt. 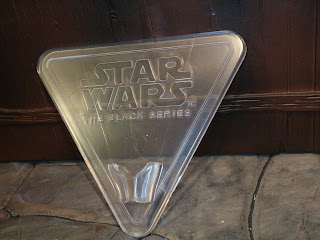 * Interestingly this figure also comes with a translucent display stand. It's triangular, like a tortilla chip, and has a small wedge that the foot of a figure can be placed in. It's a little awkward but it does work. The Jumptrooper's boot is a little too wide to work as effectively as it probably should but it can still function. Personally, I'd love to see Hasbro include these with all upcoming figures. 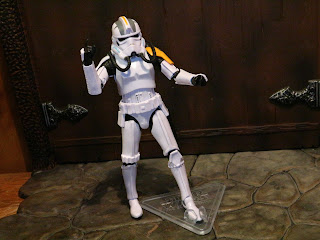 While the Imperial Jumptrooper might cost a dollar or two more than the average retail Star Wars: The Black Series figure due to GameStop's $22.99 price tag, the Jumptrooper is a really nice figure. The Stromtrooper body has been around the block more than once but it's still a well made base and Hasbro keeps improving the plastic quality. The helmet, color highlights, removable jetpack, and display stand do give this figure a lot of nice features. It's a Great and a 1/2 figure and well worth checking out. If you're a troop builder or a fan of Rebels, you'll probably enjoy having this guy around, if only to keep Boba Fett's ego in check.