Action Figure Review: Frankenghost from The Worst by Super7 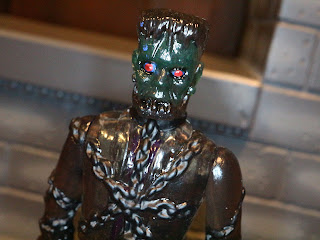 It's taken me a while but I'm finally getting around to reviewing the last figure in series 2 of The Worst: Frankenghost! Initially Frankenghost was the figure I was most looking forward to in this series as he's just a great blend of coolness with equal parts Frankenstein and poltergeist mixed together with translucent plastic and eerie red eyes. Having him in hand I'm not sure I like him as much as I thought I would but I still really do like him. The Worst is definitely one of the coolest toylines Super7 is putting out and I hope we see some cool repaints of the Series 2 crew and an even crazier Series 3 in the future. For now, let's check out Frankenghost after the break... 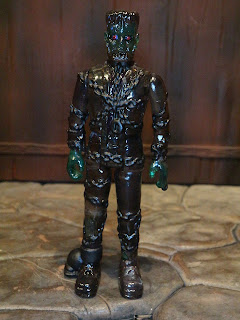 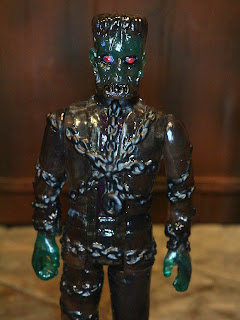 
* First things first, you gotta recognize that Frankenghost is molded in translucent plastic. Most of the figure is molded in a smoky plastic while the head and hands are translucent green. The body clearly has a lot of intricate sculpting here since Frankenghost is wearing a traditional Frankenstein's monster suit while wrapped in chains but it is a bit harder to notice with the darker colors. Holding him up to some light really helps show off the sculpt. 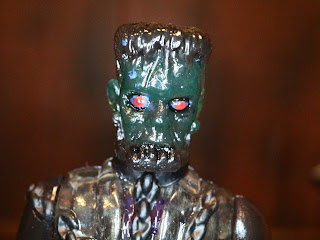 * The headsculpt is creepy as well. Again, it's tough to see but the detail is there and those eerie red eyes really seal the deal on this guy. Does he have a metal jaw? It looks like it to me. 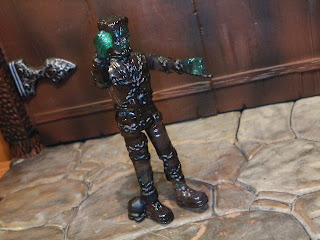 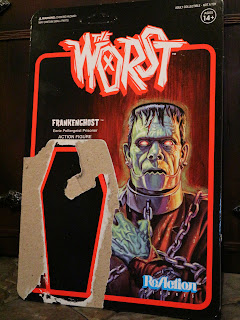 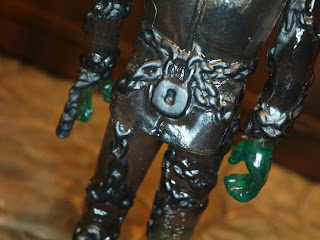 * I love the little locks and chains all over this guy. He's kind of got the traditional ghost/ Jacob Marley thing going on, doesn't he? Or the Ghost of the Alamo. 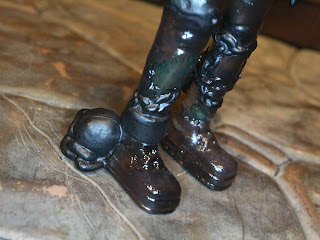 * I like the ball and chain that Frankenghost is toting but I wish it were a separate accessory rather than a permanently sculpted part of the figure's foot. 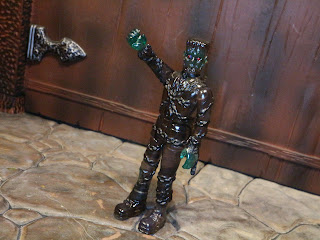 Frankenghost is a cool figure and I have no doubt that he'll be the favorite figure from The Worst series 2 for many folks. That being said, I do wish his details were a bit more visible, possibly through using some lighter colored plastic for his torso with darker paint for the chains. Having his ball and chain as a separate accessory would have been welcome, too. Still I love the creativity here and there is no doubt that Frankenghost has a lot of shelf presence. This is a Good and a 1/2 figure and another cool addition to the line. I'm really curious to see what future repaints of this guy Super7 releases in the future.