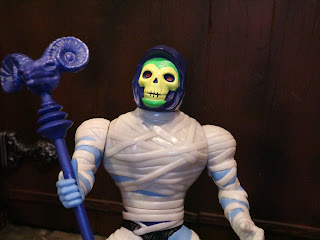 Happy Masters of the Universe Day 2019! I've got a second review for you today and this time it's for a rather unusual MOTU figure: Possessed Skeletor! Remember this one from your childhood? Nope? That's because this one was released by Super7 in 2017 to tie in to the release of the Masters of the Universe: The Curse of the Three terrors cartoon. If you're not familiar with it, The Curse of the Three Terrors is a cartoon done in the style of the Filmation animated series that uses the original theme, music, and some of the backgrounds. Directed by Brian Flynn and featuring the voice talents of Alan Oppenheimer, this short cartoon is a real treat if you haven't seen it before. It's well done, quite funny, and absolutely charming. It's nice to see Super7 doing things that move the brand forward, even if only in small ways. Possessed Skeletor is one of four figures based on this cartoon and it depicts Skeletor after he has been possessed by the spirit of King Heltor, and ancient evil being who Skeletor awakens by mistake. Let's check out this vintage styled figure after the break... 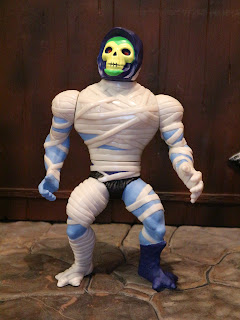 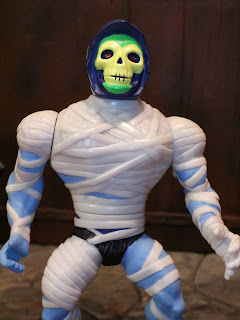 * I know we've got lots of faux retro lines these days but I hesitate to call this a faux retro line as it really is continuing the vintage MOTU line in the same style. It's an interesting variant for Skeltor that depicts Skeletor's classic appearance now covered by the mummy-like wrappings of the mysterious King Heltor. It is fairly accurate to the cartoon but also makes for a Skeletor variant that fits in well with the classic line. It also kind of reminds me of Wrap Trap, which is always a plus. The sculpt on the wrappings is quite nice and detailed. Skeletor "feels" like a vintage figure; he's not artificially made less impressive nor does anything about his sculpting feel too modern, either. 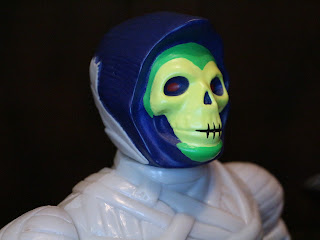 * The headsculpt looks and feels very accurate to a vintage MOTU headsculpt. It's not accurate to the show (more on that in a minute) but it's really cool as not only does it look like a vintage Skeletor but it actually has the small difference of having the wrappings winding around the back of it. 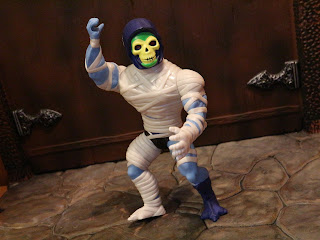 * Overall Skeletor is articulated like a vintage MOTU figure. The upper body features swivel joints while the legs are attached via black rubber bands. The rubber bands are thicker than a standard rubber band but they seem to be thinner than the rubber bands used in the vintage line. He feels fairly durable, though, and should easily stand up to handling by a collector. 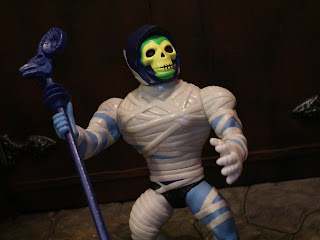 * Like many of the vintage figures Possessed Skeletor features a spring action waist. Swivel his waist and he'll spring back to offer up a powerful punch or a slam of his Havoc Staff. I really like that Super7 worked a vintage styled action feature in here as that's something that's been largely absent from MOTU since the 200x era. 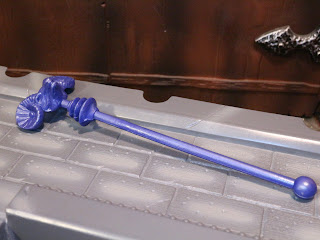 * Skeletor of course comes with his Havoc Staff. It's a cool accessory that definitely resembles the vintage toy's weapon. Some of you will be relieved to know, however, that the Havoc Staff does have a Super7 stamp on the handle, so it won't easily pass for a vintage accessory. 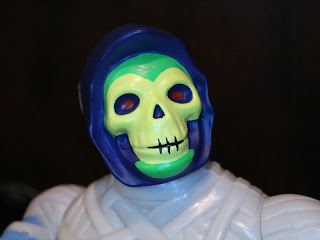 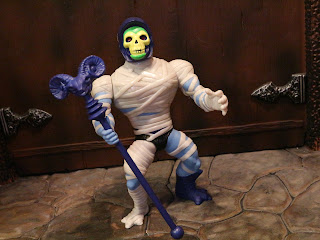 While I have been critical of some of Super7's decisions with the MOTUC and Club Grayskull line, overall I love their work with the property. They're creative, have excellent presentation, and they put out some fun product. Possessed Skeletor is a really good figure in the style of the vintage line from a really fun project. If you haven't watched it yet, The Curse of the Three Terrors is definitely worth a watch if you're a fan of the Filmation series. It's always cool to see anything that moves the brand forward, even if simply introducing new versions of classic characters. This is a Good!