Action Figure Review: Fisto from He-Man and the Masters of the Universe by Super7 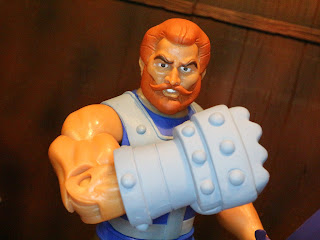 I recently received Super7's third series of He-Man and the Masters of the Universe/ Club Grayskull action figures and today is the first of four reviews covering the figures in the series. Today I'm checking out Fisto, the Heroic Master of Hand to Hand Combat who fist appeared in the 1984 series of MOTU action figures. Fisto also appeared in four episodes of the Filmation cartoon series and that's where the inspiration for this figure comes from. Masters of the Universe is a property where I have lots of favorite characters and Fisto is easily another of my favorites. I've kind of been working on growing a beard and getting into shape to cosplay him at a comic book convention this summer. Anyways, while Fisto wasn't a major part of the Filmation cartoon he is a popular character so he was a good choice for the Filmation based line. His Masters of the Universe Classics figure was also notoriously tough to get a hold of (some folks received the wrong figure for their subscription that month) so I'm sure there are still folks who just want a Fisto for their collections. Well, here he is! Let's check him out after the break... 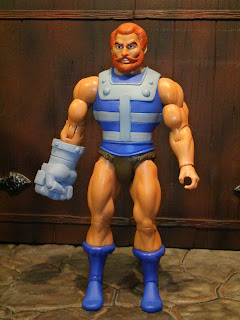 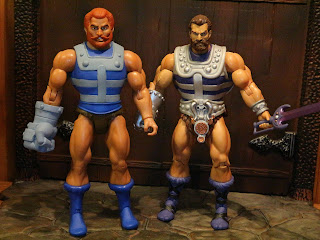 * On the left is the Club Grayskull/ Filmation inspired Fisto while the MOTUC Fisto is on the right. While the arms and legs might seem very similar everything else is noticeable different even those these are clearly the same character. The Club Grayskull features flatter, more basic colors and less fine detail all over. 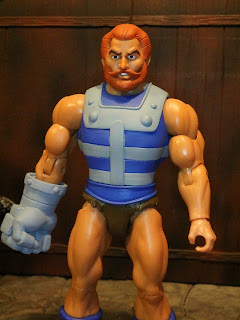 
* In short, Super7 does a fairly nice job of capturing the style of the Filmation cartoons in this series. Fisto features simple, bold colors and a simple look that captures the cel shaded animation of the cartoon. Unlike many other MOTUC and Club Grayskull figures, Fisto's armor is not removable. It instead is a sculpted part of the figure's torso. While it negatives the "mix and match" appeal of Mattel's MOTUC, it definitely creates a sleeker looking figure for Fisto. 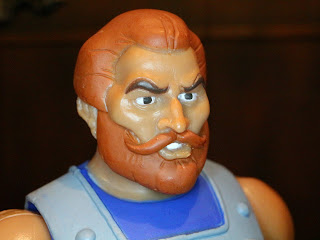 * The headsculpt is great and has a lot of character to it. Fisto always seemed like kind of crazy guy with that giant beard and mustache and his unusual tinny sounding voice. He looks ready to pounce down out of a tree in the woods upon some unsuspecting Evil Warriors! 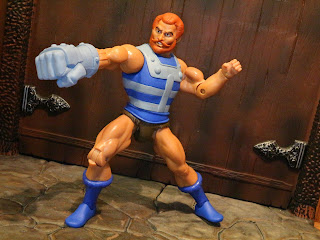 * While Super7 has improved the articulation on these figures overall by including swivel/hinge ankles and swivel/hinge wrists, Fisto does have a bit more limited articulation than some. His sculpted chest armor means his chest has no articulation while his right wrist is just a swivel. That's OK, though, as he's still rather fun to play with and pose. 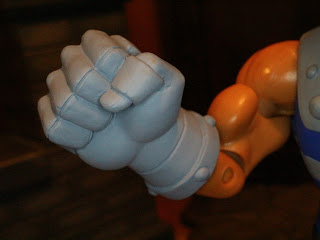 * Fisto's massive fist looks pretty slick. It's completely different than the MOTUC Fisto's fist and this features its own design based off of the Filmation character's appearance. 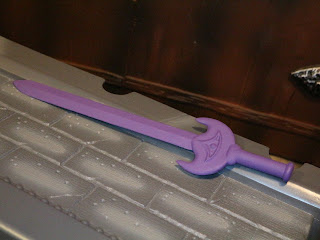 * Fisto includes his purple sword. It's a solid accessory with an actual sharper point. Seriously, you could stab someone with this! 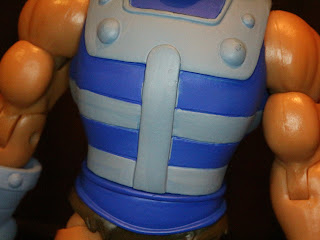 * Some of the paintwork on Fisto's armor leaves a little to be desired. You can see purplish streaks underneath the grey armor slats on the chest armor, particularly on the middle grey slats. 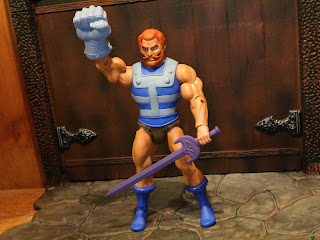 Fisto is a decent figure for the Club Grayskull/ He-Man and the Masters of the Universe line. Unfortunately, he's $35 dollars, like the other figures in the series, and thus comes up feeling a bit light for the amount of money. Super7 has been pretty good about including extras with most of these releases, even some various Filmation artifacts, to add some value. As it stands, Fisto definitely feels very light for the money,. He's kind of an Eh and a 1/2 figure. If you're a hardcore MOTU fun who loves Filmation and this line you'll probably want him. Otherwise, there are definitely more interesting MOTU figures out there with more value. I'll check more out soon, so stay tuned!


If you're a Fisto fan, check out my review of the mini Fisto from the M.U.S.C.L.E. Masters of the Universe #1 set by Super7.

For more figures from He-Man and the Masters of the Universe check out the following:
Prince Adam (Laughing)
Tung Lashor
Posted by Barbecue17 at 4/05/2019