MOTU Day 2019: Scare Glow from Masters of the Universe ReAction by Super7 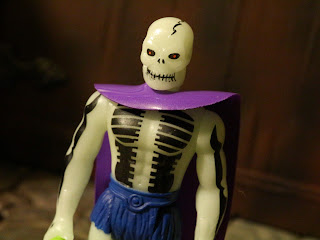 Happy Masters of the Universe Day 2019! It's been a few years since I've done much for the holiday bit today I've got some special MOTU reviews lined up for you. First up I'm going to be checking out Scare Glow, the Evil Ghost of Skeletor! Scare Glow is a a pretty interesting character in MOTU lore for a few reasons. First, he's a glow in the dark skeleton in a purple cape. That's just wicked cool. Second, he's one of the rarest figures in the vintage line. As part of the last full series of figures Scare Glow was made mostly using reused parts to get out a cost-saving series of figures. Now he's insanely expensive! Third, his title as the "Evil Ghost of Skeletor" has definitely been the source of much speculation as some folks wonder if the original intention of the figure was for Scare Glow to be the spirit of a deceased Skeletor rather than an evil spirit in service to Skeletor. While all media since then has portrayed Scare Glow as a minion of Skeletor, sometimes the original intentions of the toyline were never reflected in the media. Fourth, Scare Glow is interesting as he definitely has had a surge in popularity over the past decade or so. He was released during the first full year of Masters of the Universe Classics and is also being released in the next series of the Mega Construx figures, even before typical A-list villains like Tri-Klops, Mer-Man, and Trap Jaw. Super7 has of course also included Scare Glow as part of the latest series of new ReAction figures so we're checking him and his eerie glow after the break... 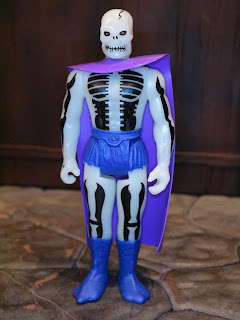 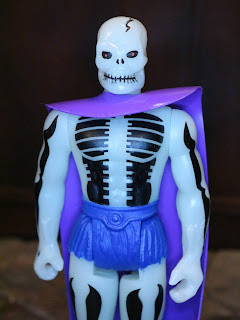 
* Super7 did an excellent job translating Scare Glow into the ReAction style. The colors, design, and even the printing of the "bones" on the body are accurate to the vintage figure. While there are lots of reused parts, you wouldn't know it just by looking at Scare Glow at a glance. He seems highly unique, a tribute to the excellent character design of the vintage toy. 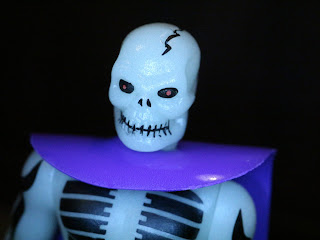 * The portrait is excellent. I love seeing creepy stuff like this rendered in the vintage Kenner style of the ReAction line. The eyes, skeletal grin, and crack across his skull look really crisp and clear. 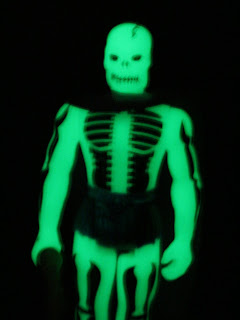 * Does Scare Glow still possess his eerie glow that frightens enemies? You better believe it! The glow on this guy is exceptional! It's very strong with a lovely green hue to it! I'm loving this guy! If you're a glow in the dark fan you'll love this guy. 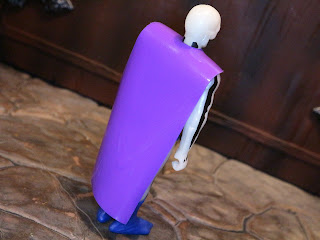 * Scare Glow's cape is made of a thicker vinyl that seems fairly durable. It's not removable but would you really deprive this guy of his cape? 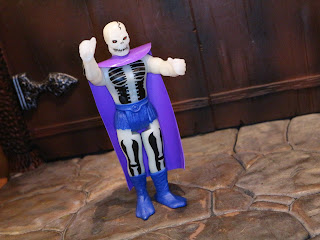 *  If you've ever picked up a retro figure like this, you know what to expect: 5 points of articulation and all swivel joints. Scare Glow feels quite well made and sturdy and definitely of a better quality than some of the earlier ReAction figures that Funko put out. Super7 has been very consistent in the quality of their ReAction lines over the past couple of years. 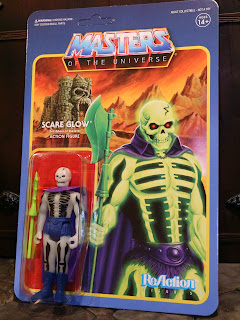 * The card art on most ReAction figures released by Super7 is beautiful and their Masters of the Universe line is no exception. Scare Glow features a beautiful illustration of the character by Jason Edmiston. I want Jason Edmistion to come paint this on the side of a van for me! It's incredible! To preserve the card I actually made a slit in the top of the blister so I can slide the figure in and out. It work great and allows the figure to be displayed inside and outside of the card. I've got mine hanging on a metal pegboard similar to what you'd see in a retail store! 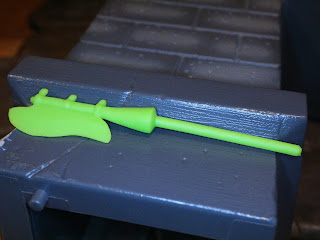 * Last, and certainly not least, Scare Glow comes with his Scythe of Doom. It's a solid green, like most versions of the vintage figure, and it looks pretty cool. He holds it quite nicely as well. I wonder if Super7 will ever do a vintage Weapons Rack in the ReAction line? 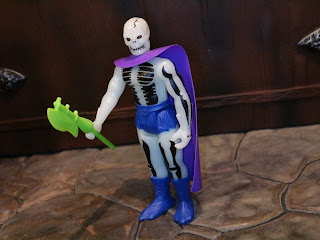 Scare Glow is probably my favorite ReAction figure thus far. While I know that not everyone likes this style of action figure (it is an odd fit for MOTU) the presentation on these is incredible. The figure looks great and the artwork really brings the character to life, just like some of the best art from the packaging on the vintage toyline, too! Considering that he glows in the dark too I have no choice but to give Scare Glow an Epic. This is easily one of the best faux vintage I own. Check this guy out if you're a fan! He's spooky and cool!

If you're a fan of Scare Glow, check out my review of the Masters of the Universe Classics Scare Glow as well!

For more Masters of the Universe ReAction figures check out the following:
Evil-Lyn
Faker
Mekaneck
Orko
Ram Man
Posted by Barbecue17 at 4/28/2019