Action Figure Review: Faker from Masters of the Universe ReAction by Super7 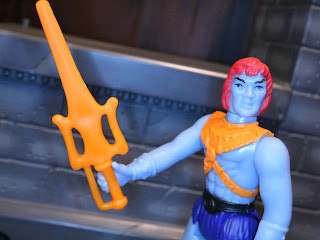 Today I'm checking out a very classic evil twin who is part of the newest series of Super7's Masters of the Universe Classics figures: It's Faker! I love Faker. Evil twins are always a fun (though) usually silly trope in fiction but Faker is one of the best because he so clearly doesn't look like He-Man. He's blue with red hair. And He-Man isn't. While the Filmation Faker made more sense since he was a magical creation that pretty much looked like He-Man, the toy Faker was clearly robotic in nature due to the title on his card (Evil Robot of Skeletor) and the electronic panel on his chest. A number of years ago I started writing my own Masters of the Universe stories based on the MOTUC bios for fun and here's my take on Faker: While based on an experimental android created by Man-At-Arms, Skeletor got his hands on it and used evil magic to create an evil clone of He-Man utilizing some of He-Man's blood and tissue left on the evil half of the power sword after a previous battle. Some of Skeletor's blood found its way into the mix, though, leading to Faker being a magic clone on an android base body that took on the characteristics of both He-Man and Skeletor. That's a pretty cool origin, right? Now let's check out this faux vintage figure of Faker after the break... 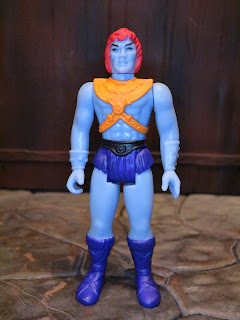 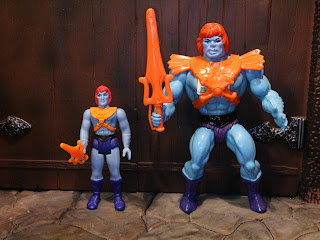 
* Here's a quick comparison of Super7's faux vintage Faker (left) and the real vintage Faker (on the right). Wow Super7 is pretty faithful in translating the details onto the Kenner styled body the difference in the aesthetics of the design is huge. How crazy ripped a MOTU figure would have appeared next to a Star Wars figure, right? 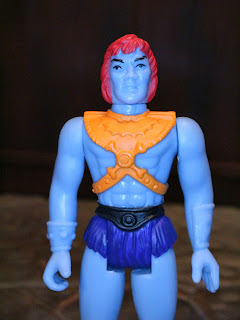 
* While I haven't reviewed any of those figures, It's pretty clear that Faker is simply an amalgamation of the Skeletor torso with He-Man's limbs and head. That works, though, as that's pretty close to what the vintage MOTU figures did by mixing and matching body parts. The paintwork is nice and clean here and does a nice job of capturing the late 70s/ early 80s style. 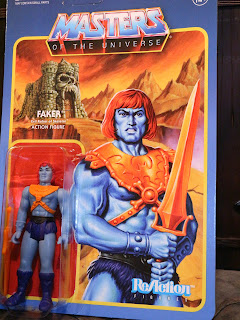 * The card art on most ReAction figures released by Super7 is beautiful and their Masters of the Universe line is no exception. Faker features a beautiful illustration of the character by Jason Edmiston. To preserve the card I actually made a slit in the top of the blister so I can slide the figure in and out. It work great and allows the figure to be displayed inside and outside of the card. I've got mine hanging on a metal pegboard similar to what you'd see in a retail store! 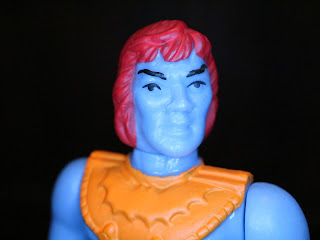 * At first I wasn't sold on the headsculpt after some consideration I like it. It does look like the vintage He-Man headsculpt if you were translating it into the Kenner style. The paintwork is pretty clean for the size and while simple, it works. 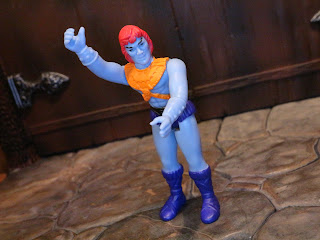 *  If you've ever picked up a retro figure like this, you know what to expect: 5 points of articulation and all swivel joints. Faker feels quite well made and sturdy and definitely of a better quality than some of the earlier ReAction figures that Funko put out. Super7 has been very consistent in the quality of their ReAction lines over the past couple of years. 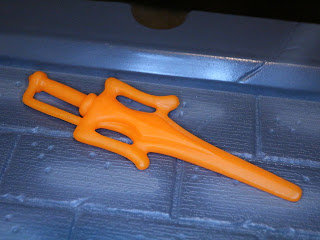 * Faker comes with an orange copy of the Power Sword, which I'm assuming is the same as the sword that came with He-Man. It's a bit oversized but it matches the vintage look well and fits in Faker's right hand snugly. 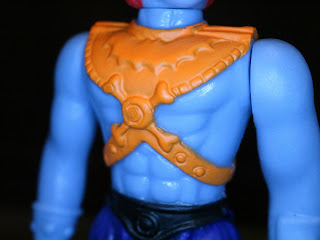 * I gotta admit I'm a bit disappointed that Faker doesn't have his robotic chest piece poking out from under his armor. I know that he's reusing the Skeletor torso and that the vintage figure simply used a sticker underneath the armor, so I'm not sure how things would have worked. Maybe a tampographic stamp on both sides of his chest? 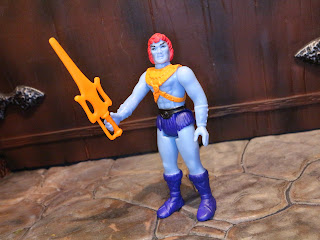 The Masters of the Universe ReAction figures certainly aren't the most impressive MOTU figures out there but when you factor in the colors, the beautiful packaging, and the odd alternate history feel of the line they are really, really fun to collect. Faker is a Good and a 1/2 figure that makes for a fun and slightly unusual MOTU collectible. I always find Faker to be one of the most visually appealing characters in the franchise and the ReAction version manages to be just as slick looking.


For more Faker reviews I've also reviewed the M.U.S.C.L.E. Faker from the Series 3 Pack C, the Ultimates He-Man (which came with a Filmation Faker head), the Mega Construx Faker from the Battle for Eternia Collection, and the VYNL Faker.

For more Masters of the Universe ReAction figures check out of the following:
Evil-Lyn