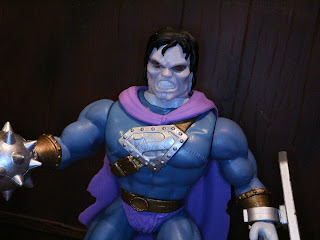 I just got my Pile of Loot from Big Bad Toy Store and inside of it was series 2 of Funko's DC Primal Age toyline from Funko. I really enjoyed series one and series 2 looks to add to the fun. First up from series 2 is Bizarro. Let me tall you that while this is supposed to be a faux vintage styled Bizarro based on the aesthetics of the vintage Masters of the Universe line and it's many imitators, this is perhaps the creepiest looking toy of the character I've ever seen. While He-Man had Faker to contend with, in DC Primal Age Superman gets Bizarro. Fitting, right? Let's check out the fearsome opposite of Superman after the break... 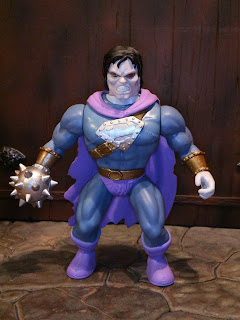 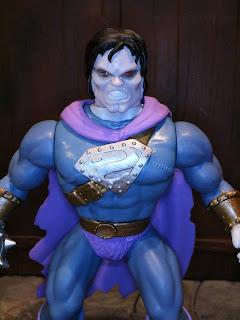 
* Bizarro is a very cool looking figure. While he's clad in the typical Superman styled outfit the colors are slightly different with darker blue and purple. He also has some stitching across the chest area and a large reversed "S" logo strapped to his chest. The logo isn't removable but it does appear to be a separate piece glued on to the figure. The "S" looks incredible as it's hanging slightly askew and looks like it has been created similar to an old piece of armor. 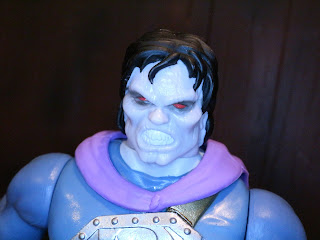 * The headsculpt is really creepy. Bizarro is typically not handsome but rarely is he this creepy. It works here, though, and makes for a more horrific looking evil warrior to fight the Primal Age Justice League. The work on his creepy, cracked looking flesh is quite terrifying, particularly with those eerie red eyes. 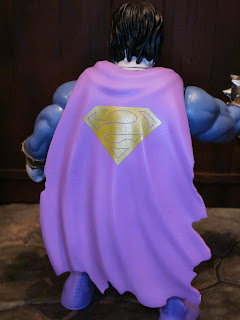 * Unlike the first series figures, Bizarro's cape is not removable. It is attached to the figure back and glued around the collar in the front. It looks good, though, and has a very cleanly printed gold reverse "S" on it, along with tattered edges. 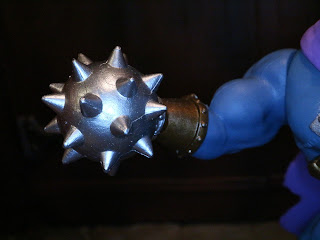 * In place of a right hand Bizarro has a large spiked ball. It's a cool feature that hearkens back to MOTU figures like Spikor and Trap Jaw and serves as some form of offensive weaponry for the figure. 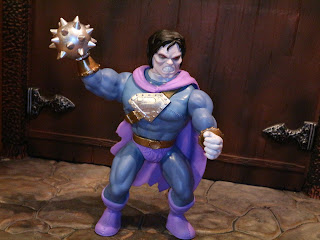 * The Primal Age figures are definitely built in such a way as to look similar to a Masters of the Universe figure or any other similar barbarian fantasy figure from the 1980s, although the hip joints are more traditional ball joints rather than the rubber banded legs of the vintage MOTU figures. Like the Target re-releases of series 1, these feel very sturdy and well made. 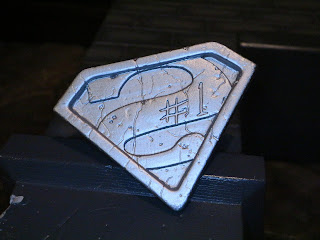 * Bizarro only comes with one true accessory: A reverse "S" shaped shield that clips onto his wrist. I love the look of this, especially due to the damage on the shield and the "#1" carved into the shield. Bizarro is #1, indeed! 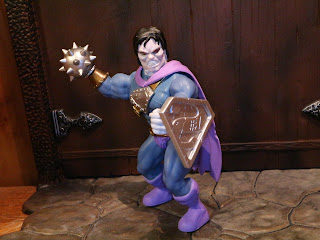 I really like Bizarro! While he doesn't have as many accessories as any of the series 1 figures he really has a very creepy, very intimidating look to him. I love the armored "S" logo and the spiked hand! They definitely make for a more unique looking figure and help separate this from any standard Bizarro figures. He's a Great and a 1/2 figure and another fun addition to this line. I'll be checking out the rest of this series over the next week or two, so stay tuned for more reviews! Hopefully we'll hear something about a series 3. This is just too good of a concept for Funko not to continue with more figures!