Toy Review: Wind Raider Attack from Masters of the Universe by Mega Construx 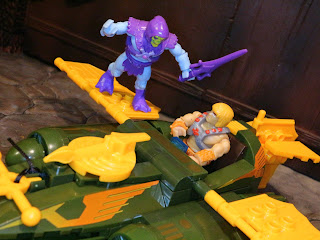 Last week I stumbled upon the Mega Construx Wind Raider Attack set and decided to scoop it up. I had seen it once before during the same toy run where I snagged the Battle for Eternia Collection, Man-At-Arms, and Evil-Lyn but I passed it up that time. The next trip, someone had spilled green slime all over the lone Wind Raider Attack set (probably from some other random toy on the shelf) and so I passed it up. I found a clean box at another Wal-Mart, though, so now I have this cool vehicle to show off. While Mega Construx has been moving rather slowly with this line they definitely seem to have more product planned for 2019, including a massive Castle Grayskull. This set comes in around $20 bucks and offers up a nice sized buildable Wind Raider with two minfigures of He-Man and Skeletor. While they're quite similar to the previously released figures they do have some minor differences that help them stand out a bit. Let's check this kit out after the break... 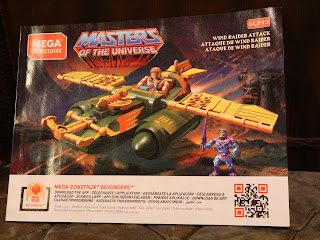 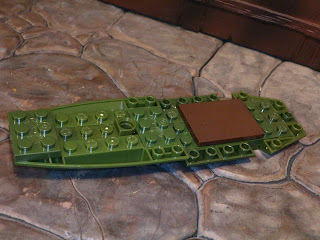 * I'm going to walk you through the build as I find it interesting. We'll take a look every 5 steps to see how things are going. First up, the quality of the Mega Conxtrux bricks definitely doesn't feel like Lego quality but it's close. They've radically improved and nothing fell apart or didn't fit right. The Wind Raider is mostly made from bricks of a very deep green. The flat brown slats on the right will be the base of the cockpit. 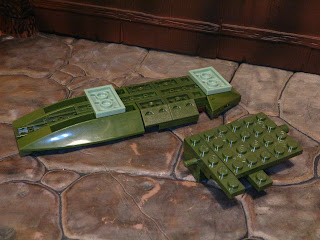 * To help secure the model while building it the Wind Raider uses two flat 2x5s as temporary pieces. I've never seen a Lego set (or any other building set) feature temporary pieces but it does help keep the model from breaking apart early on. The second piece is one of the engines, which was built separately. 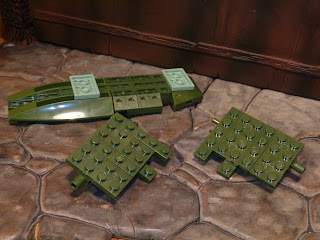 * Not much new to report here: Now I have both engines separately built. I will note that while the pieces don't come in numbered bags, like Lego, the instructions do feature images of what bricks are needed per step and they highlight the studs the new pieces will attach too. 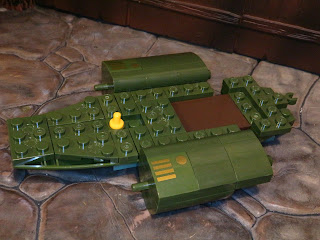 * Now we're starting to get somewhere. The engine panels (that could open on the Masters of the Universe Classics version) are printed pieces. No stickers are used in this set! You can also see an orange peg that will help to facilitate the working winch on he front and one of the clips for the tail fin on the back. 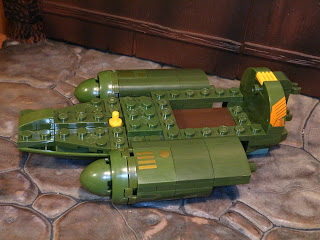 
* Big difference here! More printed bricks on the back as well as the front of the engines having been assembled and attached. The shape of the vehicle is really coming together here. 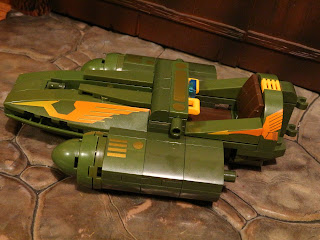 * Now we're cooking with gas! The cockpit has been installed (complete with handles and a blue light for the dashboard), more printed bricks to copy the stickers of the vintage toy, and the front is far more aerodynamic. 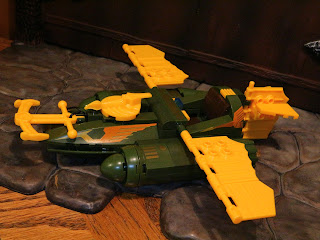 * And we're done! The wings and tail fin have been attached ash has the winch hook and winch housing on the front. It didn't take too long to build and was a fairly easy build. 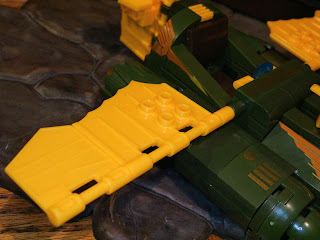 * The wings look really nice. I like the pegs on them as characters can stand on the wings for aerial combat! They do rotate up and down and stay on far better than I thought they might at first glance. 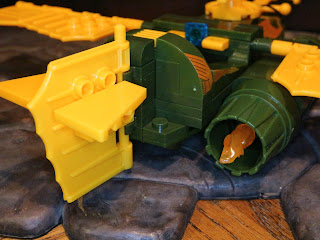 * The tail fin also can swivel left and right. The exhaust ports in the back actually have translucent flames coming out of them, something that makes for a rather cool little detail. 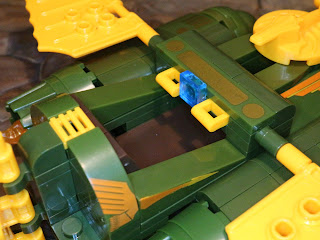 * The cockpit works great for the figures. They fit in easily and look nice inside. It only holds one figure (unlike the Filmation Wind Raider that was able to even carry Battle Cat along) and the pilot can hold the handles with ease. 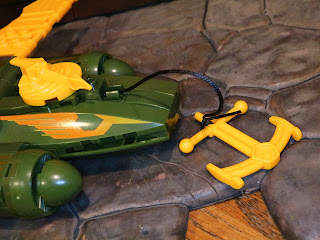 * The anchor on the front of the Wind Raider always seemed like such a strange feature to me. Maybe if it were at the rear it would make sense, but why at the front? Amazingly, the winch hook really does work. It pulls out and winds up by rotating the birdlike orange figurehead on the front of the vehicle. 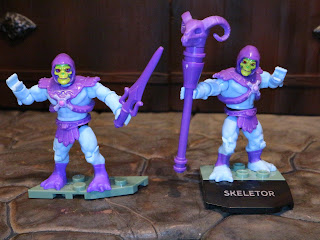 * The Skeletor included with this set (on the left) is quite similar to the Battle For Eternia Collection and single release Skeletor (on the right). The differences are that this Skeletor has fully booted feet (they're entirely purple), a darker purple gem on his armor, and he comes with a purple sword rather than the Havoc Staff. Also, he comes with an unusually shaped base rather than a display stand. 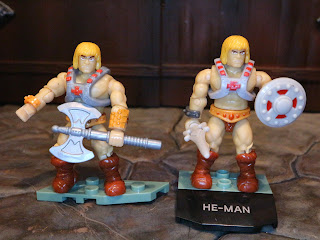 * This release of He-Man (on the left) also is incredibly similar to the previous release from the Battle of Eternia Collection (on the right) with his only differences being accessories. The new He-Man has an orange right wrist cuff instead of the previous one's silver cuff, a more silver-colored harness, the same Grayskull green colored base, and a silver ax. Thus far only Faker came with an ax, cast in orange, so this is a cool inclusion. 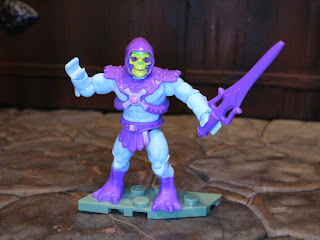 * Here's another look at Skeletor. These are incredibly cool little figures that can actually be customized quite easily. The figure comes disassembled, so you have to put him together. 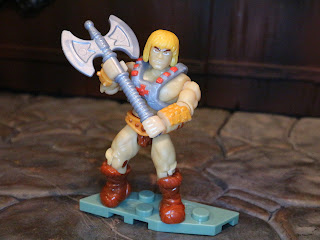 
* And here's He-Man. I love the articulation on these little guys. How cool does He-Man look wielding that ax with both hands? 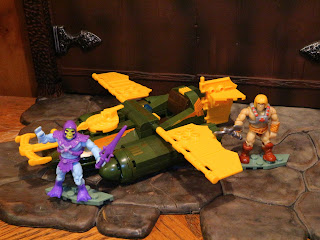 For the $20 dollar retail price, you're getting a lot here. The Wind Raider itself is a nice display piece that's quite fun to play with (you know you're going to "whoosh" this thing around the house!) and getting He-Man and Skeletor, even if you have the others, is still a pretty cool deal. This is a nice set and I'm hoping Mega Conxtrux continues to release more in the series. A Battle Ram would be really cool, wouldn't it? This is a Great and a 1/2 set and well worth tracking down. Including a flight stand for the Wind Raider would have been neat but what's here is still well worth the price of admission.

He-Man/ Prince Adam is one of my favorite characters and I've reviewed quite a few toys of him: The Series 3, Series 2 and Series 1 M.U.S.C.L.E. He-Man and Prince Adam minifigures, plus the Masters of the Universe Classics Galactic Protector He-Man, the future King He-Man, Laser Power He-Man, Snake Armor He-Man, and Flying Fists He-Man, the Super7 Prince Adam (Laughing) exclusive and Ultimates Filmation He-Man, the Mega Construx He-Man from the Battle for Eternia Collection, and the Funko VYNL Prince Adam + Cringer set.


For more Masters of the Universe: Mega Construx reviews, check out the following:
Battle for Eternia Collection
Evil-Lyn
Man-At-Arms
Posted by Barbecue17 at 4/13/2019