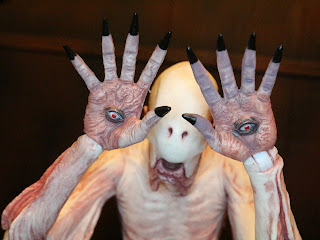 Last year NECA released the first figure in their new Guillermo del Toro Signature Collection, Santi from The Devil's Backbone, and now they're preparing for a trifecta of characters from 2006's Pan's Labyrinth. First up is the Pale Man, a creepy creature portrayed by Doug Jones whose visage is probably the most memorable part of the film. If you asked me to name my favorite del Toro directed film, I'd probably have to go with Pan's Labyrinth, so it's a real treat to have some extremely nice action figures based off of the film. I was fortunate to catch the movie during it's limited US theatrical and I've been a fan ever since. This line is very cool as it really reminds me of the figures from NECA's Cult Classics and clearly feels like a labor of love on NECA's part. Let's check out this creepy eater of children after the break... 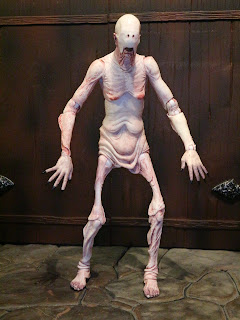 Accessories: Chair and plate with eyeballs. 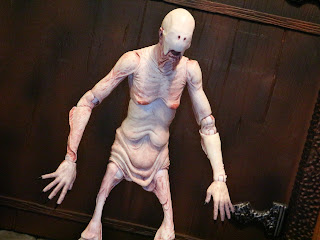 * The sculpt here is unreal. The Pale Man is one of the creepiest, strangest creatures in film and NECA has perfectly captured the creature's emaciated appearance. While the film is extremely open to interpretation, del Toro has state "the Pale Man represents all institutional evil feeding on the helpless." A creature that apparently feeds and feeds, never getting full, the grotesque, almost skeletal limbs and flaccid skin make for one of the best showings of NECA's talented sculptors. 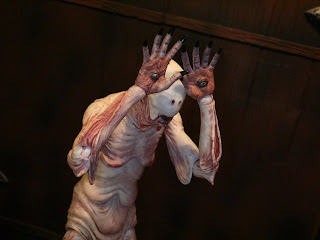 * The upper body has excellent articulation with plenty of joints on the elbows, wrists, and neck/head to allow for some terrifically expressive poses. Like the Japanese tenome, the Pale Man sees with the eyes in it's hands rather than any eyes in it's face. 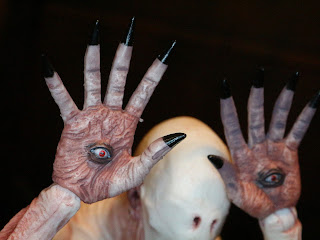 * Check out the hands! Eyeballs in the palms and large talon like finger nails? This guy would definitely be the last fellow you'd want to shake hands with, right? This is more killer work from NECA. This figure is legitimately creepy! 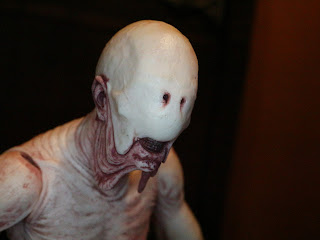 * Here is the Pale Man's visage unobstructed by his hands. The teeth and ears are insanely well defined while the faces is formless with only nostrils. For the costume in the film actor Doug Jones actually used the nostrils to see out of. The head kind of reminds me of NECA's Licker from the Resident Evil 10th Anniversary Line. 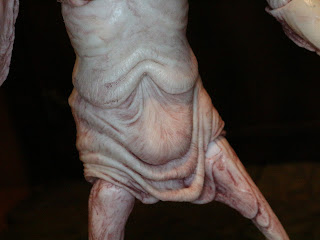 * Yuck! While the Pale Man's skin might look disgusting, it does hide the articulation quite well. You'll hardly notice any of the joints thanks to the skin. The paintwork and molded plastic colors here really work to convey the flesh of the Pale Man. 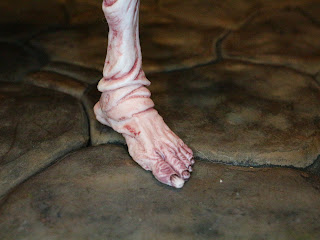 * The feet on this figure are just nasty. The toenails are absolutely hideous! NECA, you're just too good at sculpting gross things! 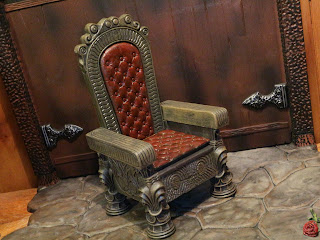 * The Pale Man comes with one of the coolest accessories of 2019 thus far: An ornate chair. The Pale Man sits at this chair in the dining room where Ofelia encounters him. It's a beautiful accessory: Large with gorgeous paintwork, an ornate sculpt, and so much presence on the shelf. 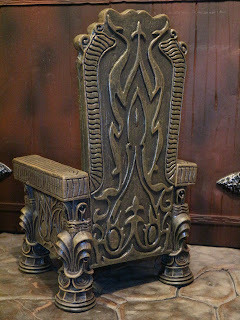 * Every leg of the chair as well as the back shows off beautiful sculpting. I have a feeling that this is going to be one of those pieces that folks want to get their hands on just because it's so impressive and can add elegance to any display. 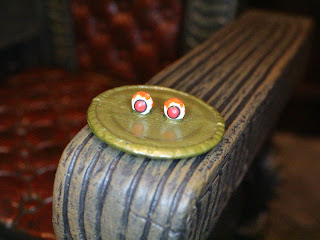 * Last, but certainly not least, the Pale Man comes with the plate that holds his eyeballs. The eyes rest on a simple gold platter. They're not removable (can you imagine trying to find them if you dropped them!) but they look like separate objects on the platter. 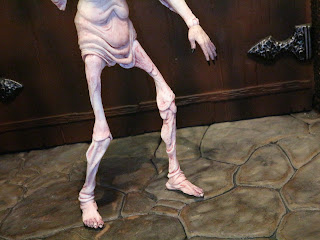 * How does the Pale Man stand? Amazingly well! Surprisingly, while he has scrawny legs, he can stand up just fine and sit in his chair perfectly. He's not the most well articulated from the waist down but NECA did a great job of ensuring that the figure was designed to stand perfectly and to sit perfectly, which is about all you need. 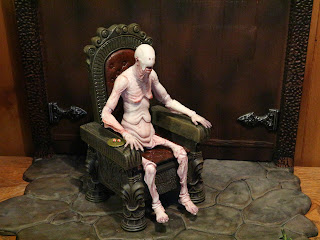 While he sells for around $35-$40 bucks (shop around for a deal) the Pale Man easily feels worth it. He's a completely unique (and amazing) sculpt of a character that we'll likely never see again in toy form. Plus, you get the incredible chair accessory. This is an Epic release in one of the lines I'm the most excited to see where it goes. Ofelia and the Faun are slated to come out soon with the Amphibian Man from The Shape of Water coming this fall. Who knows if we'll get more figures in the future? I'm hoping for the ghost mother from Crimson Peak! If anyone can pull that off, NECA can! I'd love to see a John Carpenter collection, too. That'd be incredible, NECA.


This is the first figure of the Pale Man I've reviewed. For more reviews from The Guillermo del Toro Signature Collection, check out the following:
Santi from The Devil's Backbone
Posted by Barbecue17 at 4/09/2019