Action Figure Review: She-Ra from He-Man and the Masters of the Universe by Super7 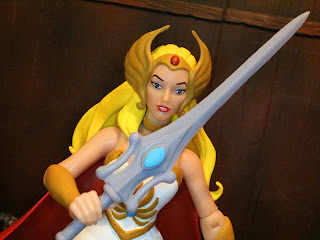 Today I'm checking out the final figure from Super7's third series of Club Grayskull/ He-Man and the Masters of the Universe figures: She-Ra, Princess of Power! I'm a huge She-Ra fan and this was easily my most anticipated figure in this series but I have to say that while She-Ra should have been one of the biggest home runs of the line, she ended up being quite a bit disappointing. Super7 is doing a great job at releasing lots of product for Masters of the Universe and they clearly have a lot of passion for the property. Unfortunately, their quality control can be all over the place. Read a few other reviews or visit the forums at He-Man.org and you'll discover that some folks have gotten some bad She-Ra figures. I don't mean bad in the 90s way that meant good, either. I mean mismolded skirts, bent/broken tiaras, and eyes completely mis-stamped. I feel pretty fortunate that my She-Ra turned out OK but she's still not completely ideal, particularly for the price of these figures. Let's check her out after the break... 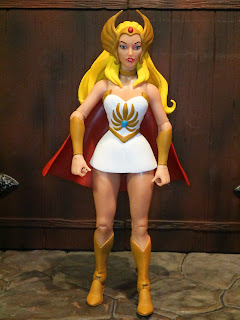 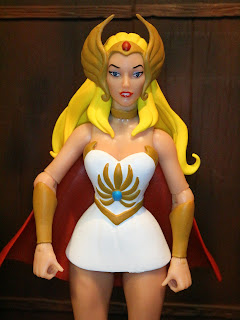 * I will give Super7 credit for making a very nice looking action figure so far as paint and sculpt go. She-Ra is bright, colorful, and matches her Filmation counterpart extremely well. Super7 has been doing a nice job of capturing the look of the cartoon characters in three dimensions (something that's not always easy to do) and She-Ra is no exception. Her red cape is not removable like on the previous Mattel MOTUC She-Ra figures 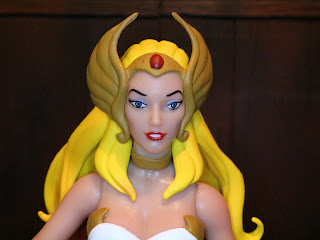 * I didn't have any problems with the tiara on my figure, so Super7 gets a positive mark here. I also don't mind the paintwork, the collar, and the hair. All of that looks good. She-Ra's portrait is definitely one I'm rather mixed on and I'll point out the negatives in a second. Now, I don't think she's a "bad" figure at all. She looks quite nice, but there are some misses that shouldn't be present on Super7's lone figure of a character of this caliber. 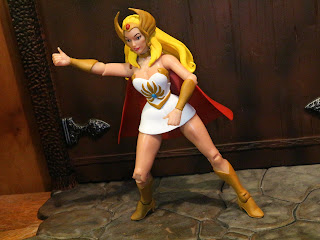 * The articulation is in some way decreased from previous figures (no bicep swivels, hip swivels, or boot swivels) but the figure does have the swivel/hinge wrists and swivel/ hinge ankles that Super7's figures have. She feels solid and sturdy and is still a fun figure to play with. 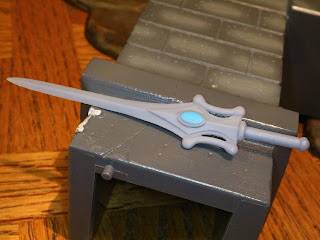 * She-Ra comes with three accessories, the first being her Sword of Protection. Rather than having an inlaid jewel like the MOTUC versions, this one simply has a painted blue jewel to make it look more accurate to the animated design. 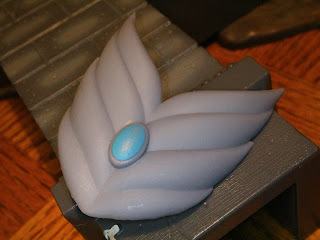 * Second up is She-Ra's sword again, although this this time it has been transformed into a shield. Since the Sword of Protection could transform Super7 was able to offer up some different versions of the weapon. There's a handle on the back for She-Ra to hold and, of course, the painted blue gem is on the front. 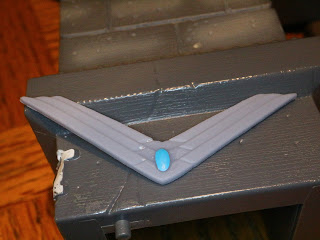 * Sword to boomerang is a transformation seen in the Filmation episode Welcome Back, Kowl, in which She-Ra uses the boomerang to destroy one of Shadow Weaver's magical artifacts. It's a cool looking transformtation and possibly a bit easier to make into action figure form than sword to smokescreen. 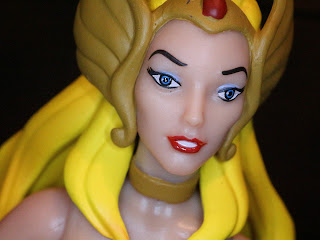 * There are two things about the portrait I don't like. First, Super7 continues to use a waxy, semi-translucent plastic that doesn't capture the likeness of the character's skin terribly well. Second, look around the eye: It appears that the painted eyes don't match up with the area on the sculpt. It's weird and She-Ra's eyes should have been given a but more attention to ensure they looked perfect. 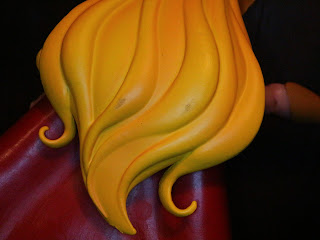 * The back of She-Ra's hair has some odd scuffs that probably came from the figure not being given time to try before being packaged. 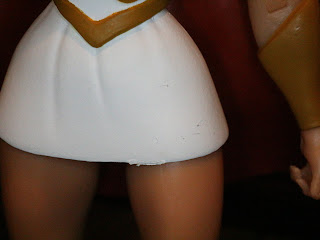 * Last, notice the odd molding defect on the hem of She-Ra's skirt. Mine isn't as bad as some I've seen but it's still a clear defect. 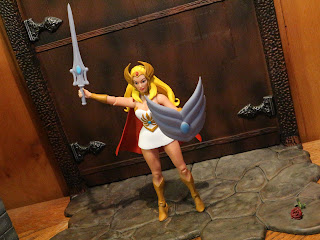 She-Ra is a Good but flawed figure. I like her accessories and the paintwork is colorful and well done for the most part. Still, considering she's one of the two leads of the Masters of the Universe franchise she deserved better. This should have been on par with an Ultimate release and released with amazing quality control. I usually hate to say I'm looking forward to a re-do but I do hope Super7 revisits her again in the Ultimate format with alternate portraits. She's Good, but she deserved to be one of the best figures in the line.


So far the only She-Ra/ Princess Adora figure I've reviewed on this site is the Masters of the Universe Classics Galactic Protector She-Ra.