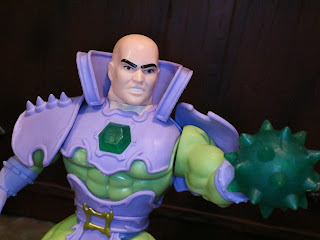 You'd think I would be talking about Avengers: Endgame today, wouldn't you? I saw it last night and it was incredible. Unfortunately, I don't collect that many Marvel toys. Instead, I'm checking out the penultimate figure from Series 2 of Funko's DC Primal Age line and this time it's Superman's arch nemesis Lex Luthor! I'm really glad Funko delivered a version of Lex in his battle armor as it not only is one of my favorite looks for the character but it also translates so well into the sword and sorcery style of DC Primal Age. I enjoyed the exclusive comic that Target released alongside of series 1 and I'd really love to see it developed as an ongoing series. How great would that be as an ongoing Elseworlds tale? There is just so much potential there! Let's jump in and check out Lex Luthor after the break... 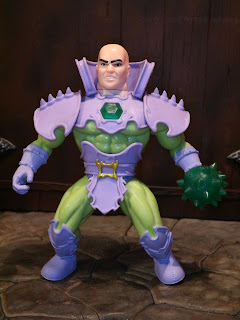 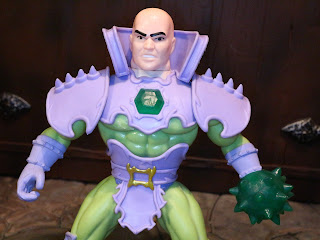 * Lex Luthor looks insanely formidable here! While he's got a lighter color palette, it works well for the figure. I love the green and purple together here (of course, that's more of a credit to George Perez who designed the original power armor this suit is based on). The armored pieces are mostly separate pieces attached to the figure, giving Lex a much bulkier, armored appearance. 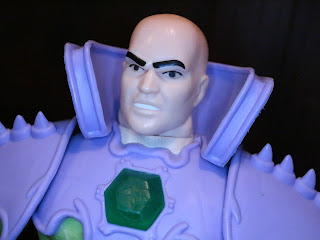 * The headsculpt is quite good. Funko has done a nice job of injecting a lot of character into the headsculpts and Lex is one of the best. Despite him just being a bald guy, the headsculpt makes him look like a strong, angry, powerful opponent. The expressive eyebrows definitely help, too! 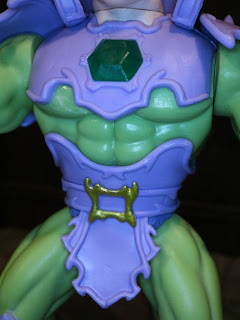 * The armored belt and loincloth is really cool and certainly seems a bit regal, too. Perhaps even sorcerer-like. Considering the power of Kryptonite, Lex Luthor could function in Primal Age as an evil sorcerer of sorts, exploiting the powers of Kryptonite for various purposes. He also has a translucent chunk of Kryptonite on his chest. I love it! 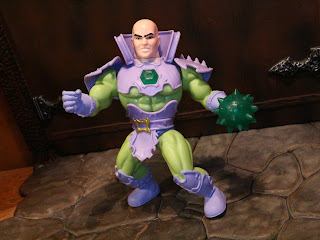 *  The Primal Age figures are definitely built in such a way as to look similar to a Masters of the Universe figure or any other similar barbarian fantasy figure from the 1980s, although the hip joints are more traditional ball joints rather than the rubber banded legs of the vintage MOTU figures. Like the Target re-releases of series 1, these feel very sturdy and well made. Probably even better than those releases, actually. The quality has greatly improved. 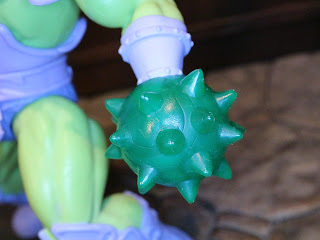 * Like Bizarro and Superman, Lex Luthor's has a spiked ball in place of a hand. Lex's is the coolest because it's molded in a green plastic to look as if it is made of Kryptonite. That's a very cool detail and just seems like a fun idea for a toy. Why do three figures from this series have spike balled hands, though? Perhaps this was used to ensure that these figures were different enough from the standard designs for the characters as Mattel still currently has the DC license for the rest of the year. Apparently Funko can make these since they are unique designs that they themselves created. 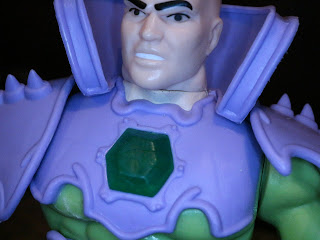 
* This might be hard to see in the picture but Lex Luthor's neck looks a bit odd. The purple he is presumably molded in is showing through underneath the paint of his neck. It's not terrible but it is noticeable in person. 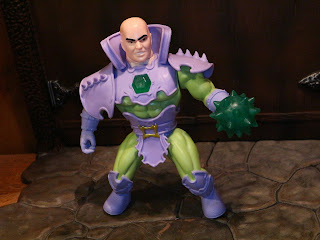 With DC Primal Age Series 2 Funko really improved the quality of the figures. These guys feel even more durable than the Target Series 1 figures (which themselves were an improvement over the original Amazon releases) and just seem to have a better plastic quality. Luthor has a great design and I love the Kryptonite mace in place of his hand. It's kind of unfortunate, though, that he doesn't come with any other accessories. Nothing at all! A kryptonite bladed sword or a Kryptonite tipped spear would have been excellent extras. He's a Good and a 1/2 figure still, although I hope Funko doesn't cut back on the accessories if a Series 3 ever does materialize.

For more DC Primal Age reviews check out the following: