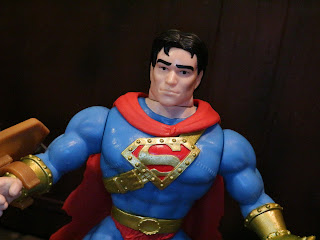 Today I'm wrapping up series 2 of Funko's DC Primal Age line with a look at Superman! Yes, the Man of Steel is finally in this sword and sorcery inspired DC line and he looks pretty cool. It's interesting as DC actually pumped out a few DC Comics back in the day (at one point they handled the minicomics, too and jumped back into the MOTU comic scene in 2012) and Superman has been a recurring character in MOTU many times. Now fans of the vintage styled MOTU figures will have a Superman to pal around with the brawny, burly Eternians. Apparently Funko was able to release this series of figures even while Mattel holds the master DC toy license (which they lose next year) because these are Funko's unique designs for the characters. Funko had to go out of the way to ensure that these figures looked different from their classic counterparts which is probably why three of the figures in series 2 have giant spiked maces for hands. That's a pretty easy detail to point to if you're trying to defend that your designs are completely unique. It's an odd choice for Superman, but it's also kind of cool, too. Let's check out Superman after the break and see how he fairs in the realm of barbarian fantasy... 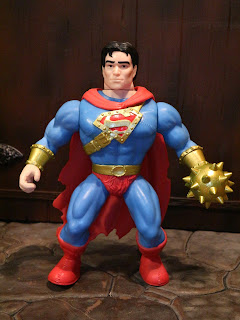 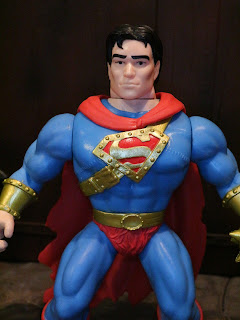 
* Here's a Superman! As you can see, he still is very, very recognizable as the Last Son of Krypton even though there are plenty of details that show off his swords and sorcery inspiration. Little things like the visible stitches on his suit, the furry trunks, and the bronze bracers make him seem just a little bit more savage than the average depiction of Clark. 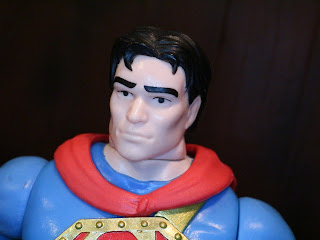 * The headsculpt is a nice rendition of Superman in the barbarian fantasy/ MOTU style. He looks handsome, heroic, and has the trademark dark hair of Superman. He's not crazy expressive but he looks ready to fight evil at the drop of a helmet. 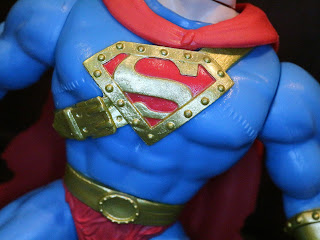 * I love the way that Supes' chest symbol is a piece of armor strapped around his torso. Bizarro has the same feature although Superman has the correct logo, unlike Bizarro. 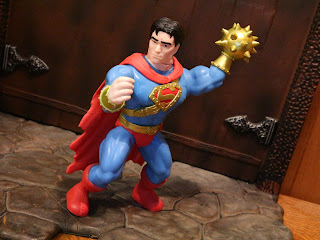 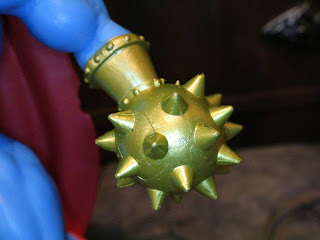 * In place of a left hand Superman has a large spiked ball. It's a cool feature that hearkens back to MOTU figures like Spikor and Trap Jaw and serves as some form of offensive weaponry for the figure. You can imagine Superman doing some real damage with this thing, can't you? 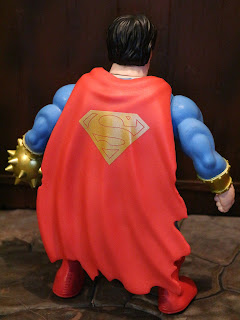 * Unlike the first series figures, Bizarro Superman's cape is not removable. It is attached to the figure back and glued around the collar in the front. It looks good, though, and has a very cleanly printed gold  "S" on it, along with tattered edges. 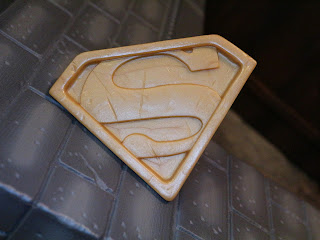 * Bizarro only comes with one true accessory: A "S" shaped shield that clips onto his wrist. I like the look of this, especially due to the damage on the shield. 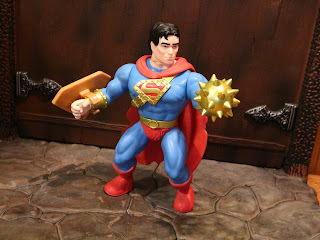 I really, really like Superman. He turned out so well and is easily one of the best figures in the entire series. Series 2 of DC Primal Age turned out fantastically overall with fewer flaws and sturdier figures. While the figures do have fewer accessories, they're still quite fun. Who know if Funko will ever release a third series but if this is what we got, it turns out we have a pretty nice collection. This is an Epic Superman figure that should please Superman collectors and folks wanting a Superman to pal along with their MOTU figures as well. Being unique in his own way while still being instantly recognizable is a testament to Funko's great design work here.