Action Figure Review: Orko from Masters of the Universe ReAction by Super7 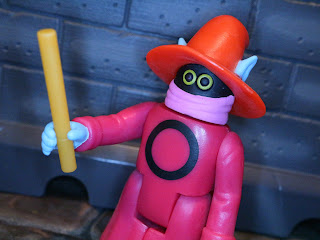 Today I'm checking out another figure from Super7's most recent series of Masters of the Universe ReAction figures and today I'm looking at the always lovable Orko! Created for the Filmation cartoon series He-Man and the Masters of the Universe, Orko didn't appear in the vintage toyline until the 1984 series of action figures but he's typically always thought of as one of the most important characters in the series. I'm really glad to have Orko in this line. As a smaller character, Orko reminds me of other smaller vintage figures from Kenner's Star Wars line such as Yoda and the Ewoks. Let's check out this powerful, if unpredictable, Trollan magician after the break... 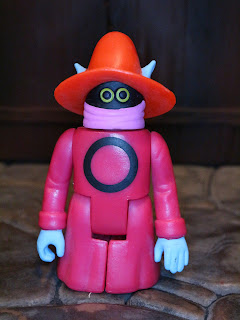 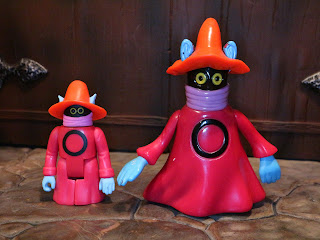 
* Here's a quick look at Super7's Orko (on the left) and Mattel's vintage Orko (on the right). Mattel's Orko was fairly accurate to his Filmation counterpart and this one follows in that tradition. He doesn't have a removable hat like the vintage figure, though. 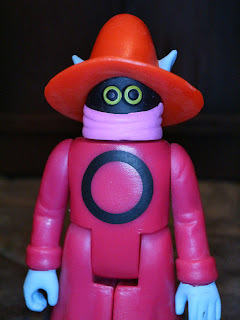 
* I really like the sculpt here. Bright and colorful, though simple, really captures the look of both the vintage toy and the Filmation cartoon character. The "O" is just printed on but it is rather neat and clean. Furthermore, I like how his left hand is posed as if Orko is casting a spell.

*  If you've ever picked up a retro figure like this, you probably know what to expect: 5 points of articulation and all swivel joints. Orko feels quite well made and sturdy and definitely of a better quality than some of the earlier ReAction figures that Funko put out. Super7 has been very consistent in the quality of their ReAction lines over the past couple of years. 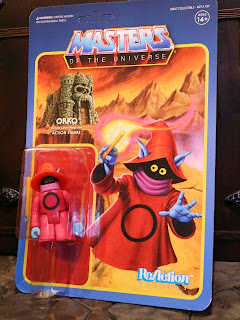 * The card art on most ReAction figures released by Super7 is beautiful and their Masters of the Universe line is no exception. Orko features a beautiful illustration of the character by Jason Edmiston. To preserve the card I actually made a slit in the top of the blister so I can slide the figure in and out. It work great and allows the figure to be displayed inside and outside of the card. I've got mine hanging on a metal pegboard similar to what you'd see in a retail store! 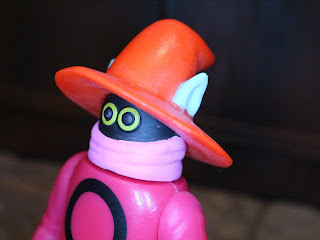 * The headsculpt looks pretty good, too. I like the eyes and the work on the hat as well. 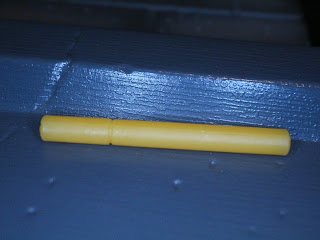 * Orko comes with a pretty simple accessory: A magic wand. This isn't an accessory that the vintage figure came with (he came with a ripcord and a magic trick) but it does seem to resemble the wand Orko carries sometimes in the Filmation cartoon. While the 200x Orko and the MOTUC Orko carried more detailed wands, this one is pretty simple. It does have a little ridge about a third of the way up to, I presume, to give Orko a better grip. 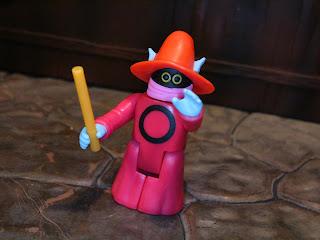 Orko is one of my favorites in this series, partially because I love Orko so much but also because I think Super7 did a really nice job. I know that these figures are not everyone's cup of tea but for MOTU fans and folks who dig the faux-vintage action figure aesthetic, these are really cool. Orko is a Great figure in this series and is simply a fun figure to add to any display or collection! 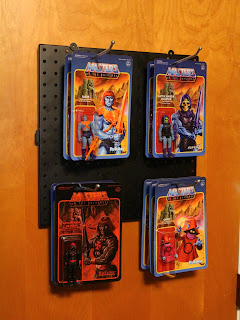 Just for fun: Here's a quick look at how I have my MOTU ReACtion figures displayed! I actually slit the top of the blister so I can take the figures in and out but put them right back on. They store so well on the card! I'm planning to find a cool vintage styled MOTU logo to put above the metal peg board to enhance the retail shelf vibe here. I may add another row or two as well to allow for more figures to be shown on the front rack.


If you're an Orko fan I've also reviewed the green Orko M.U.S.C.L.E. minifigure from the #1 Masters of the Universe set by Super7.

For more Masters of the Universe ReAction figures, check out the following:
Evil-Lyn
Faker
Mekaneck
Posted by Barbecue17 at 4/22/2019