Action Figure Review: Mantenna from He-Man and the Masters of the Universe by Super7 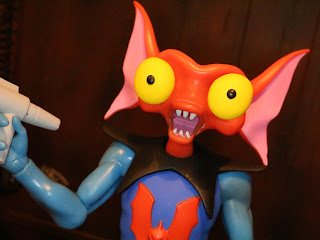 It's been over five years since I reviewed the Masters of the Universe Classics Mantenna from Mattel which was an incredible figure that combined elements from the vintage figure, 200x Staction, and the Filmation cartoon. Today I'm checking out Super7's Mantenna from the He-Man and the Masters of the Universe/ Club Grayskull line and this one is strictly based on the Filmation cartoon series. Mantenna is definitely one of the main members of the Horde in the Filmation series so he's a great choice for the line. Super7 did an incredible job with this figure and really went all out to give us one of the best figures in the Club Grayskull line to date. Let's take a closer look at poor ol' Mantenna after the break... 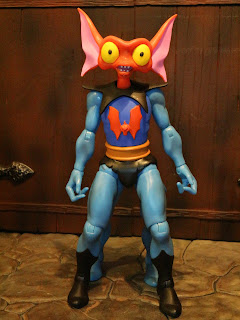 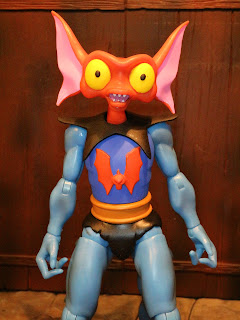 
* Mantenna looks great. He seriously is one of the best looking figures in the Filmation inspired line yet. Super7 did an excellent job with his coloring and the sculpt, matching him perfectly to his cartoon counterpart. He seems to be completely new with few, if any, reused parts. Mantenna easily has the best presence of any figure in this series and possibly of any Club Grayskull from the line since Super7 took over. 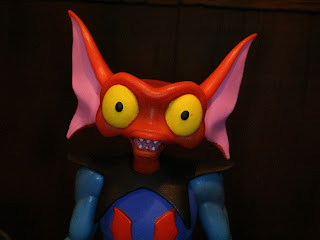 *The headsculpt is perfect! While Mattel tried to blend together the vintage toy Mantenna and Filmation Mantenna in the MOTUC toy, Super7 straight up captured the weirdness of the Filmation Mantenna. He's such a funny looking character and the facial expression is just perfect. The humongous ears are pretty great, too. 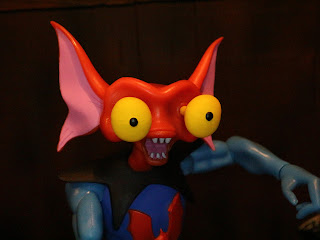 * While the MOTUC Mantenna featured interchangeable eyes, this Mantenna features a second headsculpt with bugged out eyes and a wide open mouth. This is Mantenna right after Hordak tells him to "go stand over there..." The heads are mounted on a true balljoint and swap out quite easily. 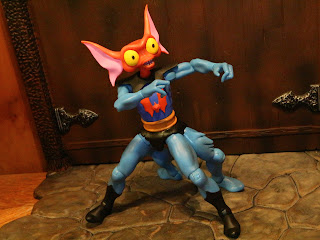 * Mantenna not only has great articulation but he has more of it than most other figures. Mantenna feels like one of the highest quality figures that Super7 has put out due to the excellent articulation and the solid feel of the figure. 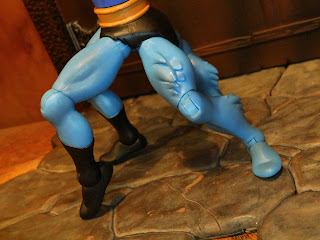 * Mantenna has four legs, all fully articulated, and not only do they look cool but they make him way more fun to pose and display. You can really do some coo stuff with Mantenna by fiddling around with his legs. He's exceptionally fun to play with. 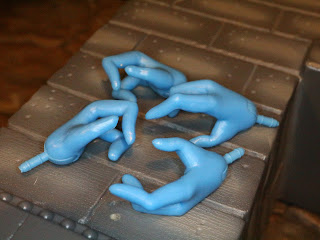 * Interestingly, Mantenna comes with four interchangeable hands. One pair has more of a closed grip for holding accessories while the second pair is open and more expressive. They're not necessary, as Mantenna can hold his blaster in either right hand, but they do add to the posing of the figure. Man, Super7 really went all out on Mantenna, didn't they? 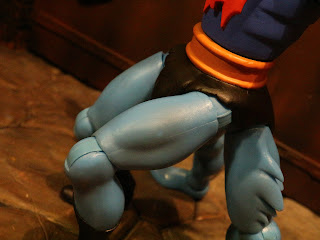 * One thing I really like about Mantenna is that he actually has some shading on his legs. While he still is a dead ringer for his animated self, the shading does add another layer of depth to the sculpt. The paintwork overall is really clean on this guy and even features little flourishes to help it stand out. 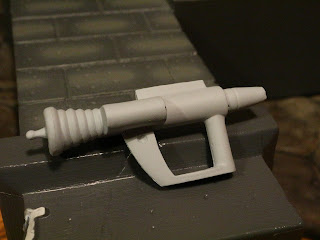 * Rather than a Horde crossbow like the vintage, Staction, and MOTUC figures, this Filmation inspired Mantenna includes a Horde blaster. I really like this blaster pistol as it looks menacing while still having a great simple, clean Filmation look. Great stuff! 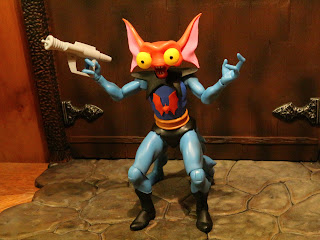 While I haven't reviewed the Club Grayskull She-Ra yet (probably later this week), I think it's pretty safe to say that Mantenna is the clear winner from series 3 of Super7's Club Grayskull line. These aren't cheap figures by any means and while they're solid figures, some folks will feel hard to justify the price unless they'e die-hard He-Fans and She-Ravers. Mantenna is definitely a figure that feels closer to being worth the price. He's a Great and a 1/2 figure and easily one of Super7's best efforts. We're getting a nice Filmation Horde from Super7 so let's hope more of that crew is on the way soon!


If you're a fan of Mantenna, go stand over there and check out the MOTUC Mantenna.