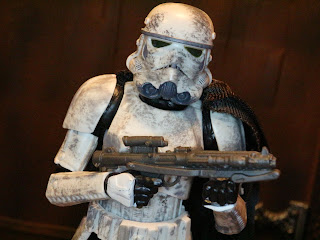 While we're still smack dab in the middle of Re-Halloween I'm jumping back in to reviewing some action figures I've acquired over the past few weeks. Lots of cool new stuff has come out lately and today I'm checking out a new figure from Star Wars: The Black Series: The Mimban Stormtrooper! Officially known as the Wet-weather gear Stormtrooper, these troops wear modified basic Stormtrooper outfits in order to fight off the wet and swampy terrain of the planet Mimban. Man, how cool is it that Solo used Mimban? Mimban first appeared in Splinter of the Mind's Eye (which I believe was the second Expanded Universe novel I ever read!) and has shown up a number of times over the years. Man, Solo was filled with great references to the Star Wars universe, wasn't it? Anyways, the Mimban Stormtrooper is a Wal-Mart exclusive and, fortunately, it seems like he's quite readily available. I've seen these guys in their distinctive black and grey packaging at nearly every Wal-Mart I've been too so hopefully that's a good sign. Let's check out the Mimban Stormtrooper after the break... 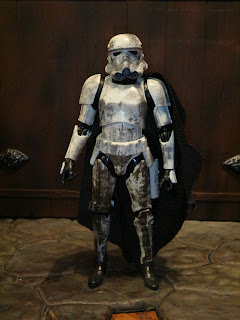 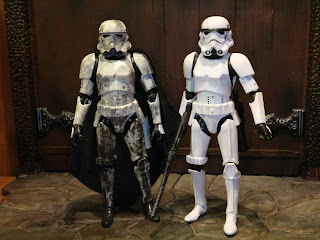 * While the Mimban Stormtrooper features a new head and a new cloak, he still shares the standard body with the basic Stormtrooper we've seen since 2014. That's OK, though, as it's still a solid sculpt. The articulation feels more solid and less rubbery here, too, so that's an improvement. 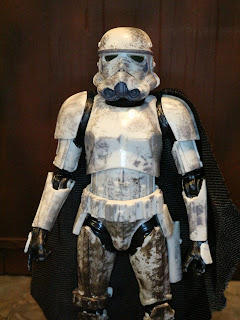 
* Again, we're using the same body that we've seen for Stormtroopers many times but this time Hasbro has cast the plastic in an off-white color and given it lots of paint applications to recreate the look of armor covered in mud and muck. It's a pretty solid look and, coupled with the presence of the cloak and new helmet, definitely makes for a unique looking figure. 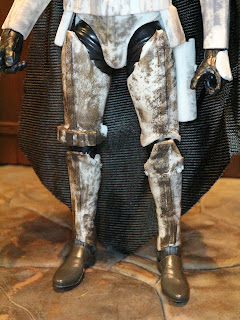 * The boots are really muddy. Again, the paintwork is quite impressive and definitely makes this guy feel very unique. I believe the boots are supposed to be brown on these guys, which was handled correctly here, too. 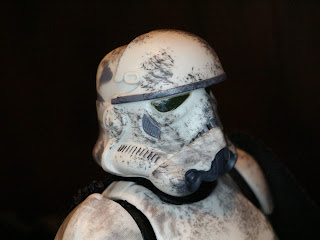 * The Mimban Stormtrooper/ Wet-weather Gear Stormtrooper has a helmet that is slightly different than the standard Stormtrooper. It has a more armored forehead which is supposed to house some extra targeting computers to help the troops fight in battlefields with intense weather. It's a solid looking helmet with a great design and a nice mixture of clean detailed paint applications and messy "mud" applications. 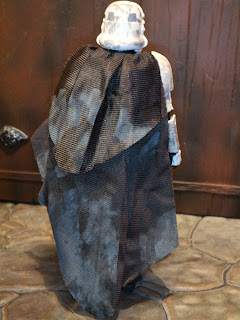 * The Mimban Stormtroopers come with weatherproofed cloaks and Hasbro has added a pretty nice cloak on the back of this figure. Not only does it look great but it has a really cool "feel" to it. It feels like a weatherproofed material of sorts. It also has some weathering to it that gives it a worn look. It's pretty cool! 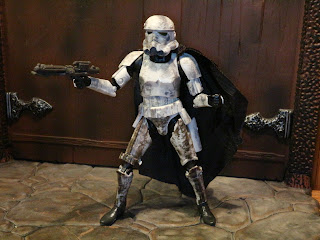 * While the Mimban Stormtrooper has the same articulation as most other Stormtrooper figures that have come before, the elbows and knees feel much more solid and far less rubbery than previous efforts. He's a fun figure and while the articulation may need an upgrade at some point, it's still pretty good for a mass market toyline. 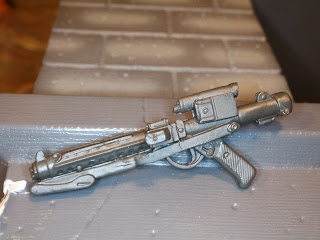 * The Mimban Stormtrooper comes with one of the modified E-11 blasters that we saw included with many of the Rogue One figures. It doesn't have any paint applications but it looks nice and is still a cool accessory. Other Mimban Stormtroopers (the S.H. Figuarts version and Hasbro's 1/18th scale versions) come with different weapons, including an E-10 and a long blaster rifle of sorts, which sadly were not included. 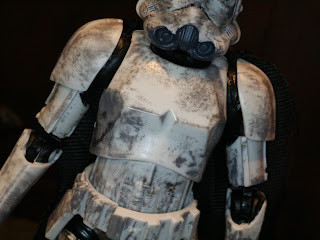 * Some of the Mimban Stormtroopers in the film have bandoliers. It's a real shame that Hasbro didn't give the figure a removable bandolier so that collectors could army build these guys more effectively. 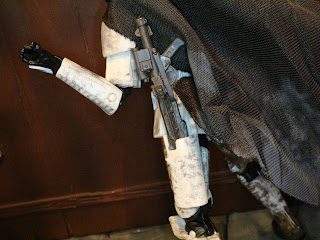 * Since this figure reuses the body from the original Stormtrooper, the Mimban Stormtrooper has the same holster as that figure. Unfortunately, since the Mimban trooper has the modified E-11, the blaster won't fit inside of the holster. Oops! That's a big no-no in my book. He should have had a new belt molded for this figure, as the accessory just cannot fully function with this figure. 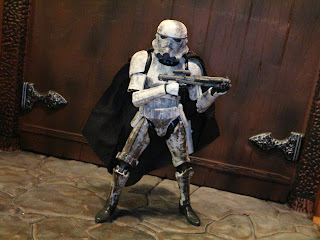 While he has a lot of reuse, there is also quite a bit of newness to the Mimban Stormtrooper that makes him feel like a worthwhile pickup. I love the overall look and feel of the figure, particularly the weathered paintjob. I do wish we had gotten an extra blaster or two, however (las well as a functional holster!) as well as the bandolier that many of the troops use. The Mimban Stormtrooper is still a Good and a 1/2 figure, but he could have been a bit better, especially considering how much reuse is present.